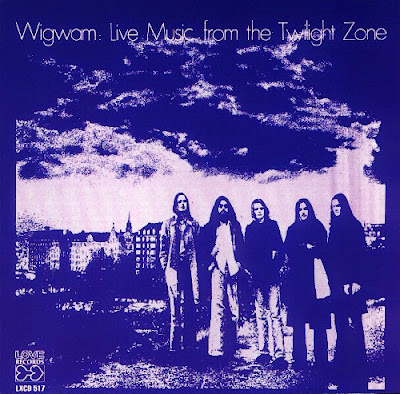 
Recorded only a few month before the known departure of Gustavson and Pohjol, "Live Music From The Twilight Zone" captures WIGWAM at their creative height. Originally released as a double vinyl album, this is some pretty amazing music recorded over 3 nights and according to documentation was the last live show for WIGWAM with their mark One progressive line-up. Members included Ronnie Österberg (drums), Jukka Gustavson (vocals, organ), Jim Pembroke (vocals, electric piano), Pekka Pohjola (bass), Pekka Rechardt (guitar). WIGWAM were known for delivering some pretty crafty live shows often not really playing a lot of their studio tracks but instead improvising and building on themes of other songs... someone once suggested WIGWAM were the GRATEFUL DEAD of Progressive rock !

Fitting true to this state, WIGWAM open up side one with a shattering and explosive 17 mins cover version of "The Band's" "The Moon Struck One" which originally appeared on The Band's 1971 Cahoots album as a 4 mins song!. The Beatles are borrowed for "Let It Be" and "Imagine" which are very tastefully re-done with heavy organ grinds and guitar soloing. Again a lot of live energy is put into these tracks and I love the heavy deep organ welts that kind of make your speakers resonate and vibrate. What is amazing on this live concert is that only 1 track is from any of their previous studio albums ("Pig Storm" from Nuclear Nightclub). Lots of improvisation here and these guys get into some pretty heavy and tripped out grooves... without a question WIGWAM were something pretty special and one of my fav's from the Euro 70's prog era.