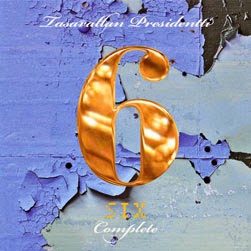 I bought this CD last year but haven't listened to it more than three times. The problem, I guess, is in me rather than in the quality of the music, which is high, no doubt. TP has a strong reputation as the leading Finnish progressive band (founded already in the 60's), and while WIGWAM, its best known rival, took a pop-oriented path in mid-70's, TP has kept the course on jazz-oriented, blues-flavoured rock focusing on instrumental skills. For example guitarist Jukka Tolonen and flute/saxophone player Juhani Aaltonen are both among the most respected musicians of their fields here. Six Complete was long awaited new studio album of the legendary group, and it received quite fair welcome (though not very visibly as far as I see).

But do not expect very PROGRESSIVE sounding album. The British-born vocalist Frank Robson sounds even bluesier than almost 30 years ago, and also the compositions seem to be relatively straight-forward bluesy jazz-rock stuff. What I personally miss is the more emotional, delicate side to the music, as well as the clearer progressive structure to the songs. Funny, if the old TP reminds me of the bluesy side of PROCOL HARUM here and there (not only in the voices of Robson and Brooker), this album left me the similar disappointment as Harum's Wells on Fire, especially in the sense that the compositions don't make a big impression on me.