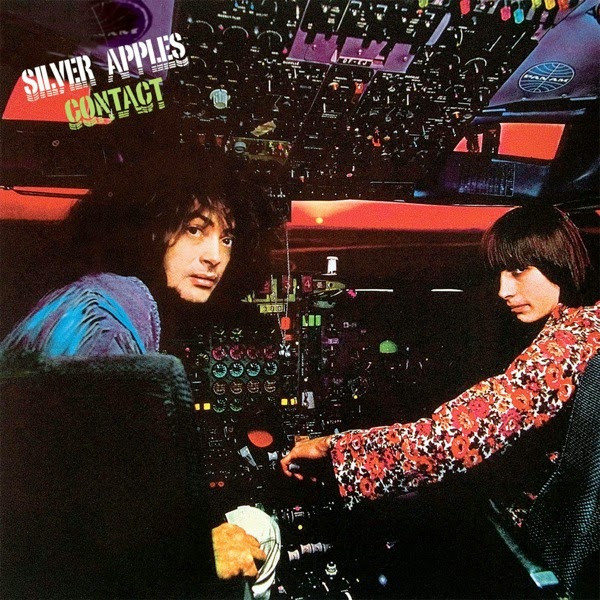 “The amazing thing is they make absolutely mind shattering music with all this junky equipment” – The East Village Other, 1968

This NY duet's second album, released in 69, is much in the artistic continuity of their s/t debut, but there is a notable difference, with leader Simeon also adding some banjo to their soundscapes, even if the said-instrument was often played separately from the rest of the instruments.
Opening on an electronically-simulated jet-airplane take-off, Contact presents a slightly different and more varied nature than its predecessor, including some two or three tracks that feature solo or mostly the banjo, which stick out like a sore thumb. The vocals can take on a Robert Wyatt-like feel, some other soundscapes reminiscent of the early Soft Machine, but for the most part, it remains much life their debut album.

With no support from their moribund label, Kapp, for their May 1968 debut LP, electronics wizard Simeon Coxe and ace drummer Danny Taylor chose to embark on a gruelling coast-to-coast promo tour, co-ordinated by their manager Barry Bryant. They played prestigious gigs at the Fillmore West and Andy Warhol’s Factory, but Cox’s homemade assortment of soldered-together oscillators (‘the simeon’) made gigging a complicated affair. Exhausted but still enthused, towards the end of 1968 they began taping material for a second album in Decca’s LA studio. Work continued back in New York, and in December they released their second 45, Confusion / You And I. It wasn’t a hit, but sessions carried on into the New Year, their work-rate sharpened by rumours of Kapp’s impending collapse.

Having agreed on the title Contact, Kapp’s ad agency put Bryant in touch with Pan-Am, who jumped at the chance to have one of their planes featured on a hip album jacket. The duo duly posed in the cockpit of a passenger plane, with drug paraphernalia scattered about them for comic effect. For the rear sleeve they obtained a photo of a Swedish air crash, over which was superimposed a shot of Coxe and Taylor posing with banjos. The LP appeared in the late spring of 1969. Rawer and more despairing in tone than their debut, it still displayed a strong pop sensibility that could have spelt a commercial breakthrough if only the label had been better organised. As it was, Contact was barely shipped. Adding to their woes, when Pan-Am saw the sleeve they instantly sued - but it was futile. Kapp was almost broke as it was.

In July, New York mayor John Lindsay invited the duo to play in Central Park as Apollo 11 landed on the moon, an event covered by Rolling Stone, who described Simeon as ‘the leading exponent of hippy technology’. Such high profile coverage was of little use in the face of their label difficulties, though. A third album was recorded at NYC’s Record Plant (with encouragement from Jimi Hendrix), but another deal never materialised and debts meant that their equipment was impounded. Having composed and played live music for an avant-garde theatre production entitled Cockstrong, in the summer of 1970 Silver Apples split, too worn down by poverty to continue. In the mid-90s, however, learning with astonishment of the interest their music had generated in the intervening decades, Coxe and Taylor reunited for some rapturously-received shows and further recordings, as well as finally issuing their ‘lost’ third album as The Garden in 1998. Misfortune intervened again, however, when Coxe broke his neck in a car accident on the way back from a gig in 1999 (he has since largely recovered), and tragedy struck when Taylor suffered a fatal heart attack in New York in March 2005. Yet the music the duo made is certain to outlast them both, and many of their contemporaries’ too, standing as it does as the most radical fusion of electronics and rock and roll ever recorded