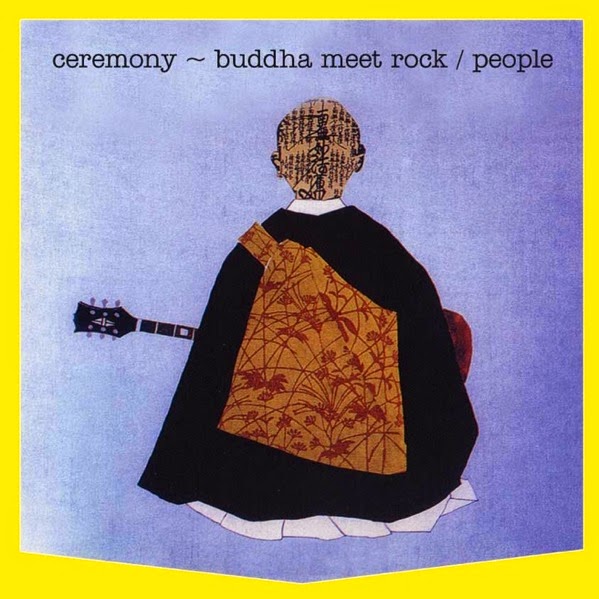 
Psychadelic rock from Japan. Vinyl release from 1971, from what I hear it's extremely hard to find, but has been reissued. This is the original vinyl rip.

Nobody’s sure if the muscians on this recording ever performed as a group or whether Ceremony was simply a studio super project. Certainly guitarist Kimio Mizutani had already enjoyed a certain amount of crticial exposure following stints with Love Live Life + One and Masahiko Satoh’s Sound Brakers and it is Satoh’s jazzy fuzz guitar licks that help to lift this album to a higher level. Unfortunately this was the ensemble’s only album, but the concept work, Ceremony – Buddha Meets Rock, is an absolute classic. As the title suggests, this 1971 recording was an attempt to fuse Buddhist-influenced spiritual vibe into an innovative oriental form form of hypnotic psychedelic prog rock. . All in all a rather weird record but the sound is mindblowing – experimental and trippy, but never too free or over the top, and at times a more traditional Japanese style of music lurks in the background. A monumental album that’s never going to go out of style.

There’s lots of nice fuzz guitar leads and overall, a very sanctified vibe that makes this a deep but groovy experience. Following this , Mizutani recorded his equally great solo album.

Quite a weird little record -- part psychedelia, but with some really rootsy elements -- and also some odd use of recorded music as well! The sound here is really mindblowing -- experimental and trippy, but never too free or over the top -- and the core instrumentation includes lots of fuzzy guitar, organ, and rough percussion -- plus additional vocals in parts, and even a bit of sitar as well! The production abstracts some of the sounds nicely, but never too much -- and at times a more traditional Japanese style of music lurks in the background, possibly as a brief nod to the Buddha in the title. Most unusually, though, is that the first track on the record features part of a David Axelrod album playing in the background! There's clearly an Axelrod influence going on -- both in the structure and sound of the record -- although the group also take things very much in their own direction too.".