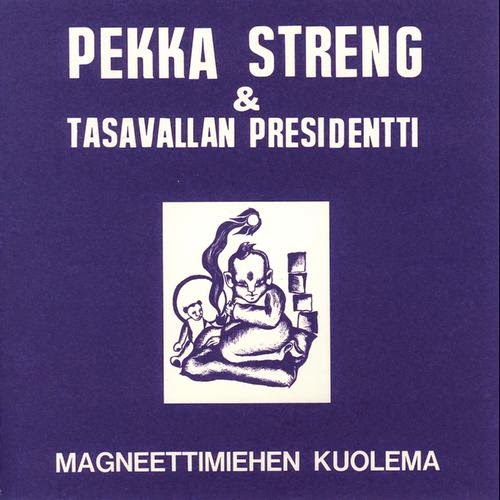 PEKKA STRENG (26.4.1948 - 11.4.1975) was both a mystic and a tragic character, being a pioneer of the small scene of Finnish psychedelic folk music. At late 1960’s he participated in activities of The University Student Theatre, and he also did some radio plays which made so good impression to the staff at YLE (Finnish Radio Broadcast co.), that he was recommended to Otto Donner, who invited Pekka to do recordings for the famous Love Records label. On these albums along with the help famous Finnish musicians Pekka sings and plays acoustic guitar, and also all of the songs and lyrics on these records are written by him.
His first record “Magneettimiehen Kuolema” (”The Death of A Magnet Man”, 1970) was done with the famous prog band TASAVALLAN PRESIDENTTI. This album holds themes of oriental philosophies and religions, and the most famous track on it is the song “Sisältäni Portin Löysin” (“I Found a Gate Within Myself”), which describes poetically the process of consciousness expansion, and it has also been performed by many other famous Finnish artists. There are also other interesting tunes on it, like euphoric “Gilgamesh”, “Olen Erilainen” (“I’m Different”) and “Pitkä Kieli” (“Long Tongue”).
The second album “Kesämaa” (”Summerland”, 1970) was done with another league of famous Finnish musicians featuring Olli Ahvenlahti, Eero Koivistoinen, Hasse Walli and Pekka Pöyry. The overall feeling of the records is a bit more warm-hearted and clearer than it’s more psychedelic predecessor, but it too has fine artistic and surreal elements in it. Also along with Pekka’s poems there are also some texts of other authors there, like TOVE JANSSON.
Sadly during his military service at 1967 Pekka had got a cancer, and the awareness of his dangerous illness surely affected his artistic career. He died at the age of 26 leaving behind only two finished albums and plans for the third album, which never got recorded. There was a memorial concert held for both Pekka and Matti Kurkinen (member of band KALEVALA who died at same year) at Kulttuuritalo, with performers like Jukka Tolonen, Rock’n’Roll Band, Albert Järvinen and KALEVALA.
Though Pekka was never an extremely popular artist, he has a strong cult status, his records have been selling in a constant flow, and there are some neat remastered CD’s of his albums on the markets. Though he had fans during his lifetime, he was never interested of publicity, and he gave only one interview, which was published posthumously. His position is definitely among the other 1970’s Finnish progressive artists like WIGWAM and TASAVALLAN PRESIDENNTI, though his Finnish sung works may not be as accessible to non-Finnish speaking audiences than to Finns.