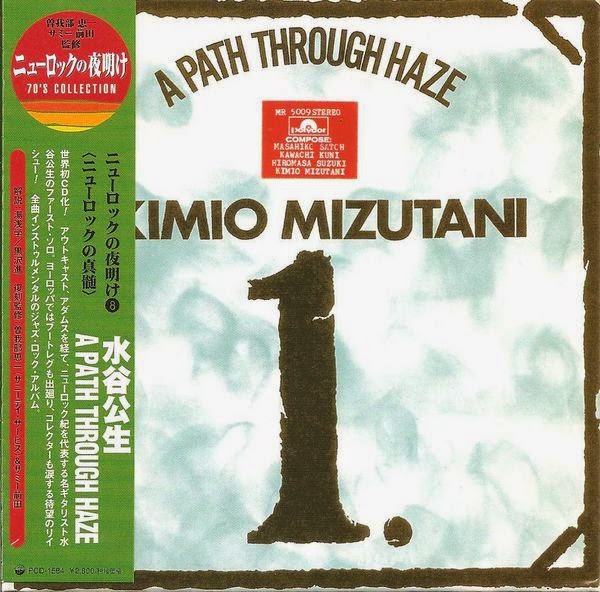 Kimio MIZUTANI was born in Japan on June 17th, 1947. He appeared on stage as a guitarist in his teenaged days and formed OUT CAST in 1966, which currently were considered as the Japanese Garage Punk progenitor. 1971 was the special year for him. He carried out two important progressive rock project - LOVE LIVE LIFE + ONE and PEOPLE - with his improvised guitar play and terrific sound production. And also as a solo player he released 'A Path Through Haze' in the same year.

He is very active as a session guitarist and sound creator but for over 30 years he had not released any album under his credit.  But at last in 2003 the project of Kimio and Hiro Yanagida named MA-YA produced an album 'Floating'.

Ultra-rare ‘70s Japanese rock album. Kimo Mizutani was the guitarist in the excellent Japanese Freak-out group, Love Live Life + 1 and this reissue is of his first solo album from 1971. Mizutani plays electric and “folk” guitar and leads a largish ensemble (bass, drums, organ, Moog and vocals) through what is widely regarded as one of the true psychedelic masterpeices of the ‘70s Japanese scene. Sensitive interludes (accompanied by the Toyama String Quartet and the Etoh Wood Quartet) , tasteful nods to progressive/fusionist extension and a lovely, hovering psych guitar from Mizutani dominate proceedings. A nice merger of hard rock concxeptualisation and the complexities that would evolve from it…and until now, almost impossible to hear within the confines of Western Society.

What if King Crimson or Soft Machine were founded in Japan in 1971? The first impression is about the big attention in the sounds choice.
The title track starts with a melodic keyboard that reminds to Wakeman's Six Wives, but it's only the first minute. Guitar and drums add an acid touch and the athmospheres are closer to Steve Hillage. the background "noise" makes it space rock. As first approach it's really not bad.

"Sail In The Sky" is where the connection with KC starts to appear. It's a long track with a spacey start that after 1 and half minute turns to soft psychedelia and later to a jazzy guitar solo.

"Turning Point" starts melodic and after the usual minute is again jazzy. Great guitar and electric piano. Short but impressive.

"Tell Me What You Saw" is pure progressive. ELP and KC seems to be the influences, so I could say "Greg Lake" instead. But keep in mind that this is original music. There may be influences, or this can be how my mind elaborates the listening experience trying to map it on something already known. This is a psychedelic track with a noisy central part. Noisy in the sense of free jazz. It seems to be chaotic but I don't think there's a lot of improvisation. It's a free jazz composition.

I don't know if "One for Janis" is dedicated to Janis Joplin. The acid guitar sound can remind to her live performances with Big Brother and the Holding Company. It's an acid blues piece, very enjoyable. In the scond part, keyboards make it more acid with background sounds, but it remains bluesy until the end.

"Sabbath Days Sable" is a slow track with a melodic piano base that guitar and strings (keyboard maybe) make non.trivial by adding few dissonances. Soft Machine can be a reference.

"A bottle of Codeine" is driven by the bass line. it's another acid blues track. It's a slow 7 minutes trip with an excellent guitar solo.