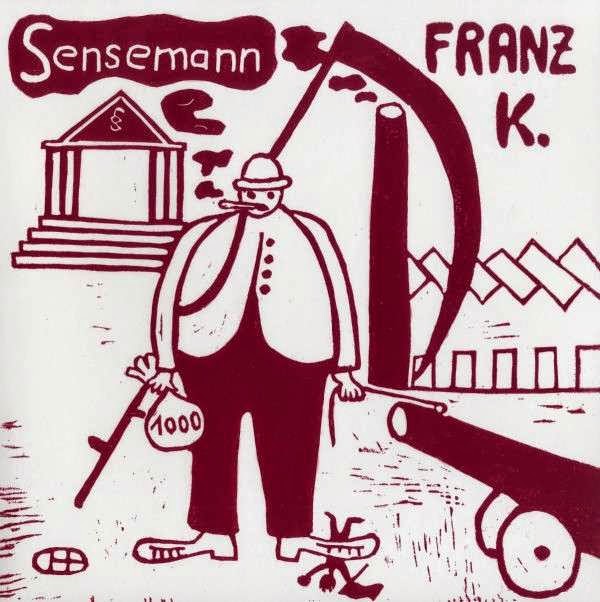 Sensemann is the first album by the German band Franz K.. The band plays in a guitar-bass-drums trio set-up. Formed in Witten in 1969 as Franz Kafka, in their early days they were one of those very Teutonic underground rock bands, akin to Ton Steine Scherben or Lokomotive Kreuzberg, with a hard-edged agit-rock style.
Their strong anti-capitalist lyrics more or less place them in the German polit-rock scene. By the time of their debut (becoming just Franz K.) they had matured their sound from the early days of Fugs and Mothers style theatre in German. SENSEMANN featured just two side-long tracks offering a great deal of freedom for invention, with aggressive German lyrics and similarly angular freaky guitars characterising their sound.

The first track is mostly bluesy rock with some jazzy elements. The music is played in an energetic way and has this great Rolling Stones "Midnight Rambler" vibe. The second track is quite a monster. Within one minute you go from The Guess Who-type rock to "21th Century Schizoid Man" mayhem. After a few minutes the sky has cleared and an almost Black Sabbath-ian grunge riff sets in. There are a few guitar lines vaguely recalling the German band Vita Nova. Next, a razor-edged guitar assault pops up which reminds me of Guru Guru, T2 and Black Sabbath all at the same time. After some eight to nine minutes a pedestrian beat announces the arrival of the vocals. The vocals are less in your face and more symbolic this time. The last part of the track is more jamming and repetitive, but still quite cool.

A psychedelic hard-rock twist on Ton Steine Scherben perhaps. Franz K. continued for many years, ROCK IN DEUTSCH is also reputedly good, but on later albums (at least another nine!) the vocals took over and they moved to a more mainstream rock and cabaret mixture, totally lacking the innovation of their debut.