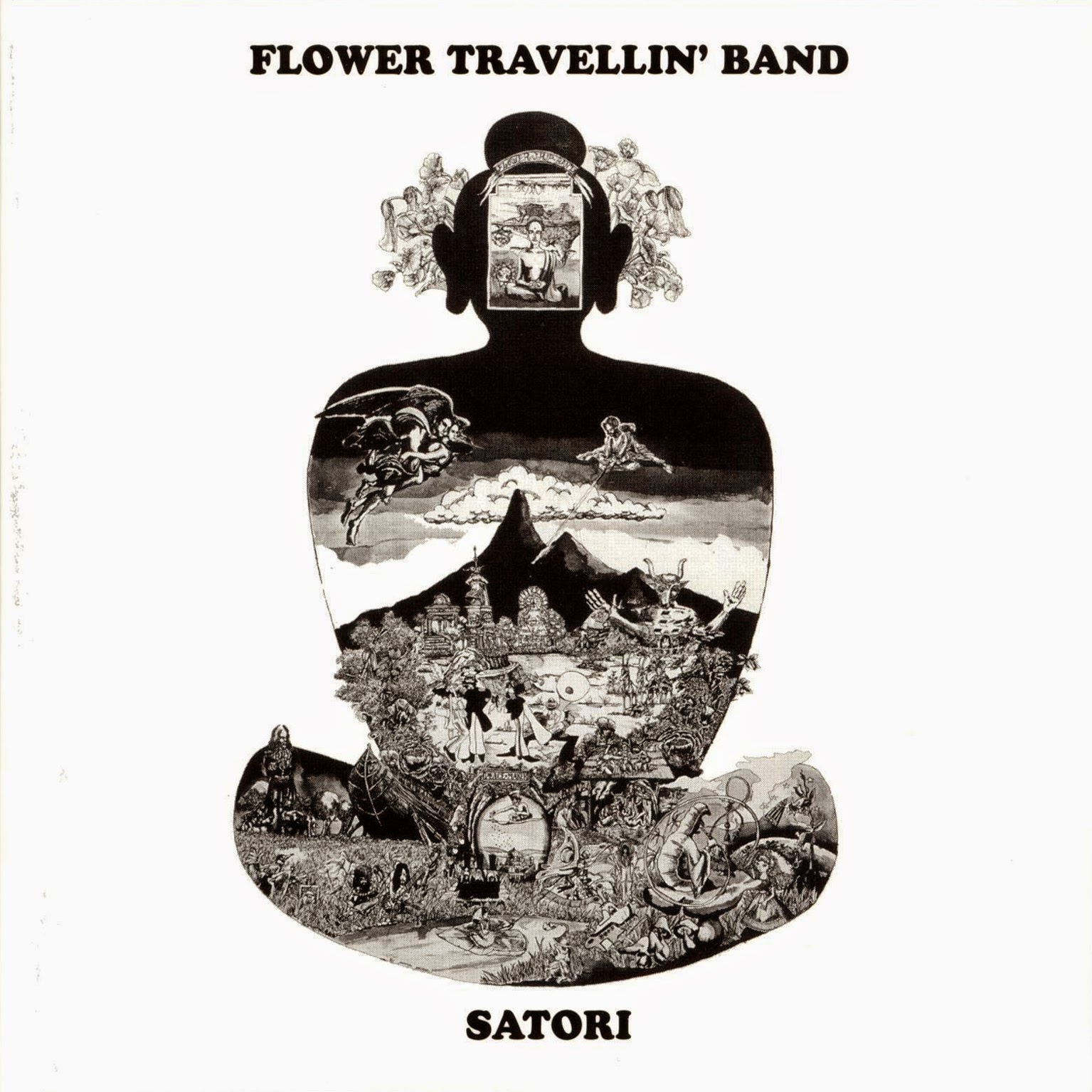 If you only ever hear one Flower Travellin Band album in you life, you'd be best advised to make it Satori, because this is the bands definitive vision. The entire album is one five part Doom Metal (Flower Travellin Band, along with Black Sabbath, and Pentagram invented the genre, in my opinion) song that just kills. It is nothing less than Joe Yamanaka and Hideki Ishima's Masterpiece.

Flower Travellin’ Band saw the light of day originaly as “Flowers” in 1968,a side-project of Yuya Uchida(whose role in the development of Japanese rock is covered in great depth by Julian Cope,in his book “Japrocksampler”) which featured various Group Sound musicians, trying to give a local answer to the likes of Cream and Hendrix. Fortunately, this didn’t last very long and after a line-up change, TFB morphed into the classic formula of Joe Yamanaka (Vo), Hideki Ishima (G), Jun Kobayashi (B) and Joji Wada (D) for 1970’s “Anywhere”,featuring the first known cover of Black Sabbath song and a by now,legendary cover. It wouldn take another full year until their next album, “Satori” (Enlightenment), and with it, one of the best albums that the 70’s gave us and probably the one that managed to put Japan on the music map, for good.

Satori Part I is one of the best album openers I’ve ever heard, beginning with a few seconds of screech, followed by a few discrete cymbals, creating a tense moment of anticipation shattered by Yamanaka’s banshee-like howl and by some slow yet heavy riffing,that turns very naturally into an overwhelming delight of energic proto-metal featuring twists of stoner rock and an undeniable hint of doom metal, with wonderful solos galore. On a more metaphorical level, it’s as if the listener’s is an ancient soldier on his way to the battlefield and by the time Joe’s vocals get in, the battle commences, an adrenaline rush kicks and you sword your way out of it, in total war.

Satori Part II is something else, not as energic as Part I, but this is the first track where Ishima’s psychedelic guitar solos take center stage, mixed with an undeniable Japanese traditional influence, blending very well with Wada’s repetitive drumming, Kobayashi’s bouncy bass and Joe’s sporadic vocals. The band released this as a single in Canada and it managed to reach number 8 in the local charts, in what must have been a surprise even for the band itself, even thought it was a deserved reward of their work.

Satori Part III uses the same recipe as the opener with a slow, bass-driven beginning before getting into Satori’s characteristical lush and intense guitar riffage and an added transcendental trance-like feeling to boot. By now,it should have become clear that this album isn’t exactly standard hard rock, but a mixing of everything that was going on the heavier side of things in the Western Hemisphere (Blue Cheer, Sabbath and Can come quickly to mind), added to the band’s Japanese heritage and turned up to 11, evolving into something that is the sum of it’s influences but unique, very hard to replicate and even harder to describe.

Satori Part IV is the continuation of our previous revelation and comes with incredible confidence and a surprising simplicity in comparison to what was going on before. The bluesier first four minutes are given a special treat,being followed by some spot on harmonica playing accompanied by a nice rhythm section, before Ishima unleashes his inner soloing demon and comes to the rescue in a great intertwining that last just until the last two minutes when Joe’s vocals signal a comeback to the beginning of the song.

The last part of this eponymous adventure, Satori Part V, seems to know too it’s the album closer and opens with a speedy section downplayed by Joe Yamanaka’s wailing, managing to express great angst and pain,afterwards going back to it’s psychedelic and meditative ways, Ishima sounding more Japanese than ever, doing what Joe did earlier, but with the help of his trusty fuzz-driven instrument in the same melodic way as he always did. It seems that the battle is now over and the sight of the blood filled battleground is too much to take, giving up to bereavement that in the end transforms itself to a “show must go on” feeling and swiftly ends.

As I said before, Satori is one of those albums that is hard to describe in a normal, song-by-song way, because of it’s cohesive nature and it’s unique sound.Instead, it should be listened in its entirety, for as the title says, it acts as an enlightening element to a new world, albeit from a very acid driven viewpoint. The entire band shines throughout the album, with extra points to Hideki Ishima’s guitar antics,as well as his writting credits and Joe’s explosive nature, pretty easy to see as well, since the man used to have huge pink elephant as a stage prop and sported an afro.

All in all, this is an essential listen for anyone that’s into the heavier and hazier side of things or if you’re just looking for a great album to stray out of your normal listening patterns. I’m sure it won’t leave a bad impression and turn your attention a bit to what the Land Of The Rising Sun has to offer.