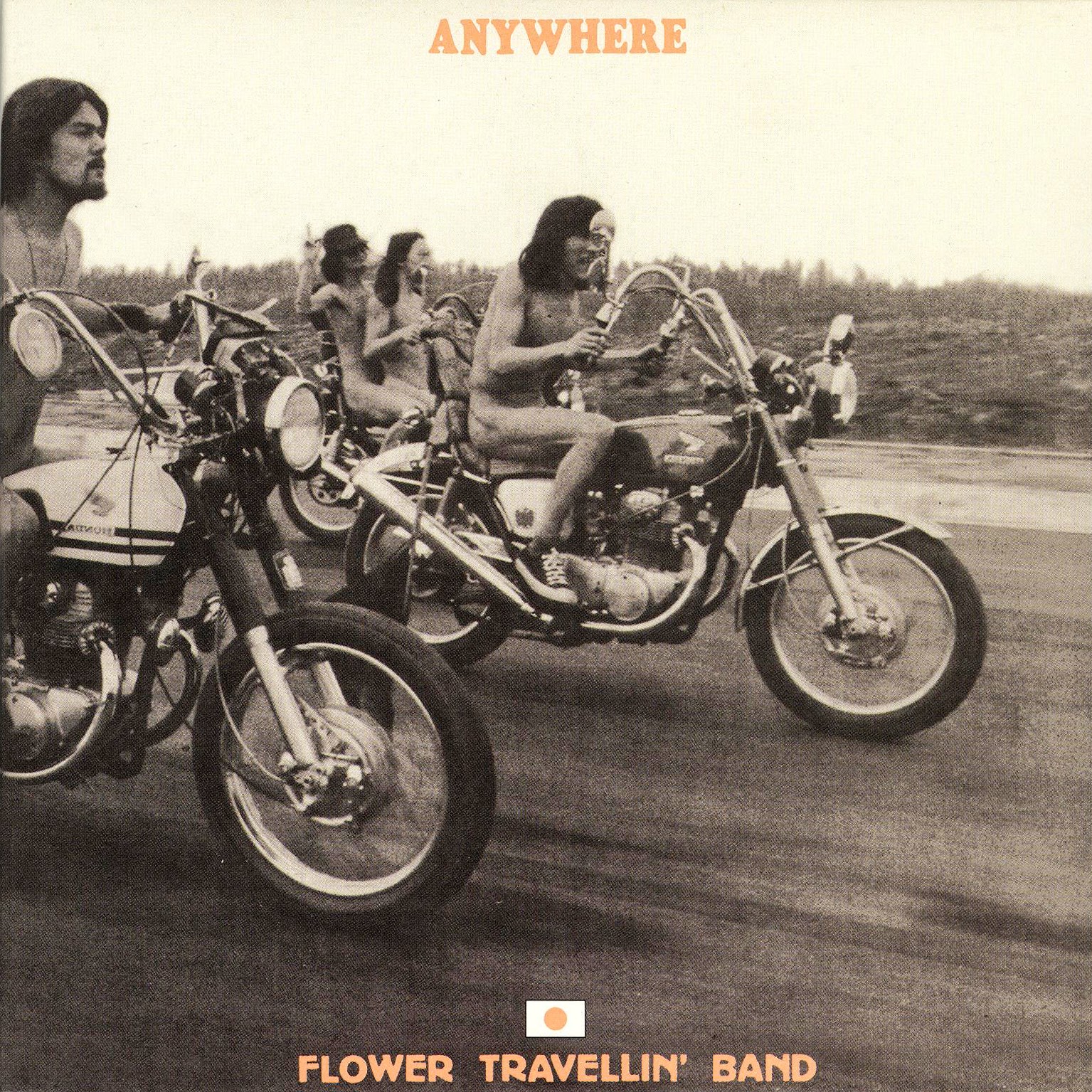 Formed in 1967, this japanse proggy-doom heavy rockin' band started their career with 60's West coast acid rock covers under the name Yuya Uchida & The Flowers ("Challenge", 1969). With "Anywhere" (1970 they were in search of their own sound and musical identity, surfing on 70's California rock and on the stoned heavy rock of the Sabbath. Satori (1971) remains their ultimate masterpiece, delivering a really captivating, personal psych-hard rockin' trip with discreet Eastern mystical influences. After this mesmerising stoner rock essay the band released a last album "Make up" (1973). Flower Travellin' Band is definitely a 70's cult psychedelic / space rock standard and a strong reference on the Japaneses underground scene with other psych-proto-metallers as Brush!? and Les Rallizes Denudes.

Although an album consisting mainly of cover versions, Anywhere still exhibited many of the musical traits that were to come to the fore on the band’s next release, the classic Satori, an album of original material delivered with panache by the increasingly confident Uchida.

An album made memorable by its risque cover as well as its ground-breaking approach to Western rock musicSelling points:

The band was initially organized by Japanese entertainer and entrepreneur Yuya Uchida as "The Flowers," a cover band, and featured two vocalists - male vocalist Yuya Uchida, and female vocalist Mari Kaneko, who was touted as the Japanese version of Janis Joplin. Their first album consisted of covers of Western pop songs. It was primarily notable for the fact that all of the band members appeared nude on the cover, including Aso, which was considered scandalous at the time.

However, after the "Flowers" album, Uchida lost interest and Aso drifted away. The remaining members reorganized themselves, acquiring Joe Yamanaka as a vocalist on the recommendation of Uchida, and proceeded to explore a more original and rock-oriented direction.

In early 1973, they were billed to open for the Rolling Stones, but Mick Jagger's visa was rejected from a previous drug conviction and all concerts were cancelled. Later that year the band broke up, with Yamanaka going on to release various solo albums.

Guitarist Hideki Ishima released a solo album, One Day, in 1973, and continued a career as a studio musician, guesting on several of Yamanaka's solo albums. Ishima is still active in the music scene in Japan, and specializes in playing the "sitarla," an instrument he designed. The sitarla apparently combines the qualities of a solidbody electric guitar and the sitar.

In recent years, Flower Travellin' Band has been rediscovered by the heavy metal, stoner rock and doom rock movements in America and England, and are often cited as influential by bands involved in these movements.

Yamanaka continues to be popular in Japan as a solo artist, and celebrated his 60th birthday in 2006 with a tour and the release of a live DVD, Joe's Bag. He continues to perform Flower Travellin' Band songs as part of his live show.

Uchida and Aso had left the group by this point, and they reorganized themselves as Flower Travellin' Band. The album consists of five lengthy cover songs (including the first known Black Sabbath cover, namely the song "Black Sabbath"), which are radically reimagined from the originals, with extended guitar soloing and quite different arrangements from the originals. Critically praised, particularly for the drastic reworkings of Muddy Waters' "Louisiana Blues" and the traditional "House of the Rising Sun," both of which are well-nigh unrecognizable. Once more the album cover courted controversy in Japan, featuring the four members of the band riding down the road stark naked on Honda motorcycles. The band was signed to Atlantic Records in Japan on the basis of these songs. Interestingly, the album apparently charted briefly in Canada.