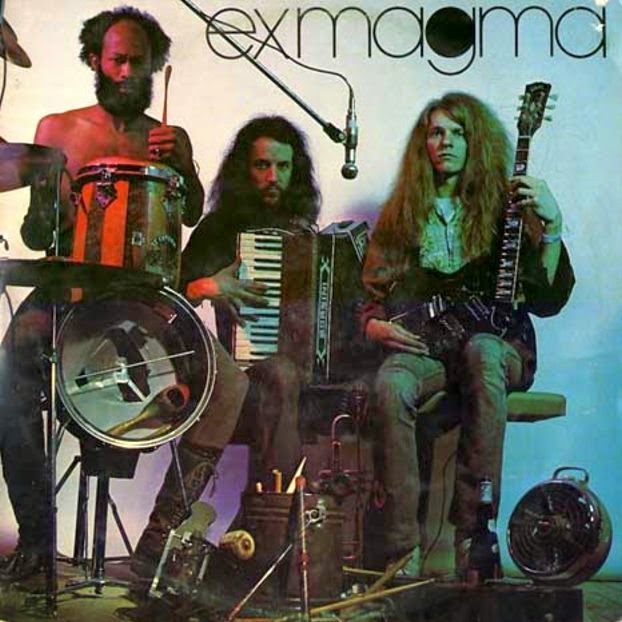 The EXMAGMA LPs usually get filed under Krautrock, but there's nothing typically German in the way they develop their freeform experiments, that turn out to be well structured on the third hearing. No AMON DÜÜL freakouts, no metric rhythms à la CAN, and two albums that - though mostly instrumental - sound totally different. They've been often described as Jazz Rock, Fusion, or even Electronic Avant-Garde, but none of these pigeonholes could ever do them justice. Bored with YES, GENESIS, SUPERTRAMP and all the crap they nowadays try to sell you under "Symphonic-Prog", they dropped some acid and set sail for new shores, weaponed only with sticks, strings and keys.

The two German members of the group were Thomas BALLUFF from MULI & THE MISFITS (a '60s Mod-Soul band that depended on his Hammond B-3 grooves rather than on brass) and guitar and bass player Andy GOLDNER, who came from FIVE FOLD SHADE, Stuttgart's premier R&B band in the PRETTY THINGS / YARDBIRDS category. Fred BRACEFUL, the late drummer, was born in Detroit and came to Germany with the US Army in the late '50s. He was a well-paid free-lancer in the early '60s, but never quite your standard jazz drummer who'd be content to build the backbone of a rhythm section. With like-minded keyboarder Wolgang DAUNER, he formed ET CETERA in 1970, a group that released one of the few real necessary and satisfying albums of a genre that we now know as Krautrock. (Back then we didn't call it Kraut, and Rock without Roll is a four letter word anyway.) When DAUNER started flirting with the eight letter word (jazzrock, dummy!), BRACEFUL joined MAGMA, the band that changed to EXMAGMA after finding out about the French outfit of the same name. (The fact that EXMAGMA's second LP was only released in France caused a lot of "who's who" guessing among collectors, especially as the French MAGMA sound a lot more Teutonic than EXMAGMA.)

Right on, what about the music? The eponymous first LP, recorded in 72, reminds me a lot of the late '60s SOFT MACHINE, taking a direction that probably wouldn't have caused Robert WYATT to quit. There's no sign of bombastic or pathetic ingredients, which makes comparisons with PINK FLOYD misleading (unless you saw them after "Ummagumma" but before "Atom Heart Mother"). One side live, one side studio, EXMAGMA are pouring it all out and leave it up to you. Recommended to open minded explorers or acid eaters. Budweisers won't do the trick.
In early '73 EXMAGMA toured France, where their sound experiments were well received (though they always devided an audience to pro and contra factions) and stayed there for about two years. "Goldball" was recorded in Conny PLANK's sudio near Cologne, but only released on the tiny French label Urus.

While the debut was floating like a raft on sometimes stormy sea, this one grooves like HENDRIX jamming with Miles DAVIS, teaching each other "Dolly Dagger" and "Bitches Brew". (If you've ever heard Miles DAVIS play the organ instead of the trumpet, you'll know what I mean.) The second LP definitely is the more accessible record, but still a well deserved shock to those who associate groove with jazzrock. The spirit is Rock'n'Roll, the approach is improvisation. If you expect fusion, prepare for confusion. It's the kind of record that makes me curse myself for not arranging my collection alphabetically, I don't know where to put it thematically.
Even harder times are ahead: I received a promo copy of a third, previously unreleased EXMAGMA LP recorded in 1975.

It's yet another bundle of joy with lots of good vocals and weird as they are, songs that sometimes rock like hell. This, their most aggressive and mature epic, stayed in the can because their record company insisted on stripping the double album concept to a single LP. The band refused back then, but the two remaining members found a keen little company (sic!) 26 years later and "Exmagma3" will be out on Daily Records in the near future. Till then, have a whiff of their drug rock fusion, if you dare. If you need a taster, go to the CD compilation of German underground bands, "Obscured By Krauts".


With two young veterans from Germany's R'n'B scene who happened to be talented musicians and an extraordinary African American drummer who seemed to have the swing right there under his skins and all over his muscles and bones, it is no wonder that Exmagma came to be one of the greatest acts in the jazzy trend of krautrock. All it needed was a proper cohesion that could bring together Braceful's infinite dynamics, Balluff's avant-garde sensible creativity and Goldner's vigor and refinement for Exmagma to fulfill its inherent promise. and boy, did they achieve it dearly!! The 1973 eponymous debut album is an outstanding example of experimental jazz-rock with a high degree of psychedelic heat and a lucid progressive-oriented awareness. Funny how the band's name makes a straight allusion to the trio's resignation of its original name - this sort of humor that is evident in the album covers is also present in the music itself, among the obvious cleverness provided on the articulated jams, improvisational moves and strategic variations. 'The First Tune' is the first tune in the album, although more exactly it is a conglomerated series of various tunes. With a basis of organ, bass and drum kit, the band first indulges on a slow-tempo 3 minute jam full of psychedelic vibe; the second section is a brief interlude that states a denser aura, featuring distorted clavinet and a more distorted bass guitar (pretty much like Soft Machine at its noisiest), while the drummer brings complex adornments to his steady funky rhythm pace; the third and last section turns down the density a bit while retaining the power and the funk-oriented foundation. 'Tönjés Dream Interruption' further enhances the SM connection ("Third" and "Fourh" eras) in a very robust fashion, while 'Interessante Olé' travels to the North American territory of free jazz, featuring sustained flows on organ and bass conveniently supported by Braceful's precise swing and soaring rolls. Too bad that the fade-out arrives so soon!... Anyway, 'Two Times' follows with its 2-part sequence: the first one is very soul-oriented, led by the bass guitar's pounding line, while the second one shifts to an extroverted jazz-rock climax. Again, the "too early fade-out" syndrome settles in to destroy the hope of an expanded jam of epic proportions, but well, that's OK I guess. The album's second half is occupied by the gigantic piece 'Trippin With Birds / Kudu / Horny', a convincing manifesto of Exmagma's pretentious of explosive experimental jazz-rock. The artistic goal encompassed in this 19- minute musical journey is so challenging that it really has to be a crowning moment in the history of krautrock, rivalling with the quintaessential weirdness of Faust, the exquisite dynamics of Agitation Free or the Dadaist spirit of Amon Düül II. Rivalling with the commonly acknowledged greatest, I mean. The 'Trippin' with Birds'section is a deconstructive full of electrifying tension and surreal landscapes that include ultra- spacey organ effects, tortured sax improvisations and calibrated dramatic percussive interventions. The 'Kudu' section enters a gradual transition to a jazz-rock jam partially structured under a "free form" guise, plus some extra Hendrixian ingredients (on organ, not guitar). In moments like this I can feel a close relatedness between Exmagma and other jazz-krautrock heroes such as Embryo and Dzyan. Finally, the 'Horny' section finds Goldner switching to guitar, somehow emulating Guru Guru while the whole ensemble aims at a moment of solid dispersion. Well, then the fade-out arrives too soon to let us enjoy a prolonged elaboration of this motif, but by now the attentive listener is convinced that this monster track is the perfect closure for this spectacularly abrasive gem of krautrock.