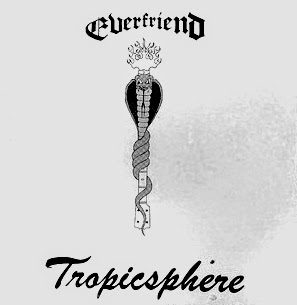 The American progressive rock band Everfriend were the project of keyboardist Bill Rhodes (real last name Rupprecht), who was active in the 1970s-80s. The music generated was an eclectic mixture of styles, from space rock to classically influenced keyboard works. The Mellotron dominated the sound as well as a blend of symphonic prog with synth-fronted jazz-fusion. The band consisted of three artists: Bill Rhodes on keyboards, Mike Jacoby on drums, and Paul Kozub on bass. They produced some underground very obscure albums including "Tropicsphere" in 1980, "Sphere of Influence" in 1981, and "Snake With a Hat". Bill Rhodes and Mike Jacoby used to play together in the All Night Flyers band and worked on the Everfriend project which was their focus while they lived in the Metuchen New Jersey area. They picked up bassist Paul Kozub for the albums who also played in the All Night Flyers. The band underwent personnel changes over its short career spanning 1978-1981, and the album "Sphere of Influence" is hailed as a prog classic, albeit one of the most obscure acts in the United States.

Extremely obscure US group from the New Jersey area, active from late-70's to early-80's.Everfriend were led by keyboardist Bill Rhodes and drummer Mike Jacoby, both them previously played together in a band called All Night Flyers.Their debut album ''Tropicsphere'' was released in 1980 on the unknown Jazzical label.

A quite uneven album, ''Tropicsphere'' opens with a few cuts, where keyboard-driven Prog/Fusion meets commercial Horn Rock.Rhodes' work on electric piano and synthesizers comes in evidence with some really furious solos, the tracks have some complex themes and sudden changes, the sporadic female vocals are cool, but the slight air of mainstream vibes is evident throughout them.There is a notable STARDRIVE influence in most of these pieces.Side A suprisingly closes with a very symphonic-oriented piece, similar to HAPPY THE MAN, French HECENIA or even E.L.P. with a very technical keyboard delivery and fantastic bombastic breaks, despite the mediocre production.The flipside of the LP is certainly more consistent and propably a bit better than the opening one with a pronounced Classical flavor mixed nicely with jazzier interludes.While it opens in a typical Prog/Fusion realm, the rest of it shows Rhodes heavily armoured with organs, harpsichord and piano, producing very good Symphonic/Fusion along the lines of HAPPY THE MAN and E.L.P., full of intricate keyboard fanfares, double synth/organ attacks and complicated textures.One track is even led by his delicate harsichord work in a full-blown Classical mood and the amateur-sounding but rather limited horns is the only negative point of his whole effort.

Among the decent Progressive Rock oddities, ''Tropicsphere'' deserves some attention by all fans of keyboard-driven Progressive Rock because of Rhodes' tanted playing and his nice bunch of composing ideas.Recommended, although very rare.