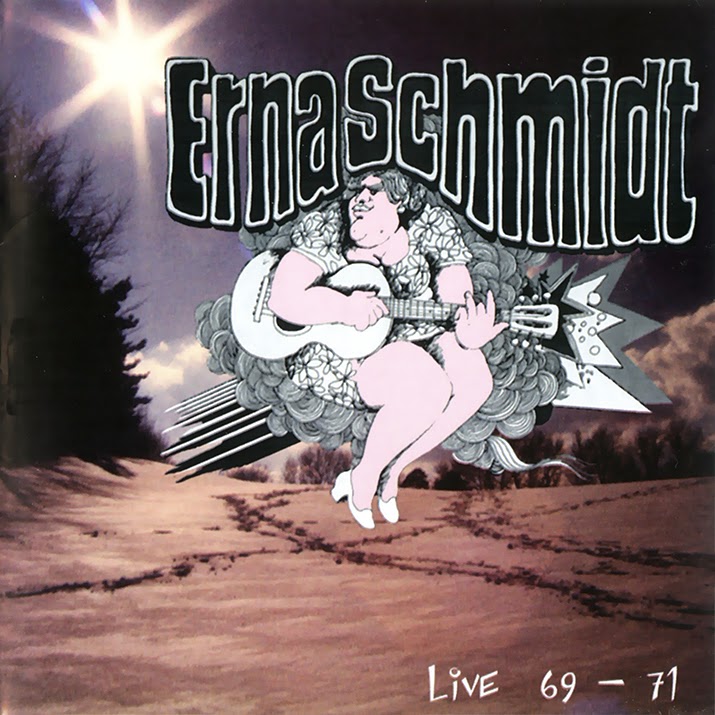 In the early 60s a band named R & B CORPORATION was founded near Stuttgart which was playing conventional beat music with Wolfgang Mathias at the drums. Hubert Stütz (guitar) joined in 1965 and brought up some new blues rock elements. Further on the band crossed the frontiers to improvised music oriented at Jimi Hendrix, bands like Cream or Ten Years After and soon they became known in southern Germany. Walter Laible (bass) joined in 1967 and they played as the support for Rory Gallagher, Brian Auger, Procul Harum, Alexis Korner and others.

According to the upcoming krautrock movement they started to write their own music/lyrics and decided to change the band name. In a proper sense the story of ERNA SCHMIDT was now opened in 1969. The band continuously enlarged with Rolf Schiegl as the second drummer, Sam Drake (flute, piano), hammond player Romi Schickle, also known as a member of PROF. WOLFFF, Peter Mayer (vibraphone) and a brass section.

They gigged all over Germany and could also be seen on stage at the legendary Quartier Latin in Berlin. Known for incredibly long improvisations, usually being stoned on the stage and jamming all the way, often together with guest musicians, they developed to a very popular live band in the meanwhile.

The next change occured when Schiegl and Drake left the band at the end of the year but Hartmut Mau came in as a substitute who played several wind instruments and was part of a circle around bass player Helmut Hattler, a founding member of KRAAN. Now as a quartet they had a widespreaded repertoire of selfcomposed songs consisting of improvisations and provided with variations on every gig. Due to a friend of drummer Mathias 20 hours of recordings of that time survived which were remastered by Mick Baumeister in his studio. The band decided to publish only some excerpts which are having an excellent sound quality.

The album 'Live '69 -'71' was finally released by the Garden Of Delights label in 2000 with a 32-page colour booklet. The songs are sought out very well showing the band on a high musical/technical level and avoiding endless noodling. Stütz's various guitar playing alternating between psychedelic, heavy and jazz rock is remarkable and combined with Mau's flute the songs sometimes are close to Jethro Tull.

The first TV appearance came in spring 1971 and some professional studio recordings followed for example at the wellknown studios of SWF Baden-Baden. Due to the Count of Metternich, who gave the possibility to live in his country mansion at Wintrup, the band changed the domicile to the northwest of Germany. Rolf-Ulrich Kaiser of the Ohr label offered ERNA SCHMIDT a recording contract - but it was never put into action. Probably the main reason was that Hartmut Mau didn't want to become a professional musician. He left the band. Other flute players were auditioned but nobody met the band's expectations.

MISSUS BEASTLY's Jürgen Benz tried to help but gradually doubts about the musical concept began to increase. And when the band was searching for a new bass player because Walter Laible left, Helmut Hattler decided to come with his friends. But the collaboration failed. Whereas KRAAN arised at Wintrup the disbandment of ERNA SCHMIDT couldn't be stopped anymore until they finally gave up in the springtime of 1972.

The completely instrumental songs are from 1970 in the majority - representing a more conventional line-up with bass, drums, guitar and flute/saxophone - progressive rock with folk, psych and jazz elements. Despite they have been a very demanded live band, known for endless improvisations, the selected recordings are compact (only one song nearly reaches the ten minute mark), well-composed and presenting them on a high level. The style is not very unique on the other hand, influenced by wellknown bands and artists in fact but also combined with meditative jamming parts. The excellent groover Woischwiemoin for example remembers me at Jimi Hendrix's Band Of Gypsys and is one of the songs faded out after some minutes.

Erna Schmidt as the band song per se contains a great part by bass player Laibel sometimes playing like John Wetton in his early years - a powerful and haunting track. Pass - Weites Luftmeer folksy/jazzy Tull drenched with great flute work, La Folie D' Espagne in a more classical Focus mood and the psychedelic Rulaman are showing other facets of the band. It only remains for me to add that Hubert Stütz (also named Stytz) is heading the recordings with his excellent varied guitar contributions stylistically oriented at Jimi Hendrix in parts.

Hopefully there are also recordings existing from ERNA SCHMIDT's earlier respectively more experimental phase and the former members decide to publish the rest of the recorded stuff sometime. Nevertheless this album, released by the Garden Of Delights label in 2000, is a very good document of their musical abilities and I recommend to check it out