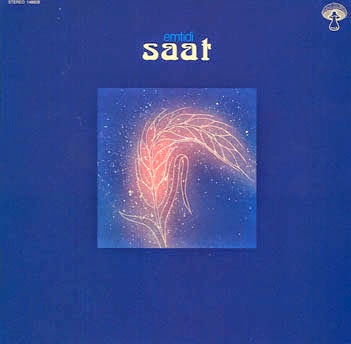 
The album "Saat" has some vintage synths along with the basic folk instruments unlike it's predecessor, and there are two longer suites here too, so Emtidi has evolved to a more impressionistic and interesting direction with this release in my opinon.

Some parts of the opening song "Walkin' in the Park" are very pretty, like the melody at the start, but the verse is somehow naive. There's also a bluesy jazz run at the end, but there isn't a very strong groove present, as there are no full drum set included in the band. The guitar solo isn't very wonderful too, and the song fades out during it. However, the moods get much better direction then with "Träume" (Dream), which is a very beautiful, quiet and ethereal aural landscape for syhths and voices. Sadly it is quite short one, unlike the next nearly 12 minutes long "Touch the Sun". It opens with long waves of electronic sounds, which are later joined by crystal-like notes and gentle weeps from guitar and vocal. This is quite minimalist solution, but very beautiful and works pleasantly. After five minutes the acoustic guitar opens the folk composition phase with charming and strong melodies, and there is also the fabulous Mellotron audible behind some parts. The keyboard driven part in the middle of the conventional folk part introduces some avantgardistic elements to this composition, which weren't most optimal here for my own listening experience. The also song opens and closes with some quick sounds of birds, creating an illusion of physical space to the tune.

"Love Time Rain" is a just short conventional folk track, resembling the song of their first album, but the title tune "Saat" (Planting) is much, much better. It opens with some nice quiet chord runs on the acoustic guitar, where both female and male vocals soon are joined. Though this is also quite common psych folk song, the charming melodies and coherent performing makes this a nice tune, actually one of the the best one of the album concerning overall quality. Even the other tracks are good and more experimental, there are some solutions and details in them which I did not like so much, but after listening the record during the years, I have grewn to like this album quite much. There are some classical progressions from Spanish-styled music also to be heard here.

The epic "Die Reise" (The Voyage) lasting ten minutes, opens again with ethereal keyboards. Soon a brisk acoustic guitar starts to drive the song forward, and this progression is lead by a male voice singing the lyrics in German language. There are also some supporting form minimal keyboards and female voices. Sadly this tune did not totally achieve the potential it has in my opinion. After three minutes the voyage leads to a church organ sounding keyboard universe, where ancient electronics paint some aural patterns. Near the end there is yet much better sounding stuff, where a flute does solo over quiet synth chords. The epic closes for final emerging of the beginnings theme repetition.

I first wasn't totally charmed by this album, but often love grows with time, and I have learned to like it and accepting some elements which weren't so attractive to me first. I also think it is more interesting album than the band's first LP. Fans of psychedelic folk and German 70's underground should check this out certainly.