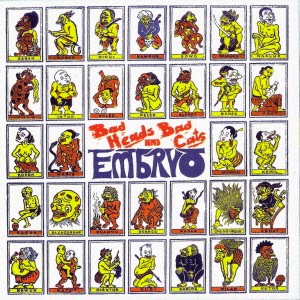 This one turns into a very jazzy direction, however some experimental creepy approach is still there. In the 70's I saw Embryo live several times - each time it was surprising, amazing, turned into a differnt direction musically. Even some studio albums can catch this terrific live atmosphere. 'Bad Heads And Bad Cats' counts among them in my opinion. 'Nina Kupenda' and 'Klondyke Netti' are the highlights. A funky bass - keyboards sometimes similar to Wheater Report - the great Charlie Mariano on sax and flute.

The digital Disconforme re-release adds one extended bonus track Human Contact which absolutely enriches this album. A very surprising song - it looks like this jam was recorded during the same sessions, but rejected for the album release finally because of the restricted vinyl length, I assume. Yes - I'm quite sure because the end of the song is corresponding to Tag X fitting much better here by the way. The EMBRYO's are acting which much joy of playing here - stimulating each other, far away from aimless noodling - open-minded jazz rock stuff. The Garden Of Delights label has issued a new version in 2012 which showcases another bonus track, recorded live at 'Umsonst & Draußen' festival 1975 in Germany.