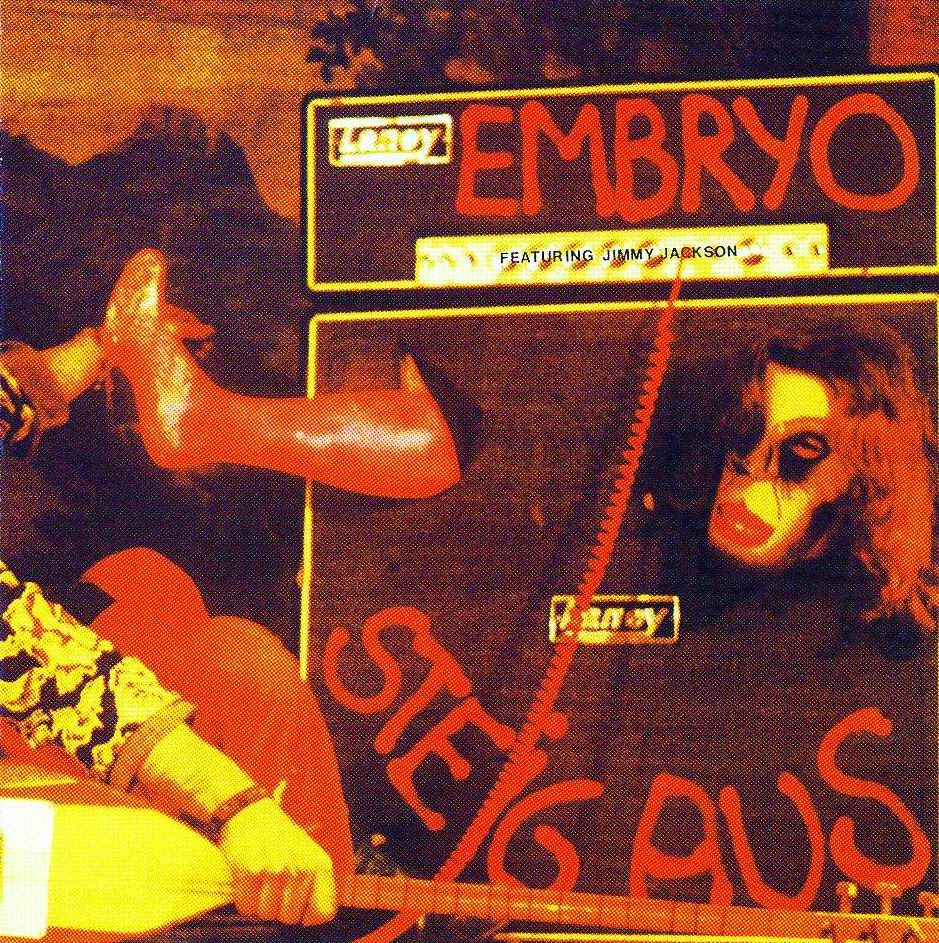 
Embryo is, basically, the project of drummer/percussionist Christian Bruchard joining forces with whoever happens to be in the ensemble at the moment. Embryo's golden moments come from the time in which his Lieutenant Edgar Hoffmann (sax and violin) shared center sot. "Steig Aus" is the band's fourth effort, and definitely one of their masterworks: you can clearly tell that the band is well rooted in its fusion-rock leanings, and that means that the psychedelic factor has only become an adorning ingredient after being half part of the band's nuclear sound for the first two albums. The band's sound is harsh and mysterious, in a way related to the rough approach pursed by many krautrock bands, but that's where the similarities with the peculiar German psychedelic prog movement ends. The swing of American-inspired jazz-rock and the vibe of standardiez funky bear a heavy presence as catalyzers of the various exotic sources that the compositions take inspiration from. The jamming is continuous and the display of energy is ver ysolid, in both the explicit and introvertive passages of the repertoire. 'Radio Marrakesch' kicks off the album with Northern African sounds of tuned percussions and hand drums, joined by guitar effects emultating Moorish woodwinds. Soon the keyboard and percussion input from the band itself appears and builds up the starting point for the main jam, a powerful funky-meets-R'n'B section in which the Hammond organ and the mellotron occupy a leading role while the rhythm section keeps a catchy cadence. With the solos on electric piano and guitar, teh jazz thing enters to add sophistication to the frenzy. This effective opener really sounds very East Coast, there is basically little Teutonic in it, and that's okay since it works well. After this excellent exercise on acid tripping on funky terrain, 'Draming Girls' changes things quite a bit. A very ethereal relaxing track, it features magical violin lines that go floating in the air in a very evocative fashion. The appearance of the married vibraphone and electric piano and the occasional flute mellotron also helps to create this track's particular mood. It sort of mixes the influences from early Weather Report and "Ummagumma"-era Pink Floyd: the latter is evoked by the surreal melancholy that fills every fibre of the track. The last track 'Call' occupies the las t17 minutes of the album. The succession of all diverse cadences emerging from bruchard's drumming (ranging from the tribal to the bluesy and from the fusionesque to the rocker) marks the continuum across all sections. Despite tha fact tha Bruchard serves as a leader, the ensemble makes 'Call' work as a genuine group effort from start to finish. The organ violin and electric piano solos, the absorbing mellotron layers that appear in places, the additional percussions,... all these elements conform a sonic forest that expands itself restlessly in total enthusiasm. The series of the last two sections, 'Clouds' and 'Call (Part 2)', build an impressive climax, exploiting the overall groove to its maximum level. "Steig Aus" is a must for every prog collector with strong jazzy sensibilities. Embryo is a musical world on its own, creating its own voice within the "rules" of jazz- fusion.