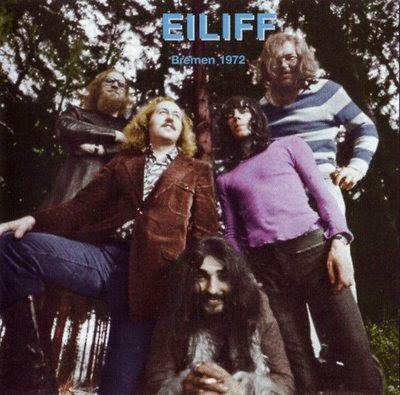 
Recorded after their last studio album and but chronologically before the other posthumous live release, this album is a bit the equivalent of the BBC sessions in Germany. This Bremen radio station apparently often committed groups to play a concert, recording them for a broadcast and some three decades later, the tapes are being issued for the first time legitimately. Eiliff (a deformation of Aleph) was a quintet (from Cologne) that developed an instrumental jazz-rock with a Canterbury feel and some ethnic touches (their guitarist, later with Guru Guru, was of Persian origin) and their two albums were rather wide-spectrumed and a bit unfocused sometimes a bit disjointed, even if the second was tighter than their debut.

Only two tracks on this session, the first being from their recent Girlsrls album and is easily the most representative of the two, with some excellent jazz-rock that seemed to come from a South-eastern English county. The second track is an extended version of their sidelong track (simply called Suite) of their debut album and lasts for over a half-hour. While it holds some excellent moments, it fairly indulgent, filled with lengthy solos, Bruninghaus' organ driving the group, but clearly everyone is rather proficient with their instrument. Leader drummer Landmann 's playing is reminiscent of Johnn Marshall (Nucleus) and halfway into the "epic jam", you could mistake them for Soft Machine with an added guitar player.

While not that essential, and rather short for a live recording, this album (along with the previous G.O.D. release Close Encounter With Their Third One) is definitely interesting for fans of the group and general jazz-rock fans.