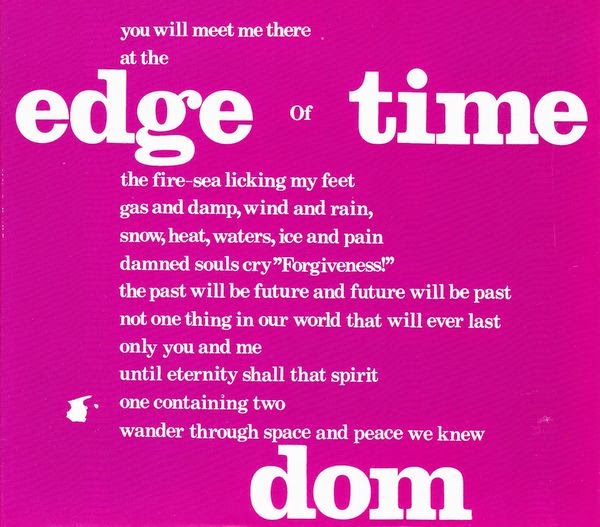 
Dom was a Krautrock quartet formed with members from Germany, Hungary and Poland in Düsseldorf, 1969. Laszlo and Gabor Baksay were escapees of the Soviet invasion of Hungary, who hooked up with Polish Reiner Puzalowski and German Hans Georg Stopka. Their music was an improvisational mix of Krautrock, Psychedelic Rock and Avant-Garde Jazz, that relied on acoustic guitars, percussion, flute and organ as well as electronics. They recorded only one album during their lifespan, Edge of Time , but they never gained as much fame as the more well known Krautrock bands. By the time this album was released, Dom had disbanded. The group did reform for once in 1998 to record a new piece of music intended as a bonus track for Edge of Time re-issue by the Second Battle label.

One of those albums you can really get lost into, especially with the aid of some greenery. A concept album about an acid trip, and it does sound like it, a very introspective one. A very creative interpretation, expressing and evoking a host of different states of consciousness and deep internal emotion, especially depressive, reserved, melancholy. The album is a trip to listen to, especially if you're already under a psychedelic influence, as this is psychedelic, tangential, breathing, pulsing, exploratory music. It took me a while to really appreciate, so i suggest at least a few spins (preferably in different mind states, and when you can really be present with the music). I echo luisman's remark that this album is meant to be experienced as a whole--a single journey. Its much better that way.

The music is mostly a mixture of krautrock flavors, psychedelic folk, electronic textures/effects, and ambient atmospheres, with the latter being the most pervasive. The music is very dreamy and psychedelic, and is imbued with a melancholic atmosphere not unlike many other more reflective kraut bands of the era. There is no electric guitar here, mostly just acoustic guitar, organ, percussion, flute, some harp-like instrument, bells, probably a few other instruments. The music is mostly instrumental, though there is a bit of soft spoken word type talking.

My favorite track here is "Silence", though all three of the other tracks are excellent.

The originally released lp and cd-reissue contain 4 tracks, each of approximately 9 minutes, a slightly short album at 36 minutes. Fortunately it was issued again by Second Battle in 2001, with 5 bonus tracks totaling almost 17 minutes! The sound is significantly improved on this new reissue. The bonus tracks aren't nearly as good as the music on the original album. The first four have a more arcane and less inspired sound that is of a similar style, but sounding like unpolished fragments and not fully formed ideas. The last track, "Let Me Explain", recorded in 1998, is trippy ambient similar to the feel of the record but with a distinctly different sound that features chopped-up speech, some uptempo disco/hip hop like drum machine pattern that starts halfway through, and some strange sound effects.. weird, and trippy.

Amazingly tripped out album, and very melancholic a the same time. A weird and very pleasant, seamless trip. Somewhat of a downer but if you are able to be more melancholic and reflective, it can be a psychedelic treat.
Posted by Unknown at 12:11:00 AM