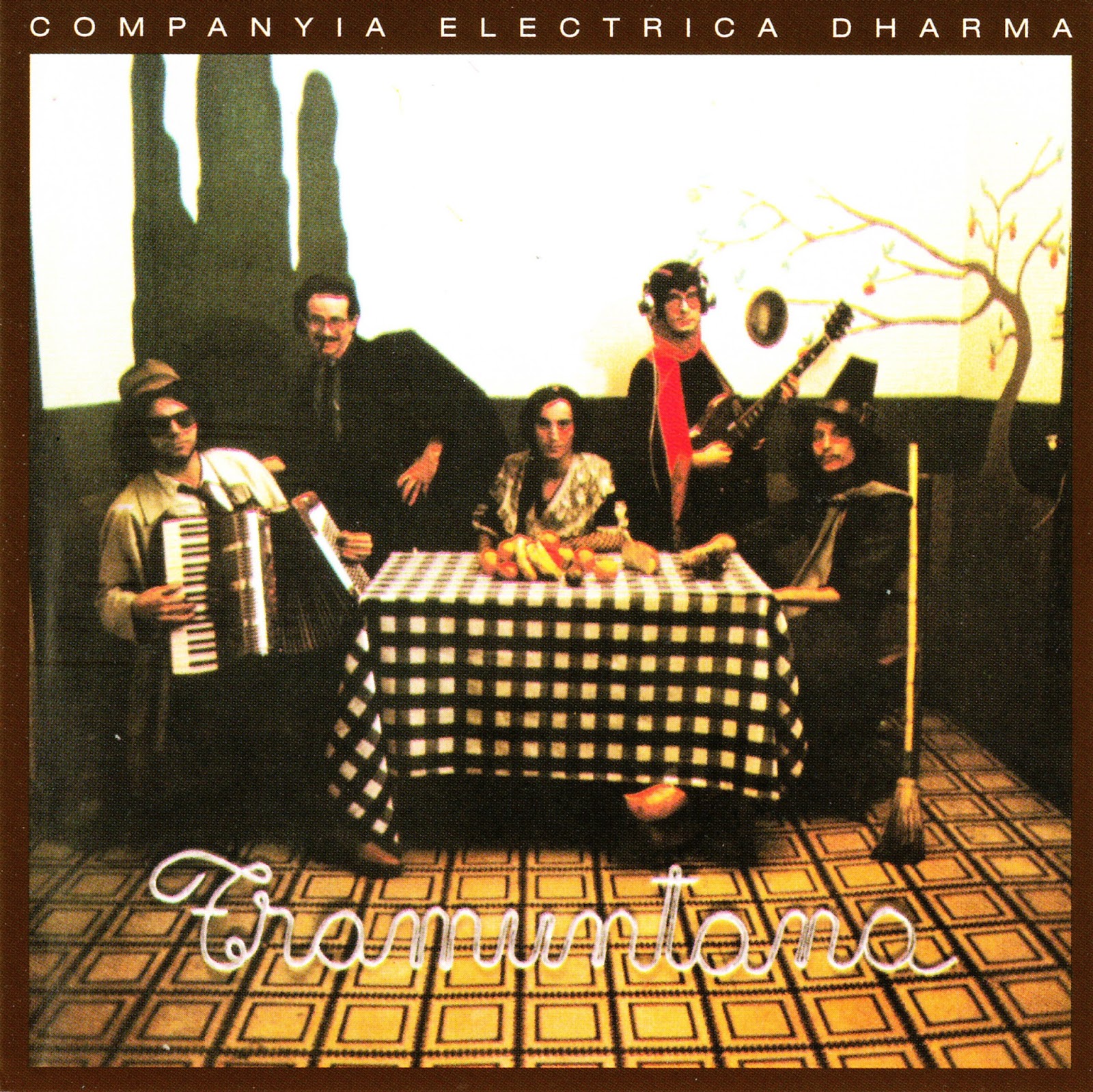 
After the beautiful debut album "Diumenge", Companyia Elèctrica Dharma headed for a more solidified exploration of their fusion-oriented interests and augmented drastically the presence of Catalonian folk elements into their musical ideas and arrangements: one of the most noticeable factors was the utilization of the soprano sax as an emulator of the Catalonian pipe. This tendency led CED to deliver a series of 3 studio albums (from the second to the fourth) that eventually were and continue to be regarded as fundamental for the installation of a Catalonian trend of progressive rock. IMHO, "Tramuntana" is the most accomplished one of these 3 albums. It bears an enhanced colorfulness in comparison to the previous album "L'oucomballa', which is made obvious by the presence of more instruments (flute, xylophone, trumpet) besides the usual array of guitar, bass, keyboard, soprano sax and drums/percussion. The opener is a speedy rocking version of a traditional tune called 'Tiru-tiru-ritu'; actually, this very tune was also used as the closing track to the previous album, but in that case the band used a "marching band"-style arrangement, while on this one this is pure rock-fusion on a frenzy, celebratory speed. This brief intro provides enough stamina as to prepare the listener for the more elaborated and dense moods explored in 'Focs de Sant Joan'. It develops a cohesive transition from soft to extroverted passages, with the former being folk-centered and the latter jazz-tinged. Esteve Fortuny's soaring guitar lines are just lovely, finding a proper accomplice in the playful moods drawn in by Joan Fortuny's soprano sax. Almost 5 ½ minutes of beautiful music, and then comes 'Moixeranga del Diable' to bring a 10+ minute long delivery of sonic mysticism. Its initial section is languid, eerie and slightly somber: the addition of trumpet helps to reinforce the overall grayish atmosphere, which lasts 6 minutes. A more playful motif settles in consequently, with the dueling sax and guitar harmonizing the melodic aspect while the drum kit, bass and electric piano fulfill the track's rhythmic scheme and cadence. A highlight, indeed! 'La Mediterrània sens Mor'' finalizes the album's first half with melancholic moods provided by the acoustic guitar's concise phrases, xylophone tender drops, subtle organ layers and a subtler chorale. An expression of serene beauty on a chiaroscuro background. The namesake track starts the album's second half: it lasts 10 ¾ minutes and it's mostly based on a jamming exercise that the CED guys master so cleverly. As usual, the soprano and the guitar alternate their lead roles while the keyboard delivers additional colors and the rhythm section creates a structure permeable to the tempo and mood variations that take place along the road. The calmer interlude is really lovely. Another highlight! 'Les Bruixes del Maresme' starts with a rfined crescendo of several winds - flute, tenor saxes, trumpet - before the main jam settles in. it should have been longer than its 3 ½ minute span, but well, that's how it is... The closer 'Festejada' reiterates the playful mood that has already been present in the most extroverted passages of the preceding repertoire, featuring an exciting drum solo and ending with a homage to Catalonian popular dances: this is a properly exquisite ending to an exquisite album. I just love it and grade it as a very important item for any good prog rock collection.