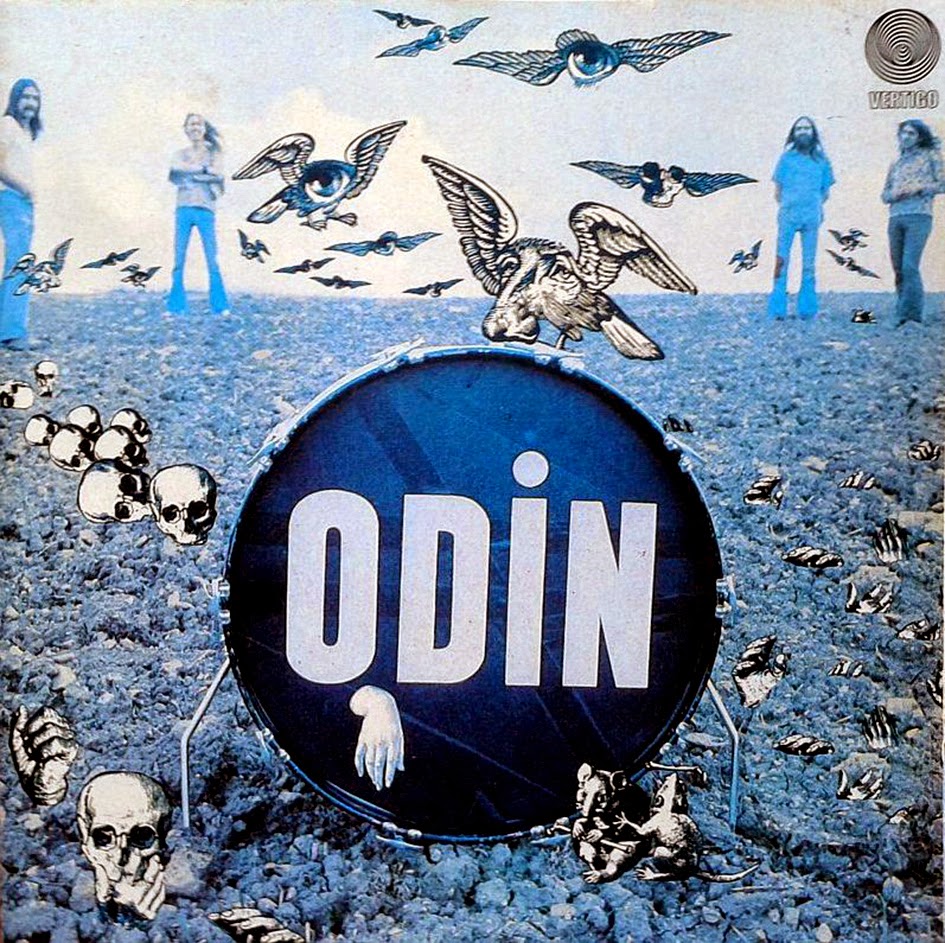 
Odin, like NEKTAR was a British band residing in Germany. While NEKTAR received some success (especially the United States when Passport Records showed an interest in their music), ODIN simply released one album, disappeared, and has pretty much been ignored. The album was released on the swirl Vertigo label, and due to its obscurity, one of the more desired titles on the label. While NEKTAR sometimes flirted with Krautrock styles (often so far as being called Krautrock, even if they weren't German), ODIN mainly stuck to a heavy guitar/organ-dominated prog style that was typical of the British scene of the early '70s. The band consisted of Jeff Beer on keyboards, Ray Brown on bass, Stuart Fordham on drums, and Rob Terstall on guitar, all credited to vocal duties, aside from the drummer.

If you love the sound of the Hammond organ, this album is a total must, often Jeff Beer played his organ with fuzz tone, not unlike DEEP PURPLE's Jon Lord, or Peter Robinson's work with QUATERMASS (whose style was much closer to Lord's in that band than say, when he was in BRAND X, which was much more similar to Robin Lumley's). In fact the band so much as covers a QUATERMASS song as well!

The album starts off with "Life Is Only", a totally killer piece stuffed with cool guitar and organ solos. There are some passages that bear more than a passing resemblance to ELP, in fact it's the only piece on the album to feature ELP-like passages. "Tribute to Frank" is a jazzy instrumental that brings to mind some of ZAPPA's instrumental works, so unsurprisingly the tribute would be to Frank ZAPPA. "Turnpike Lane" features a lot of wordless vocals, and at times almost reminding me of certain Italian prog bands. Of course, the guitar and organ solos are more typical of British bands. "Be the Man You Are" finds the band doing a nice, laid-back acoustic piece. Certainly the vocals are no CSNY, but still a nice piece. Then there's the cover of QUATERMASS' "Gemini". If you know the original, you'll find they pretty much stick to the original, except they added on guitars (since of course ODIN featured a guitarist and QUATERMASS didn't), and an extended solo the original didn't have. "Eucalyptus" is a rather laid-back instrumental piece with some early string synth (presumably a Freeman, as it's too early for the Elka or Solina, and the Eminent, which was around in '72, didn't seem to get much use outside of Italy and France). "Clown" goes back to the heavy style that is most typical for this band.

The album was luckily reissued on CD, and given the kind of music this is, this album would be perfect for Repertoire Records out of Germany to reissue. Instead a small German label called Living in the Past got a hold of it, making it not as easy to get a hold of, but if you can find a copy, get it!

Certainly the music is dated, the heavy organ/guitar format of the music makes it obvious that this was the early '70s, but as long as the music is great, as this album demostrates, I don't care.

Truly an amazing and forgotten gem of British prog. If you like early '70s guitar/organ- driven prog, this album is a total must!