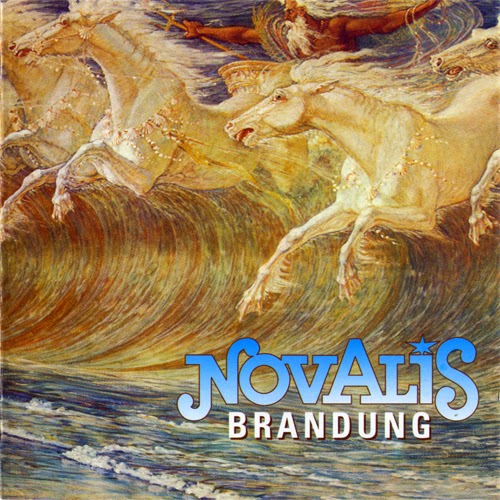 
By the time of their fourth studio album, Brandung (1977), Novalis had added new vocalist Fred Muhlbock to the line-up. As well as singing, Muhlbock also played acoustic guitar and added some very welcome flute to the band's sonic palette. For me this album represents Novalis at the apex of their career. I understand what others have said about the band adopting a more commercial approach here, and of having largely discarded the pastoral sound that characterised their two previous albums. Muhlbock's name features prominently among the song writing credits, so he must have had a big say in this change of direction.

Ok, so Novalis nail their colours to the mast straight away with Irgendwo, Irgendwahn. This is just finger-clickin' sing-along pop with a Mellotron added. I for one won't criticise Novalis for this song though. Prog gods Yes released the radio-friendly Wondrous Stories in the same year; what's sauce for the goose. Wenn Nicht Mehr Zahlen Und Figuren is more in traditional Novalis mode, being a quiet reflective ballad featuring acoustic guitar and chiming electric piano. This is followed by the near 9-minute Astralis, with lyrics that I believe were inspired by the band's early-Romantic namesake author. This is the album's main highlight in my opinion, with earnest vocals, memorable melodies and interesting instrumental development. This song also features Lutz Rahn playing one of my favourite keyboards, the clavinet. I don't know if Carlo Karges made off with the band's clavinet when he left after the second album, but I missed it on Sommerabend. Maybe the instrument didn't suit the material on that album. Whatever the case, it makes a welcome return on a couple of tracks here.

The remainder of the album is taken up with the near 17 minute Sonnenwende, which I believe may be a companion piece to Sommerabend's title song. Sonnenwende is a multi- part suite featuring four distinct tracks, the first being the instrumental Brandung. This features nice interplay between Muhlbock's flute, sounding very like Mellotron-flute, and Detlef Job's twanging guitar. The groove here is very much in the hypnotic style that Novalis excelled at, although it gets funkier just after halfway with some more of that clavinet. The second section, Feuer Bricht In Die Zeit, continues in similar up-beat mode but the final two sections are more in keeping with the band's pastoral leanings. Sonnenfinsternis is a contemplative ballad with sensitive flute and Hammond interplay. Dammerung continues in similar vein with tender synthesizer backed by acoustic piano and guitar, while Muhlbock's fervent vocal brings things to a suitably dramatic climax.

I was fortunate enough to get a copy of the deleted Repertoire/Brain version of this several years ago without having to pay 'silly' money. However it's now widely available in a mini gatefold version, so now's your chance to get hold of this fine album. Borderline progressive maybe, but delightful nonetheless.