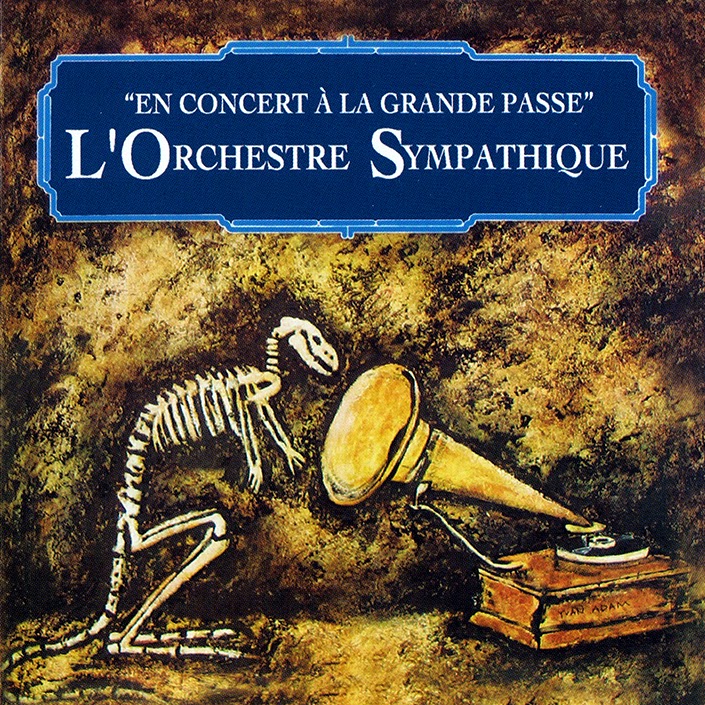 L'ORCHESTRE SYMPATHIQUE was a Jazz quartet founded in November 1976 by classicaly trained vibraphonist / percussionist Jean Vanasse, flautist / pianist Francois Richard, and drummer Mathieu Leger.They were joined by various bass players over the years.They released three live albums over their careers including this one recorded live at the La Grande Passe in April of 1979.They never could secure a record deal so there were no studio albums released unfortunately.The band would eventually move to Paris, France and toured Europe extensively from 1981-1985.They did reunite for one show at the Montreal International Jazz Festival in 2004. I must admit that after a few casual listenes I thought this was too flutey (is that a word?) but after some careful listens man I was so impressed with everything about this recording.The flute is prominant but the drumming is incredible ! And the bass is very deep and snarly. Just a very cool album overall. Love the cover art too.

"Citronnade" has this very presice and crisp drumming with lots of vibes and flute. It changes before 5 minutes as the percussion and drums lead and the flute settles back.Vibes and bass a minute later then the flute takes the lead again. Some vocal melodies too then back the original soundscape. "Houmalaya" opens with percussion, vibes and drums. Flute and bass before 1 1/2 minutes. It then settles with flute leading. A drum show after 5 minutes then the bass joins in after 6 1/2 minutes followed by flute and vibes. "Des Lacs, Des Rivieres, De Ruisseaux" is more of the same really and I like the chunky bass 2 minutes in. A calm 3 1/2 minutes in then it kicks back in a minute later.

"Perpetual Balouba" has this avant intro which is chaotic but very good. Piano in this one too.Vibes and drums take over as we get some growly bass and piano that come and go. Piano leads 2 1/2 minutes in then the vibes and drums return. Flute before 7 minutes. "Biplane" opens with flute then someone starts speaking to the audience as the flute stops.The flute returns when he's done speaking and it's quite spacey. Bass comes in and it's so impressive. It settles after 5 minutes with more spacey flute and sparse bass. Such a great track.

There must have been something in the water in Quebec in the seventies because there were so many talented bands. No just a lot of talent in that province. And this band was one of the best.