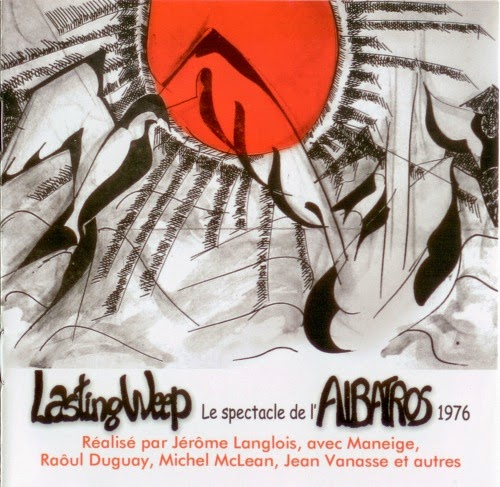 This second posthumous LW album is really the one that made the ProgQuebec releases really worthy, even if for this one, the group had to be revived more than four years after it had folded. Indeed, Jérome Langlois was working on this mega project, based on Sam Taylor's Rime Of The Ancient Mariner, which was to be Lasting Weep's first album. Alas, he never got around to finish it before the group's demise and he kept working at it during his three years in Maneige. As Maneige was slowly changing its Chamber-rock sound to jazz-rock, Langlois decided to leave Maneige, on the "musical difference grounds" and by chance, he was finally finished with his magnum opus. He received an offer to have it played live for a series of six shows over three nights in the Bibliothèque Nationale Du Quebec in the heart of the winter of 76. While it was recorded (with the full technical means as this was a provincial official command), it was never released until some 30 years later.

The show quickly became a multi-media affair with a mime troupe, special decors (including a giant albatross kite), some 17 musicians including the re-united Lasting Weep and the full Maneige line-up (Langlois and Bergeron playing in both), some members of Conventum, L'Orchestre Sympathique and more. The show was pre-rehearsed but not as much as wished due to the number of musicians involved.

Musically the Albatross is closer to Maneige's Les Porches, rather than the other LW release's jazz-rock, as it distils the same kind of chamber-rock. Ranging from classical derived theme to almost free improvisation passages (the start of Préparation) to a poppy tune (the almost-atrocious Jumping Jelly Beans), through the heavy percussion passages (Mort De l'Albatros) and full-drama and goose-bumps-guaranteed moments with Spanish trumpets (the middle section of the same track), the elusive, tentative and intrusive but not vindictive or provocative nature of One By One By One By One and

The introduction called Le Marriage, the only non-Langlois piece (bar the lengthy Schetagne-penned percussion pièce of Malédiction), written by singer Duguay, has some typical pastoral folk influences, but most interesting is the dark and gloomy-doomy bridge leading to the rehearsed free improv of the second track. This second track epitomizes best the whole opus, with its many moods and twists, but La Mort De l'Albatros and Voyage Se Transforme (pt1) are really the centre of the Oeuvre (with a capital O). The second par of the suite is not as near-perfect, but it ends on the reprise of Voyage Se Transforme (pt2, this time) which gives the envy to press your remote control's "play" button again.

Of course all is not perfect in the middle of Quebec's February blizzard as Albatros presents some flaws: Duguay's singing is uneven (and sometimes downright wrong in the Oiseau Des Iles track, ruining an otherwise superb track), the lengthy percussion/drum interludes overstays its welcome by a good four minutes, and other less notable imperfections. If you are a fan of Maneige's early albums, chances are you'll share the skies with the albatross and soar like an eagle for the duration of this album. Highly recommended by start with Maneige before getting to this album.