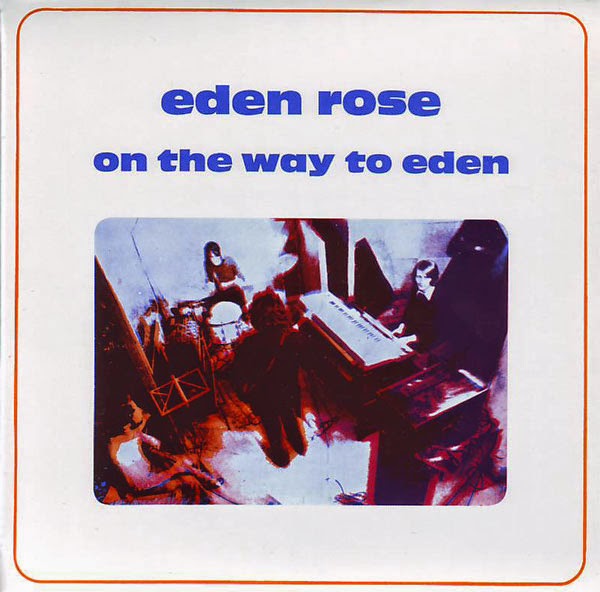 Henri Garella (keyboards) and Christian Clairefond (bass) went through various studio works as steppingstones to their musical career - e.g. Les Gardians, supporting the tour of Claude Francois in 1965. Only playing a role in supporting famous artists could not satisfy them and with this ambition Henri, Christian, and Michel Jullien (drums) whom they happened to meet in Marseilles, formed a jazz-rock outfit Les Golden, the roots of EDEN ROSE.

An artistic director of a small label named Katema introduced them to Jean-Pierre Alarcen (guitars), already renowned as a talented session guitarist in France, and at that point EDEN ROSE could give a first cry. At first Jean-Pierre played as a guest musician for recording their first single 'Travelling/Under The Sun' (1970) but could formally be a member of EDEN ROSE after releasing it.

Their first full album 'On The Way To Eden' (1970), recorded as a studio live one, is based upon the jazz-psych rock with full of keyboard and organ solo, played by Henri, the frontman. Anyway, surprisingly Jean-Pierre could master all songs for a few days, and with the terrific talent he led SANDROSE, the succeeding outfit of EDEN ROSE, to an unequivocal French Symphonic Prog Band.

Sadly their relationship with the producer could not go well on the recording and the problem make them break up a while later. They played a key role in forming SANDROSE in 1971 and the rosy story should be continued ...

'On the Road to Eden' is a pretty decent debut (and only release) from the pre-Sandrose group known as Eden Rose. The main thing missing in this version of the band is singer Rose Podwojny (aka Laurens), who would join up with the quartet after Eden Rose's demise to form what would become Sandrose (a lot of Rose's in this band's story). And indeed, all the tracks here are instrumentals, so it appears the presence of Podwojny/ Laurens may have been the missing ingredient considering that lineup achieved far greater notoriety than this one.

The music is surprisingly similar though; fusion-tinted and mildly psych-inspired, upbeat tunes with plenty of wailing and fuzzed guitar and Hammond organ aplenty throughout. If you're a fan of that free-flowing, piped late sixties Hammond sound you'll definitely get a kick out of this thing. Virtually every track is awash with Hammond bleating, interrupted or augmented only on tastefully few occasions by Jean-Pierre Alarcen and his blistering electric axe.

This is sometimes referred to as a psych album but it really isn't; indeed, the guitars are all a blend of modern jazz sounds and simple fuzz (but not too much), and the Hammond sounds both improvisational and rooted in contemporary blues riffs. There are a few exceptions, most notably "Walking in the Sea" which is both the longest and most indolent tune on the record with both electric reverbed riffs and acoustic strumming, as well as a lighter, more laidback keyboard arrangement than on any other song. The closing is rather subdued as well, but otherwise these songs are all exercised in keyboard foray and guitar soloing. Not that there's anything wrong with that, but honestly the sound is as dated as the album's copyright statement (1970), and maybe even a little older than that as most of these musicians had been playing together for several years and this album marked the culmination of their experience to-date.

If you're a big fan of Summer of Love-era psych then shy away from this one as that's not what it's about. But as a 'lost gem' Musea does a fairly good job of dusting it off and putting on a good face. There are also a couple other CD reissues including one from Japan that has supposedly been independently remastered, but I haven't heard them myself and given the prices I've seen on the web it's a safe bet I won't any time sooner either. The Musea version is more reasonably priced and much more accessible for most of us.

I'm going to say three stars mostly because the music isn't that much different than the Sandrose album except for the lack of lyrics, and I liked that one well enough. You may tire just a bit of the endless organ passages, but certainly not as much as I have of some of the endless two- and three-disc prog tomes put out by the group's contemporaries in the years that would follow this release. Mildly recommended for fans of light psych and Hammond organ freaks..