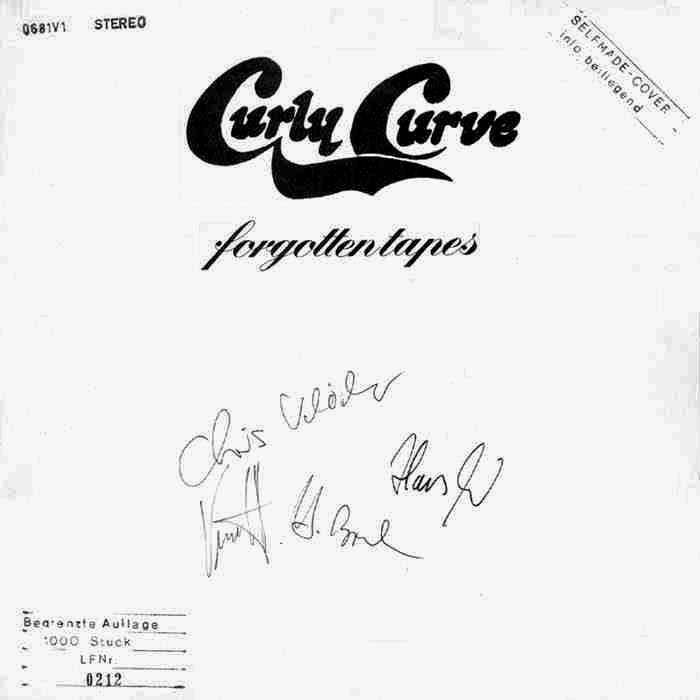 This band was from Berlin and regularly appeared at the Zodiac club between 1968 and 1970. Probably their music was more psychedelic in those early days than revealed later on vinyl. The Brain album, recorded at the Dierks studio in July 1973 with Frank Oeser producing, had a nice fold-out cover but sadly wasn't particularly impressive musically. Standard rock songs with a slight heavy blues touch and the key changes and guitar solos you have all heard before. Very American sounding music with the tendency to get trapped in boogie-mode. I would compare it to the Gash album, a contemporary green Brain release.. The album of 'forgotten tapes' was compiled from rehearsal recordings on a TEAC four track tape machine in 1974. For this reason, the sound quality isn't very professional. There were plans for a second album, which never saw the light of day. The music, as revealed on a limited private release in 1981, was more heavier but didn't hint at anything outrageous. Brain apparently lost interest in Curly Curve. Strange to note that Herkenberg was a member of the 1967 Tangerine Dream line-up!


As with other Garden of Delights releases, this reissue of Curly Curve's Forgotten Tapes, a collection of previously unreleased tracks originally released in 1981 on the Okotopia label (the only release on that label), contains the history of the band, photos, and reproductions of the vinyl and previous CD versions. Care has been taken to duplicate, as close as possible, the original packaging of the albums, this one being no exception.

What then can be found inside this well-done package? Curly Curve were a German band that formed in 1968 and split up around 1975. Instead of the krautrock/progressive rock that many of their contemporaries were recording, they mainly played blues-rock. You'll hear more than traces of Allman Brothers Band, Doobie Brothers, a dash of Jimi Hendrix, a little bit of Boston (though they predate the latter as a influential entity by four years), Lynyrd Skynyrd, early Deep Purple, etc. The dual guitar solo in "Bunch Of People" is so reminiscent of "Melissa" (the classic Allman Bros. tune) and yet at the same time, one of the guitars sings like classic Tom Scholtz (mainly of their their self-titled debut). The string slingers are Martin Knaden and Hanno Bruhn, the latter of which also plays bass and sings on this release.

Each of these tracks, there are 10, are reminiscent of the classic tracks by the above mentioned bands - contemporaneous influence. "Dusty Morning" is pure Allman Brothers, but darn if I can't name the song. "Deception" begins like they'll either break into the "I'm A Man," "Long Train Runnin'" or something by James Brown - or maybe James Brown singing a Doobie's tune, as the voice of Bruhn has that funk of Brown to it, yet the guitars have that Doobie Bros' groove. "Lookin' Back" wouldn't have sounded out of place on an early ZZ Top album, somewhat like "La Grange," but it is most like Boston's "Smokin'".

Curly Curve weren't all guitar, though the guitars drove the music. It's all held together by the tight bass work by the late Kurt Herkenberg and the percussion of Hans Wallbaum. The keys take a more prominent role in "My Little Zoo," a track which also throws a little Rolling Stones into the mix here and there, plus a little bit of "My Woman From Tokyo"-esque Deep Purple. Creedence Clearwater Revival get the nod with "Down By The Bay," where the bass is more prominent in the mix. The original compilation ended with the slow, Joe Cocker-like blues ballad "Morning Light," though Bruhn's voice is a little less world weary and whisky soaked than Cocker's.

The first of the bonus tracks, "Thoughts Of A Man," is another slow-burn blues number, but much rockier than the first, and moving more towards psychedelic. Keys are more prominent, guitar provides the accent, the bass and drums regulated to time keeping duties. "I Wanna Try You Again," begins even more "psychedelic" in its styling, the guitar work reminiscent of Jimi Hendrix, but then shifts strongly to a sad blues number. "I Can't Quit You Baby" comes to mind, the soul element turned up a notch here, but it has more to do with arrangement than with pacing.

Okay, so it wasn't really prog, but if you dig that classic 70's US Southern Rock sound, here's some more stuff from an unexpected quarter. Despite its reliance upon a style popular at the time these tracks were recorded, there is nothing negative any one can really say about them. The production is a little muddy, but as the re-release was taken from the actual vinyl, the reproduction is terrific.