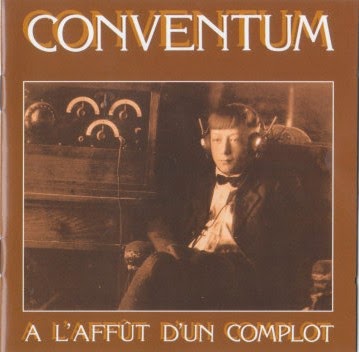 Conventum is one of those typical Quebecois projects to have come in the second half of the 70's. As soon as 72, Duschene arrived in a cultural circle which included sculptors and theatre groups. For some five years anf much musicians passing by, through, back or away, Conventum lived a slow birth, but will see its first album on the ultra small (and now ultra collectible) label Le Tamanoir. By this time, Conventum was developing a progressive music crossing chamber music and rock. Their first album, A L' Affût D' Un Complot (on the look out of a plot), this music was also highly theatrical, acoustic and satirical, and in many regards if not really avant-garde, sufficiently groundbreaking, but also full of traditional folk music around that time was recorded a concert in their home base which will be released much later (as bonus tracks) and presents a much more experimental phase/facet of theirs. The following year, Conventum released their second album on the same crazy and satirical musical grounds, Le Bureau Central des Utopies released on another ultra small label Cadence. Unfortunately, this was to be their last album and most musicians will drift into different directions. Conventum is best appreciated with a good mastering of the French language (their French singing is actually quite neutral and easily understood), but can be easily enjoyed by most adventurous progheads, as the music is often breathtaking.

While this debut album was released on Le Tamanoir label, it received two CD release both with the original stupendous debut album, but also the much weirder live show they held on April 17, 1977. For this album, Conventum presented themselves as a sextet, but were often enhanced by many more - including Kaczinsky, Forestier and Leger (Orchestre Sympathique). Their mostly acoustic sound is very impressive, highly cultivated (very inclined on semi-medieval and old folk music), half of it instrumental, and is best described as avant-folk-prog.

So this release could be presented as two different albums and actually are quite different. As much as the original album is superb, full of delicate ambiances and delightful folk and classic fusion and can be used by any proghead to clear his mind of his problem and escape into a wild world of beauty, as much as the live album is demented, demonic, weird, lurking, somber , macabre (at times), demented and frightful, but very impressive and theatrical.

After a short intro, where Coventum ask you if you are comfortable (you are in for one hell of a ride), a flood of guitar arpeggios is overwhelming you as the small piccolo flute and alto sax are accompanying the superb vocal duet (Les Criticotteuses is a superb play on words combining criticizing and knitting) when two violins are underlining this bed of desire: spine-chilling, yet, no-one will resist it. The following title track is much in the same vein, but become slightly more urgent and inquietant, but the lyrics are about as grandiose as Gabriel or Hammill could ever get, and the guitars oscillate between Anthony Phillips and Fripp's The Crafty League Of Guitarist. La Bataille (the battle), the next track is also the poignant theme track from a movie from a member of Le Conventum artistic circle. The mood is dark, grave and beautiful, with the strings setting such a splendid bed of dreams for the guitars to lay it on thick the drama. Le Piège (the trap) is also from the same movie, but is rather quieter but still quite impressive although, it is quite schizophrenic too, with its wild choirs appearing from nowhere, blowing up a storm and disappearing as quick as they came. The next three tracks are instrumental and still in the line of the album reaching from chamber music to slightly modified jigs. Last track was also a theme for yet another colleague's film and it is yet another flamboyant success around a very modified jig>> absolutely masterful.

The second part of the record is a live concert and presents a very different facet of Conventum, much more tense, nervous, slightly more aggressive, very theatrical, but also just as dramatic (if not more) than the studio album. Although still excellent, (but maybe less immediate without the accompanying images), these tracks suffer from the proximity and superb beauty of the studio album tracks. Here the mood is more to a nervous Stravinsky or psychedelic Prokofiev (Peter And The Wolf). Very impressive, but for this party, French language becomes almost mandatory, but their prose is impressively poetic. Clearly Conventum was a forerunner of sorts for future Quebecois groups such as Miriodor and Interference Sardines. Their capacity at making this acoustic chamber music but rendering incredibly rock with just a few ingredients is immense and Conventum deserves to be re-discovered to its true value.