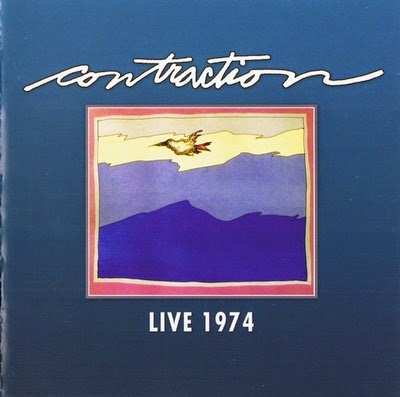 
"During the Winter of 1974, CKVL-FM presented a Progressive Rock concert series entitled "Performances", recorded live at Studio Tempo in Montreal.That night, we shared the bill with the British group GENTLE GIANT. It was a memorable evening. Due to technical problems having delayed the English group's concert,we only began to play at around 1:00 AM in the morning, in a state of advanced fatigue !" I really enjoyed their studio album called "La Bourse Ou La Vie" in fact I would rate it better than this live release and I noticed that Hugues has the same feelings. It's not that this live performance isn't a good one, but I do have issues with it especially early on. Christiane the singer reminds me a little of Joni Mitchell and she sings in French and English during this concert. My problems with the early part of this concert is that she seems to get show-cased. It's all about the vocals until the fifth track, and that's disappointing because I love the instrumental work of this band which seems to be more the focus on the studio album I own.

"We Made It" is one of those songs with the focus on the vocals but we do get some nice relaxed guitar led sections. "Chat Bruinne / Star-Child" is another mellow tune with Christiane taking the spotlight. "Solid Shine" is more of a pop song. "Le Temps Fuit Comme Une Ombre" is led by vocal melodies and guitar early before the drums and piano join in. It turns jazzier after 6 1/2 minutes.This is the first track that I really enjoy. "Trois Ou Quatre" is even better and a top three for me. It comes to life after a minute and we get a great sound 3 minutes in.This is more like it ! This continues right to the end. Nice. "42 Nord" is a short pastoral track with vocal melodies. "Pixieland" is a top three as well with the prominant bass to start as it builds quickly.Guitar and piano lead a minute in. Excellent sound here.

"Sagesse" is like the earlier tracks with the focus on the vocals. "La Bourse Ou La Vie" is the almost 18 minute closer and my favourite.Vocal melodies come to the fore 1 1/2 minutes in and the guitar follows leading the way with piano and drums.The guitar is lighting it up before 4 minutes. It then settles back 5 1/2 minutes in but then slowly builds. A calm before 8 minutes as a laid back sound with vocals comes in. Another calm 11 1/2 minutes in then solo piano takes over.Vocal melodies join in at 13 1/2 minutes. It starts to kick back in after 15 minutes. A nice ride.