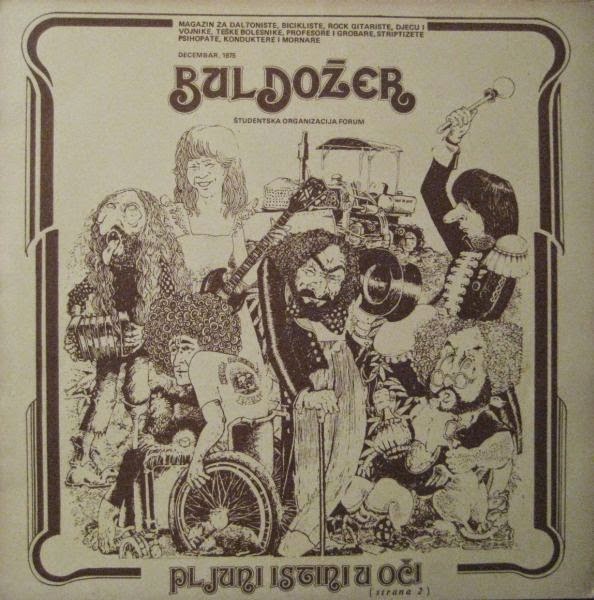 
BULDOZER was formed in early 1975 in Ljubljana, present Slovenia, when an avant-garde singer/songwriter Marko BRECELJ joined the band SEDEM SVETLOBNIH LET ("Seven Light Years") led by guitarist and lead vocalist Boris Bele. Apart from them, the original line-up included keyboardist/composer Borut Èinè, bassist Andrej Veble, lead guitarist Uros Lovsin and drummer Stefan Jez. They released their debut album "Pljuni istini u oèi" in December 1975 to shocking reactions of the public and music business authorities due to its twisted black humor filled with sarcasm, satire and touching "sensitive" issues of drugs or pornography. They also utilized the Zappa-like stage freak-out performances and ridiculed some generally accepted morals of the so-called socialist state of Yugoslavia. The cover sleeve of this album was designed as a magazine sheet (similar to JETHRO TULL's "Thick As A Brick") filled with funny and ridiculous social vignettes and some pornographic cartoons. After the first circulation was sold out, the recording label PGP RTB refused to print more copies. In 1976 they recorded the second album "Zabranjeno plakatirati" but due to their label's policy (the band had to modify their lyrics if they wanted to release the record) it was released only in late 1977, when they joined their hometown label Helidon. In the meantime, the rhythm section changed, so the bassist Vili Bertok and drummer Tone Dimnik participated in studio sessions. Brecelj left the band in 1979 to pursue solo career, while Bele-led BULDOZER embraced then popular punk and new wave aesthetics to gain enormous popularity across ex-Yugoslavia. New members in this period were guitarists Davor Slamnig, Janez Zmazek and drummer Dusan Vran. Highly eclectic studio album "Izlog jeftinih slatkisa", including a radio smash hit "Zene i muskarci", and double live record "Ako ste slobodni veèeras" are among the top-sellers of this era. Still, many of their song lyrics and stage theatricals are full of the local meanings and hard to comprehend outside of the scope of the post-titoist Yugoslavia. Along with his band activity Bele also worked as a chief music editor of Helidon label and succeeded in this period to purchase the copyrights of their debut from PGP RTB, so the reissue came up in 1981 to face very affirmative reviews. Their activity slowly diminished in mid-1980s, after the poor album "Nevino srce". Although they never officially broke-up, their "come-back" album "Noè" was released more than 10 years later, in 1995. BULDOZER was the first domestic rock band to release an album in a compact disc format in former Yugoslavia, not counting international imports - it was a compilation album "Nova vremena" in 1989.

First two albums "Pljuni istini u oèi" and "Zabranjeno plakatirati" are essential for avant-prog listeners who like slightly psychedelic moments with Hammond organ and "acid" guitar solos. Their lyrics and performance are quite anarchic and close to RIO movement. "Izlog jeftinih slatkisa" is a diverse collection of more accessible songs ranging from punk aggressiveness to pure psychedelic moments, while "Noè" presents a refreshed band of the 1990s that is also worth checking out.

BULDOZER's debut album was among the most revolutionary works of popular music issued in the former Yugoslavia. It came out in 1975 just to be withdrawn from the market shortly thereupon. It was so outrageous that PGP label refused to print more copies after the first circulation was quickly sold out.

The avant-garde nature of its expression is best detected from the lyrics, which are unfortunately not easy to translate into English. The title means roughly "Let's Face the Truth", while the cover sleeve is designed as a magazine page, in the vein similar to JETHRO TULL's "Aqualung", full of black humor, semi-pornographic strip- cartoons and ridiculous sarcastic "articles". The opening miniature "Najpogodnije mjesto" ("The Best Place") is Brecelj's lamentation "I am sorry sir, but I am not from this town, so I would like to know where is it here, ahem... the best place to commit suicide", backed by psyche bottleneck blues guitar. "Zivot to je feferon" ("Life Is But A Chili Pepper") is a highlight of psychedelic avant-prog, with strong Hammond, excellent guitar solo by Lovsin and vocal craziness of Brecelj. It is followed by equally stunning and slightly more aggressive masterpiece "Sto to radis, Buldozeru jedan" ("You Buldozer, What Are You Doing"), carrying a freaky story of a negligent character called Buldozer who ate a beef soup including cooked meat, just to face the revenge of a bull who complained "what are you doing?/you have been eating my mama!" What to say? - I mean, you have to be either a bit deranged or a pure genius to put such stuff onto a rock album!!! "Blues gnjus" is, believe it or not, a wonderfully played straight blues composition with -hmmm- not so straight lyrics. The Brecelj character here is an animal lover so that he welcomes all sorts of germs and bacteria into his head and body, where there is "enough blood for all of you, my dear beasties..." At the end, he cannot stand anymore and starts vomiting out into a toilet flusher... pure disgust! "Ljubav na prvi krevet" ("Love At First Bed") and "Yes My Baby, No" are two hilarious mockery of love and romance that it brings laugh to tears, with lyrical acrobatics and wordplay that is sadly restricted almost to South-Slav speaking people only.

The timeless nature of this unique album is best proved when, at the peak of New Wave explosion in 1981 in ExYU, the reissued "Pljuni istini u oci" this time by Helidon label, was again warmly received not only by the (punk and new wave) fans but also by critics and even general pop consumers. To my knowledge, this kind of freaky satire and humor can be found only in Frank Zappa's famous works of the mid-1970s. This album is a must for every respected prog collector!