Ananta
1980
Songs From The Future 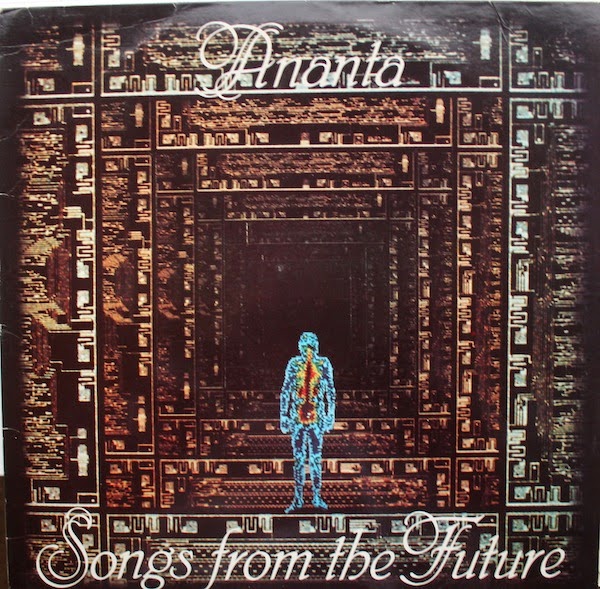 
Keith Emerson's bombastic keyboards, Queen's melodies and Jon Anderson's esoteric lyrics with a fusion touch ala Mahavishnu Orchestra and some folk inspired sections... all that written and performed by a Latin Grammy winner....

Ilan Chester is well known as one of the prime latin pop singers/songwriters. But what is little known is that before his hugely successful latin pop career he participated in quite a number of Progressive Rock outfits as both singer and keyboardist with such influences as Keith Emerson, Rick Wakeman, Steve Winwood, Mark Stein, etc.

Ilan's most successful prog project was his 70s collaboration with the Spiteri brothers (other stars of the Venezuelan prog scene of the 70s and 80s) while living in London. Such project was named Ananta and released one album in 1977 (Night and Daydream). In 1980 Chester decided it was time to continue with the project, this time in Los Angeles, and gathered a crew of Venezuelan musicians to record Songs From the Future in 1980.

This is a concept album structured in a very particular way, it is based on a story written by Steve Perry about how would the world look like in 100 years from 1980. The band took advantage of the need of splitting the album in two sides (sides A and B of the vinyl) and divided the concept in two parts. Side A is taken by the 5 part suite "Songs From the Future" which narrates a rather pessimistic view of the world as reflected by the chaotic nature of the music. Side B, in opposition to side A, presents the description of an optimistic future through cheerful and uplifting melodies.

The "Songs From the Future" suite, musically, has its good and not so good things. Individually, each section of the suite would have a rating between 4 and 5 stars; but as a suite it fails to be cohesive and we get some abrupt breaks between sections, this makes it loose some points with me.

**"Questions" opens the suite with a keyboard display courtesy of Ilan Chester which demonstrates his amazing ability as a keyboardist and the different keyboard and synth sounds he'll use throughout the record. 4

**"Apples" moves forward with a more accessible sound, nice vocal harmonies and a combination of acoustic piano with electric instrumentation; this combination remembers me of Queen, specially after a fantastic guitar solo that could have easily been Brian May's work... 4.25

**"Over the Edge" is one of my favorite and most experimental segments of the album and it moves towards a jazz-rock style. It opens with some really nice drum, guitar and keyboard performance that builds up to a sound reminiscent of Mahavishnu Orchestra, this impression is enhanced by a mind-blowing violin intervention. 4.5

**"Logical Progressions" returns to a most accessible establishment in which the Queen- like harmonies are still present and the overall sound reminds of Electric Light Orchestra. 4

**"Phase Three" ends the suite with some electronic "futuristic" sounds. An appropriated ending for the first part of the story.

Songs From the Future's overall rating is: 4.19

"Break with the Past" starts the uplifting part of the album with what is probably the most uplifting piece in it. It is a beautiful piece led by the vocal harmonies (Moon Safari fans will enjoy this immensely!). 3.25

"The Weaver" takes a folk approach to the music, still uplifting and really accessible with some nice flute playing thrown into the mix... kind of Jethro Tull meets Moon Safari. 3.75

"That Precious Machine" is a mildly hard rocking piece with some really nice bluesy piano and organ playing and some interesting breaks; and I still get some more of those vocal harmonies I am enjoying so much + a well performed guitar solo. 3.75

"Dawn" closes the album with a ballad led by Ilan singing and playing piano beautifully (with some atmospheric synths in the background... and at some point something that sounded like a mellotron). This is the kind of piece you would expect from an Anderson & Wakeman collaboration, a very nice way of closing the album. 3.25

The lyrics are very well written, but at times they get too esoteric (specially on side B).

There's not a bad song in the album and we get some very interesting things, but at the end nothing really essential.

That album has some minor problems such as the sound quality which is less than perfect (it is listeneable though) and the lack of cohesiveness for what is intended to be a concept album (specially inside a suite).

3 stars for a really good but non-essential album. If you manage find it, I'll recommend you to buy this rarity of progressive rock, it's worth it...

You'll see.... every once in a while you'll feel like playing it... It's melodies are simply unforgettable!