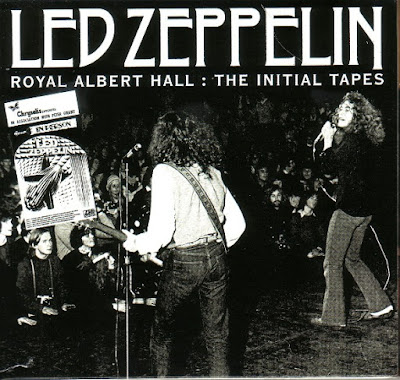 Led Zeppelin’s January 9th, 1970 appearance at the Royal Albert Hall is one of their most important gigs in their career.  This was their first high profile concert in London after Led Zeppelin II displaced The Beatles’ Abbey Road from the number one position in the charts and drew much attention.  The band also understood its significance by professionally filming and recording with the intention of releasing it as a film later in the year.  That plan was scrapped and the footage wouldn’t be officially issued for another thirty-three years.  The soundtrack for a video and a radio broadcast are sources for all of the older releases including the very first on vinyl found in Strange Tales From The Road and The Final Option on RSR International.  On CD the original Tarantura issued both sources on Jimmy’s Birthday Party – The Royal Dragon (Tarantura RAH 1/2 / – / 1995).

Later a much clearer soundboard tape surfaced with “How Many More Times” and the encores that sounded fantastic and was issued on Royal Albert Hall (Red Robin), but running much too slow.  This tape was subsequently used on Historical Birthday (Shout To the Top STTP-034), Strange Tales From the Road (STFTR 001-008).  A nice sounding edit of the two sources was released on Royal Albert Hall 1970(Celebration SOBO-015), running at the correct speed and coming with a VHS cassette with a high generation copy of the then existing footage.  A bulk of this show was finally released by the band in 2003 on the DVD (minus “Since I’ve Been Loving You,” “Long Tall Sally,” and with “Heartbreaker” and “Thank You” only in fragments).  Several years afterwards Empress Valley issued the four-disc Live At Royal Albert Hall(EVSD-421/422/423/424) with an edit of the DVD audio with the radio broadcast on the first two discs and the DVD audio alone on the second two.  The virtue of this set is the debut of the solo in “Heartbreaker.”  However, this set has been described as “a mess” with numerous problems.

Royal Albert Hall:  The Initial Tapes on Godfather is similar to the second two discs of the Empress Valley set by presenting the soundboard with the edit in “How Many More Times.”  The sound on Godfather is excellent sounding, very powerful, and sounds better than many official releases and is a significant upgrade over EV.  The gain has been increased over the Empress Valley which also raises the level of noise in the quieter passages in the early part of disc one.  This is only really apparent in Robert Plant’s introduction to “Heartbreaker” though and isn’t an issue.

Zeppelin played at the Royal Albert Hall six months before on June 29th, 1969 for the “Pop Proms,” supported by The Liverpool Scene and Bloodwyn Pig.  This was the third show of a short eight date tour of the UK with only Bristol and this show having documents available. A review of this show in the New Musical Express states:  “It isn’t hard to understand the substantial appeal of Led Zeppelin. Their current two-hour plus act is a blitzkrieg of musically-perfected hard rock that combines heavy dramatics with lashings of sex into a formula that can’t fail to move the senses and limbs. At the pace they’ve been setting on their current seven-town British tour there are few groups who could live with them on stage.  I spoke to Jimmy Page after the show and he confessed that the whole band had suffered extreme nerves beforehand, mainly because people like John Lennon, Eric Clapton and Jeff Beck had requested tickets.  ‘But it was just like it was at the Albert Hall in the summer,’ said Jimmy, ‘with everyone dancing around the stage. It was a great feeling. What could be better than having everyone clapping and shouting along? It’s indescribable; but it just makes you feel that everything is worthwhile.”  (“Zeppelin Put the Excitement Back Into Pop” N. Logan).

The show begins with the new cover arrangement of “We’re Gonna Groove” which segues perfectly into “I Can’t Quit You.”  Both of these were used on Coda.  The former was treated to a new spaced out guitar solo recorded specifically for the final Zeppelin album, but this is the unedited, aggressive arrangement used to open the show in early 1970 before disappearing forever.  “Dazed And Confused” follows and this sixteen-minute version keep the intensity level up.  Plant includes a reference to “Cocaine Blues” arranged by Rev. Gary Davis, “Hey mama, won’t you come here quick / This old cocaine is makin’ me sick.”

Afterwards Plant says, “this is the second time we’ve been here and I think we had more nerves the second time than the first.  I know I did.  But anyway we got over that with Birmingham Town Hall a couple of days ago where it was quite disastrous.  The people hadn’t seen anything like it before.  That was the attendants first assignment.  Who filled their trousers?”  The recording is cut after the solo but Page includes Bouree.  “White Summer” follows and is a twelve minute masterpiece and this is one of tightest versions on tape.  Listening to the track is mesmerizing and it is easy to get lost in the eastern atmosphere of the music.  It is such a contrast to everything else played and Page comes across as a true virtuoso.

“How Many More Times” lasts twenty minutes even with the band introduction edited out.  Plant get into Neil Young’s “Down By The River” as well as the “The Hunter,” “Boogie Chillun,” “Move On Down The Line,” “Leave My Woman Alone,” and “The Lemon Song.”  The band are so focused that they don’t want to stop playing the song and even Page mentions this in the NME article when he says, “‘We’d actually finished ‘How Many More Times’ and were going into the ‘Lemon Song,’ but the audience was still clapping so we just went into another riff and carried on for a further ten minutes.'”

The long encore section follows and there are some issues regarding the proper placement of “Bring It On Home” in dispute. The Concert Filelists “Bring It On Home” as the first encore followed by “Whole Lotta Love,” “Thank You,” “Communication Breakdown,” “C’Mon Everybody,” “Something Else,” and “Long Tall Sally” and Empress Valley follow this sequence.  (This list is also odd since “Thank You” was played early in the set the previous night and wouldn’t be an encore until the following year). The official Led Zeppelin website claims that “Bring It On Home” was played fourth after “Whole Lotta Love,” “Communication Breakdown,” and “Thank You.”  The official DVD places it as the final encore after “Something Else” and Godfather uses this set list as a guide. All but Empress Valley and Godfather are titles released before the official dvd release of this show.  Overall given the packaging, availability and sound quality, Godfather produced the definitive version of this classic show and is essential to have.
Posted by Zen Archer at 2:49:00 PM 1 comment: Links to this post