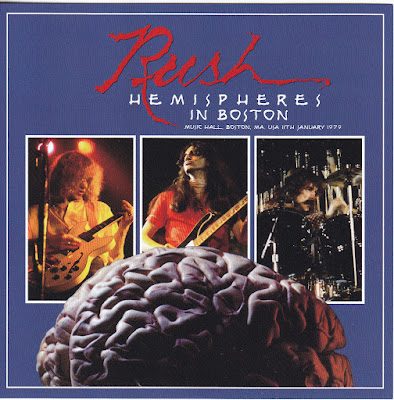 
While it was a painful birth, Rush’s sixth studio album Hemispheres would further propel them up a few rungs in the world of rock music, and most certainly by their own terms. The third and last studio album to feature a side length composition, the brilliant title track, it would also showcase a couple shorter songs that would showcase the band’s future output for the next decade. The tour to support the album would begin mid October 1978 with an extensive Canadian tour and end with a European leg with an American assault sandwiched in the middle. The Hemispheres tour is no stranger to the collectors market and trading circles, there are many high quality recordings, both from soundboard and audience sources, this new release features one from the latter and is culled from the wonderful Dan Lampinski collection. Dan was a taper who used high quality equipment and media to record many concerts in the Massachusetts and surrounding areas, most of his recordings surfaced a few years back and gave us something to look forward to each Sunday as a new recording would be posted on a well know tracker. While Lampinski enjoyed a variety of rock music, as evident of who he recorded, it seems like he had a special place for Progressive music, thankfully underground hard rock prog masters Rush were on his radar.

He would record the group on their stop in Boston at the Music Hall using a Nakamichi 550 tape recorder with two Nakamichi CM-300 microphones and Maxell cassettes. His capture of Rush is a wonderful three dimensional capture, it is just slightly distant sounding and there is a small level of tape hiss present yet is an extremely clear and detailed recording and the balance is virtually perfect. It is sadly incomplete, the band’s set list did not make it easy for tapers to apply their craft and many recordings from this tour have cuts is similar areas, these cuts will be address in the review.

“All right Boston welcome back from Toronto Canada…Rush” is the intro and the band lunches into Anthem from Fly By Night, an aggressive opener that has been a concert staple since its inception some three years prior. The sound is more distant at the beginning until Dan gets his gear situated and levels set, needless to say a couple minutes in you can clearly decipher all the instruments, most importantly Geddy’s bass as I love to hear him pluck the hell out of it. The herbal influenced trek A Passage To Bangkok follows and Ged’s greeting to the crowd amid shouts of “sit down”. I love Alex’s riff for this song, electric middle eastern with a metallic flair, a one Mr. Blackmore would be proud of it for sure. Lifeson’s solo is ambient yet intense over the top of the Synthesizers the song gets a nice ovation.  The coupling of By Tor and Xanadu is brilliant, By Tor is punctuated by Neil’s precision drumming and the transition into Across The Styx into Xanadu is wonderful, the band’s use of musical technology and ambient instruments like wind chimes make for a prelude to the mind mellowing journey that lies ahead. Probably my most favorite Rush compositions Xanadu is perfection and when listened to today, sounds as if it could have been written years before it was by the English Prog giants and still sounds as fresh and excited today as it did then. The song abruptly ends during the last seconds of the song and catches the band by surprise, Ged tells the audience “Well we seem to have a power failure”. The rowdy fans in Boston fill in for a few minutes while the issue is dealt with and they return with Something For Nothing, again the use of synthesizers adds a new dimension to the metallic classic from 2112.

Rush would perform the entire Hemispheres record on this tour (well most of the tour) and the first of the new songs is the whimsical tape of feuding topiary, The Trees. The song is quite powerful live, the use of Taurus pedals makes for a heavy bottom end and the song contains all the elements of their progressive styles in a short, tidy composition. A soundscape transitions the song into Cygnus X-1, someone close to the taper remarks “It looks like a movie set…” in awe of the visual and lighting. Just as close to my heart as Xanadu (no pun intended), I frickin love this song, the bombastic riff is so heavy and the precision of the group is incredible. The band has been playing a truncated version of the song on the R40 tour, something that makes you want to scream in pure pleasure! Geddy’s introduction to Hemispheres must have caught Dan by surprises as he knows he does not have enough tape left to capture the entire 18 minute epic and does a quick tape flip from :08 to :34 mark, the gap is filled with the Frankfurt 5/28/1979 soundboard, the splice is seamless and well handled, although the use of the soundboard is a testament to quality of the recording but I may have chosen an audience recording like Chicago or Vancouver. Let’s pause for 18 minutes to listen….. Ah, the intricate and mechanical Hemispheres is wonder live and one must listen unbothered to really grasp the full scope of the music. It segues nicely into Closer To The Heart to end the first disc and we can take a collective breath.

The second disc begins with something “from Hemispheres…this is called Circumstances”, short simple yet heavy as hell is circumstances yet sadly the song would not make the long haul on the tour, it would be dropped for the UK and European dates. The song could pass as something from their earlier works like Fly By Night or 2112 as it is Rush at its hard rock best. A Farewell To Kings follows, like Circumstances is very heavy and most English sounding. After the two short songs, the band and listener want to stretch out again, the first is the journey like instrumental La Villa Strangiato that comes from direct segue from Kings, you can here some crazed fans in the distance beating on their chairs but the music seems to have a calming effect on them. Clocking in at just under ten minutes the song is musical perfection and the band’s playing on the song seems elevated by its design. Alex’s solo is one of my favorites, so emotive then the other two join in for a riff feast for the ages then Ged’s quick solo bass lines and you can do nothing but get a wide grin.

Just as we catch our breathe the swirling opening of 2112 comes from the vast outer spaces much to the delight of the audience. The band perform a slightly truncated version of the song, they do not play V.Oracle: The Dream (they would not until 1996 Test For Echo tour) and there is a cut in the action from 4:50 – 5:17, again the Frankfurt SB is used and the transition is seamless. The song has lost nothing in the two years since its inception, in fact the playing and use of technology just accentuates it. III. Discovery is melancholy in its simplicity and beauty with sounds of running water as Alex strums the acoustic with a certain innocence. The judgement of IV. Presentation sound almost bombastic as the Elder judge without mercy, destroying the dream. Alex’s solo during the movement is excellent, he lets loose on his wah pedal that seems to express all the anger and strife of the story. The visuals must be something as you can hear the audience react during VI. Soliloquy and the music masterpiece draws to a close with an exciting VIII. Grand Finale with “We Have Assumed Control” echoing over the cheers.

The encores begin with Working Man, a song that gets a huge cheer from the crowd, the classic is a crowd pleaser for sure but it is the frenzied riff of Bastille Day that rips my head off in metallic bliss. The good time feel of In The Mood follows, while not one of the band’s more cerebral songs it certainly makes for a great encore that gets the crowd on its feet. Great concert…but wait we seem to have forgotten something. What most people look forward too in every Rush concert…Neil’s Drum Solo. Introduced as “The lovely Professor on the drum kit” he takes hold of the audience who cheer him on and he gives a lesson is structured rhythm as he moves through many themes both old and current. A Working Man reprise ends the show and we get a bit of ambient outro music amid one punters who wants to go listen to his Led Zeppelin album. Great concert and recording, nice to see it getting its due on this release.

The packaging is full color inserts wonderfully adorned with official style and era graphics and looks like a companion piece to Hemispheres In Frankfurt (Cygnus 019/020), the live shots that adorn the cover and tray liner are excellent and accent the excitement of the music. The cd’s have pictures on them and there is the highly collectable sticker all housed in a slim lined jewel case. Excellent presentation of this material and a just as equally excellent release from Cygnus, lets hope they continue with more Rush releases, there is so much to choose and offer from this legendary act.
Posted by Zen Archer at 10:54:00 PM