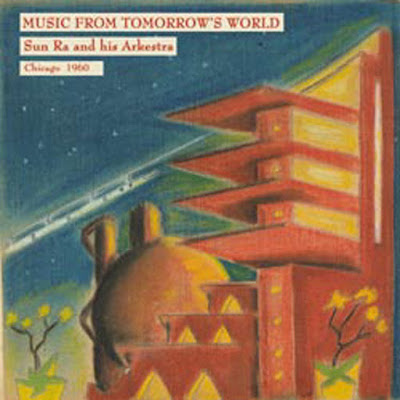 Notes:
Appeared on 2002, this material was previously unreleased.

Music From Tomorrow's World is a fascinating document and a boon to Sun Ra collectors. It gathers previously unheard tapes from two sources: one from the Wonder Inn club and one from Majestic Hall, probably a rehearsal. Both were recorded in 1960, toward the end of the Arkestra's Chicago period. The Wonder Inn tape is especially revealing, as it presents the Arkestra in front of a crowd. And although Saturn album releases from the period feature Ra compositions almost exclusively, this set shows they played standards as well during their live shows. The sound is surprisingly good, although one wishes the woman near the tape recorder would shut up once in a while. (Her comments range from "You gonna take me to eat?" to "Play it, Sun Ray! Play it like you want!") The first two tunes feature flutes heavily, then John Gilmore takes over the show starting with "Space Aura." Ricky Murray croons up a storm on the Gershwin standard "S Wonderful," with great Arkestra backing vocals on both Gershwin tunes. Ra's arrangement of "It Ain't Necessarily So" is quite interesting, and his arrangement of "China Gate" was clearly the inspiration for his own "Overtones of China" on the album Visits Planet Earth. The sound on the Majestic Hall session is not nearly as good, but the music surely is. This set has the Arkestra concentrating on original compositions, except for Harry Revel's "Possession" (another composer fascinated by space in the '50s). Gilmore is, again, in fine form, and there is the added bonus of four tracks that have not been otherwise recorded or identified. Music From Tomorrow's World is a fantastic document that casts some new light on an important period of the Arkestra's career. This was when it all came together for this one-of-a-kind band: the music, the costumes, the cosmology, and overall presentation. Shortly after, the Arkestra would leave Chicago for good. The Delmark albums and Evidence reissues of Saturn albums from the period would be the first stopping place for the Sun Ra novice, but Music From Tomorrow's World is highly recommended for fans of this important early portion of the Arkestra's history.
All of the material on Music From Tomorrow's World, recorded by Sun Ra in Chicago in 1960, is brand new to wax. The first half of the disc, Live At The Wonder Inn , begins with three Ra compositions, the first two featuring the lovely flutes of Marshall Allen and George Hudson (uncredited) over a tranquil, forward moving groove. As one might expect, John Gilmore is present and his fans should be thrilled with his engaging solo on “Space Aura” and his bop-inspired lines of the fast-paced chestnut, “How High The Moon.” The band lends its group vocal talents to the Gershwins' “'S Wonderful” and “It Ain’t Necessarily So,” both featuring, yes, more Gilmore flights. While the sextet sounds a bit ragged at times and one audience member near the microphone feels the need to engage a running commentary with anyone who will listen, the disc is a vivid document of the era.
The Majestic Hall Session, comprising the second half of the disc, is even more obscure. Apparently culled from a rehearsal tape, the focus here is on Ra originals, particularly four unknowns (“Majestic 1-4”) as well as his octet arrangements. While John Gilmore leads the way here as well, the highlight is the presence of baritone saxophonist Ronald Wilson, who contributes both excellent solo statements and solid ensemble work. The beautiful ballad “Majestic 1,” for instance, provides Wilson with plenty of room for his melodicism. The third track, “Possession,” follows a similar stylistic approach and features a gorgeous Gilmore solo, while Wilson adds striking originality to both “Tapestry From An Asteroid” and the swinging “Majestic 2.”

Perhaps the strongest track of the session is the tightly arranged “Majestic 4,” featuring the solo voices of cornetist Phil Cohran, Gilmore and Wilson, as well as the energetically propulsive drumming of Robert Barry. As a parting note, the potential listener should know that the entire disc has pretty awful sound. However, once one’s ears adjust, the magnificent performances make up for the lapse in fidelity.

Arkeology
It's wonderful, it's marvellous... but it is most definitely lo-fi!

I was attracted to buy this release as I was looking for clues as to the development of the repertoire of the band (from 'typical' Chicago period to the eventual later noise-fests), as well as the development of Marshall Allen and John Gilmore's approaches to their instruments.

I wasn't disappointed on either count. Space Aura is pretty blistering and for 1960 very cacophonous. Gilmore's tenor sax solo on this and on the full speed ahead version of How High The Moon are far removed from anything I've heard from the studio recordings leading up to this date (circa October 1960). We are definitely heading into Eric Dolphy and John Coltrane territory now. What's interesting, though - is that the audience seem to react very favourably to this stuff.

The second half of the album (from 'Majestic 1' which is actually a piece entitled Delilah onwards) suffers from sound quality that sounds like the Arkestra are playing in some distant kitchen, but is well worth checking out for the unreleased Ra compositions - especially Majestics 2 and 4 - but the approach is much more swing based. Ra's music is about both sides of the coin for me, so I don't have a problem with this, especially when you get to hear some lovely solos from temporary baritone sax man Ronald Wilson.
Posted by Zen Archer at 5:33:00 PM 2 comments: Links to this post