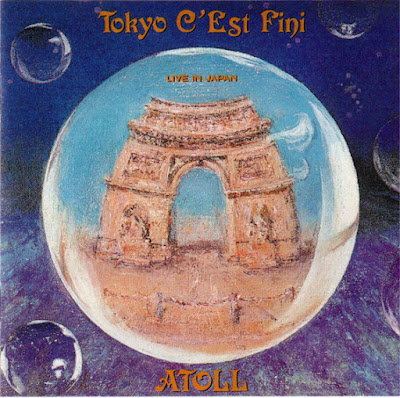 Work released in 1994 "Tokyo C'Est Fini". It is a live board of new ATOLL that Christian Beya formed in 1989. At that time, I saw live of them in Tokyo. Because alternatively to mediocre vocal, and the tune of latest album "L'Ocean" was the main It differed from my image, and I felt it like hard rock. I was impressed that it was a fine performance extremely the last "Paris C'Est Fini" however. The member of ATOLL was completely changed excluding guitarist's Christian Beya. His performance power progresses considerably, and remembers the performance not caught in a past glory being listened to be made.If vocal is excluded, it is a brilliant performance.

Four songs out of eight come from their weak album "L'Océan" (one star in my rating, but I was maybe too harsh). Since it was the supporting tour I guess it's all but normal. One track is a "Drum & bass solo"... I'm afraid that the worse is ahead of me...
The sound recording is very good. Since this album comes from some Japanese concerts, there are of course no interaction with the audience and the work here is closer to a "studio live" album than anything else (which is fine with me in the case of "Atoll"). Only the encore "Paris, C' Est Fini" features some audience "assistance".

Don't be over-enthusiast when reading the track list. Even if the great "L'Aragnée Mal" is featured; it is reduced to a mere 4'15". This is extremely annoying of course.

New songs like "L'Océan" and "Lune Noire" sound a bit better live. The latter will be seriously extended. The intro only is longer than the whole studio track. But no harm is done : complex guitar work and a solid rhythmic is more than welcome. The great guitar work from Christian Beya, as usual, will raise the level of some of these numbers. But there is nothing to do with the funky "Quelque Part". Poor it was, poor it remains. Just like "L'amour N' A Pas De Drapeau".

"Tunnel" is a solid rock number (but this was the style of their album ..."Rock Puzzle"). The studio track was a long piece of almost forteen minutes (part one & two). It is cut by three minutes here and it features high technicity of course; it sounds fully Crimsonesque in this live version. Tortured, complex but fresh and strong. This is of course the best song featured on this live album. Part two is really great with the rageous guitar again.

While I usually like drum soli (and this one is quite good I must reckon) a bass solo has very rarely overwhelmed me (except maybe one Entwistle one I remember while attending a "Who" concert in the nineties). Fortunately, this one is short as far as the pure bass is concerned and quickly turns into a strong bass / drum duo. But these type of work is good while you attend a concert and recording these are probably not in the "Mood of the Day" any longer.

The closing number is rocking furiously, almost hard-rock should I say. Fabulous guitar work... but this is no surprise any longer. Beya really dominates Atoll's work. 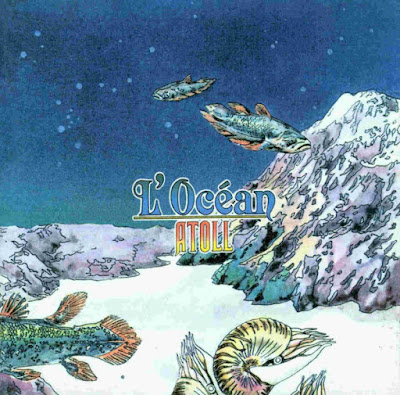 Atoll is a part of big groups in the French progressive landscape of the years ' 80. Initially taken out in 1989, " L'océan " is a very beautiful album of progressive pop / rock which deserves that we lend it an ear.

Titles such as L'Océan", "Quelque Part" or "Coup de Coeur", if they've a little aged about sounds, they remain not less very delicious in the listening there. We can also find of very beautiful instrumental as "Sahara", splendidly interpreted in the classic guitar, or "Odyssée", more rock in the spirit, but always making the beautiful part for guitars.

We'll underline the excellent quality of the vocals, it is clear, just, well mixed. Tracks follow each other while showing the same degree of quality. The last song perfectly ends this album An excellent band, highly recommended.
Posted by Zen Archer at 12:51:00 AM 1 comment: Links to this post 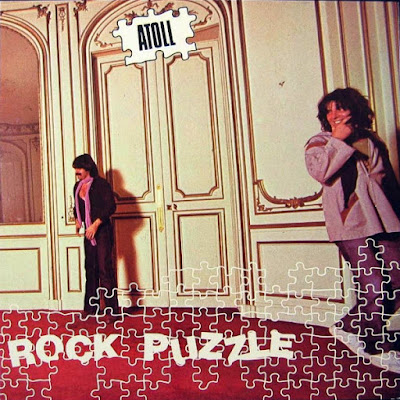 Atoll is an amazing band. I guess that it is the only one to bring me so frequently from heaven down to earth (or even hell) and back again to heaven. This feeling is fully present during the opening number "L' Âge D'Or". Rocking with average success it will turn out fully symphonic and brilliant. Rather strange.
Actually, I already made this comment in my review of their third album "Tertio" : at this stage of their career, "Atoll" preceeds "Ange" by a year or two. Almost pure French rock with "L'Ultime Rock" : it sounds all but normal, right ? "Ange" will also go in this direction with the album "Vu D'un Chien" (released in 1980 and pretty weak).

"Atoll" will also produce some pure symphonic tracks here, as "Kaelka". Gorgeous keyboards and somptuous guitar are fabulous. It is of course not an essential song in their repertoire but still a very pleasant prog moment. What else can we ask ? Another symphonic but simple song ? You'll get it with "La Maison de Men-Taa".

A song like "Smarto Kitchy" is again fully rock-oriented : incredible rhythm and great guitar. Very funny mood : truely festive. When you listen to this one, you know where a band like "Rita Mitsouko" (another French band) found their inspiration for "Marcia Baila" (a great song released in ... 1984). It is true that it sounds a bit disco; but the hypnotic rhythm is just superb. This song has of course nothing to do with the classic "Atoll" repertoire (but do they really have a classic repertoire ?). I like it very much, but be open-minded while listening to it...I see it as a highlight, but I understand that most of the progheads just won't be able to listen to this song in its entirety (eight minutes).

"Eau" is again a very pleasant symphonic track. Nice acoustic guitar and grandiose keyboards to support André Balzer on the lead vocals. Guitar is just fantastic. Another highlight. Followed by one of the weakest number of this album : "Garces De Femmes". An uninspired rock song only saved by a wonderful work from Christian Beya (but he is really outstanding throughout this release).

The closing number is fully in-line with the album. Great rock music and superb guitar + keyboards again. A nice piece to finish the puzzle.
Posted by Zen Archer at 12:32:00 AM 1 comment: Links to this post 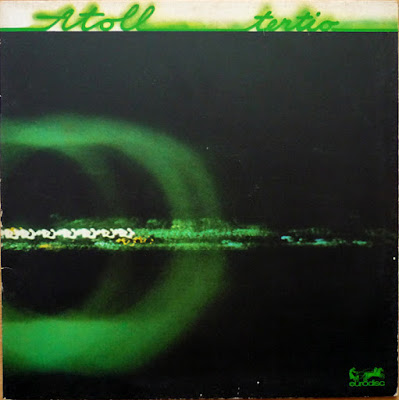 After the majesty of L'ARAIGNEE-MAL, pretty much anything that followed it couldn't be perceived as anything but a letdown. It's rather surprising, then, that TERTIO is as good as it is.
Without Aubert or Gehin to fill out the sound, it relies on Taillet to pick up the slack. To be fair, he has enriched his sounds some. He still uses the Solina and the Clavinet as his main axes so to speak, but he pushes as far as his sounds will let him.

Fortunately, the compositions are strong enough to make the sounds (almost) beside the point. "Paris, C'est Fini" opens the album on an authoritative note and the lengthy, two-part "Tunnel" has a sound and feel quite similar to the fantastic "L'Araignée-Mal" suite. Definitely your next best-bet as far as Atoll albums go.

The second of ATOLL's two classic albums (after "L'Araignée-Mal" in 1975) is musically less interesting than its predecessor, but more immediately accessible to anyone able to recognize the obvious role models. This was a band that spent most of its abbreviated life span looking for an identity to call its own, and here they finally nailed it, after what must have been a serious overexposure to the music of YES.
I don't mean to suggest that, like so many other copycat bands, they sound just like YES: they don't (even if some of guitarist Christian Beya's riffs are unmistakably Steve Howe inspired). But all the subtle shades of fusion that so effectively colored the previous album have been jettisoned here in favor of a stronger, more confident symphonic rock sound that clearly owes a stylistic debt to the English Prog pioneers without in any way sounding like a plagiarism.

If anything the group had more in common with ANGE, their compatriots on the Gallic Prog scene and always one step ahead of ATOLL in sales and acclaim. Christian Beya was even asked to join ANGE around the time this album was in the pipeline, but declined what must have seemed an almost irresistible invitation to fame and fortune out of loyalty to his own struggling band mates.

And ATOLL singer Andre Balzer shares with Christian Decamps a similar urge toward verbal histrionics. But where the ANGE vocalist is often compared (not altogether reasonably) to PETER GABRIEL, Balzer is more a cross-channel analog of PETER HAMMILL, in the way his voice is able to shift from sultry croon to satanic croak in the span of a single melody.

Gone is violinist Richard Aubert, but the remaining quintet of players (in the traditional line-up of guitar, drums, bass, keyboards, and vocals) is more focused here, from the first, circular chords of the catchy opening track "Paris, C'est Fini" to the mock- Gregorian chant fade-out of the epic, two-part, fourteen minute "Tunnel" (fourteen of the most exciting minutes in any Prog library, I might add).

The only song that doesn't really work is "Gae Lowe (the Duel)", not coincidentally also the shortest track on the album. The best Progressive music is always able to blend conflicting ideas into a cohesive whole, but instead of having a natural flow this sounds more like a K-Tel medley of rejected outtakes.

Elsewhere, the ethereal backing vocals are provided by Lisa Deluxe and Stella Vander of MAGMA, showing that ATOLL was certainly mixing with the right company. But it's too bad they were such late bloomers: by the time the band had mastered the classic symphonic style (this album was released in 1977) the party was just about over.

I can't really call it essential listening, if only because there's little here that hadn't already been done elsewhere (and because the Musea CD adds no bonus tracks to the original album's skimpy 37-minute running time).

But let's put it in perspective: over their entire career ATOLL may have only produced two really strong albums, but that's two out of a total of four studio albums altogether, a batting average most bands would be proud of.