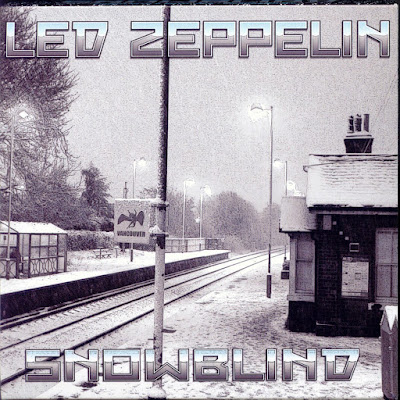 The final two weeks of March, 1975 represent offer some of the heaviest Led Zeppelin concerts on record.  Not only do the shows from the Pacific Northwest and Los Angeles all push three and half hours, but they all have interesting variations and improvisations unique to these performances.

About once or twice a year a new soundboard recording from Led Zeppelin’s mid-career tours surfaces.  Last summer the March 17th, 1975 Seattle show surfaced on Haven’t We Met Somewhere Before? (Eelgrass EGL-20241/42/43) and was very enjoyable.  Snowblind, the latest soundboard to come out, documents the marathon Vancouver show on March 20th.

Like the other tapes from this week, Snowblind is an excellent and very enjoyable soundboard recording.  In general it is well balanced between the instruments, but it is nice for emphasizing the rhythm section.

These two shows were almost cancelled because of a strike by radio station CKLG-FM.  The press reported that “CUPE local 1004 (Canadian Union of Public Employees) at the PNE and two other unions involved would have boycotted the concert if CUPE local 686, representing the CKLG strikers, had so wished. But CUPE spokesman Ole Johnson said the concert is ‘definitely on….We felt it was in the best public interest to allow the concert to be held,” he said, “We aren’t interested in hurting the over 20,000 people who have already bought tickets.”

Zeppelin were slagged in the press for this performance.  Don Stanley, reviewing the shows in the Vancouver Sun, begins his review by saying  “some groups are humbled and damaged by the Pacific Coliseum’s hockey rink vibes.  A Led Zeppelin show in enhanced.”  The proceeds to slag the music, saying it “is as impersonal as the faceless multitudes that disappear in the haze at the top of the blues, as ugly as the process of frisking girls at the turnstiles, or the rows of fat, competent bouncers before the stage.  Zeppelin fans include well-meaning critics who don’t want to lose touch with the masses, and intellectuals at parties who mouth words such as ‘atavistic.’  But I think it’s fair to say that the typical Zeppelin fan, the….is a teen-ager as much interested in the event as the music.”

“Musically, Led Zeppelin are all their fans could desire:  numbingly direct, loud enough to rattle the brain pan, and  mysterious, or at least portentous.

He then goes on to attack the band themselves.  He calls John Bonham’s solo “boredom refined to torture!”  Page’s weaknesses are “awkward transitions, which mar even the masterful ‘Stairway To Heaven,’ and of course the heavy handed approach which make Led Zeppelin record unnatural and forces.”  And ripping into Plant, he calls him a “poser, who holds on to the belt buckle of hi slow-slung jeans as though to prompt the fantasies of jaded groupies.”  John Paul Jones escapes his attack.  It is striking that even at the height of their popularity both Led Zeppelin and their fans were subject to such attacks in the press.

Despite the review, this is one of the better shows from the tour made even more enjoyable with this fantastic new recording.  The audience tape only hints at the prowess the band showed this night and the good times they had.

The tape picks up right at the beginning of “Rock And Roll” (the announcement of the “Canadian return of Led Zeppelin” is omitted), and after the segue into “Sick Again” Robert Plant rambles on a bit “amidst the perfect smells that are rising towards the stage, we’re gonna try and maintain coherence ourselves, while you, while you get stoned and stoned and stoned, unless it’s just my nose.”

“Over The Hills And Far Away” from Houses Of The Holy follows, sounding extremely fluent in the song’s improvised middle section.  This is one of the songs that really improved as the tour progressed from the disjointed versions in Chicago.

Page’s adventurous spirit can be heard in the following song “In My Time Of Dying.”  Although the arrangement of this piece normally remained the same from night to night, at about the seven minute mark Page throws in a reference to a tune who wrote in 1970 titled “Flashing Lights” which appeared on the Lord Such And Heavy Friends album.  He also throws in a short reference to the unreleased “Jennings Farm Blues” here as he does in the “Flashing Lights” studio recording.

The intensity of the performance seems to cause some commotion up front.  Plant addresses the “amateur wrestling in the audience” before mentioning roadie Benji Lefevre’s sickness and dedicating “The Song Remains The Same” to him.

Before they play “Kashmir,” their new epic from Physical Graffiti, Plant mentions the disastrous show in Vancouver on July 18th, 1973 (which could be heard on No Firecrackers (Electric Magic EMC-009A/B)).  “I think the last time we came here was about two years ago, eighteen months ago.  Was anybody here then? It was quite a peculiar show actually.  … Something strange happened to me that evening. I found the light show to be amazing, and I wondered what the name of the group was. So I should dedicate this to that state of mind. Long may it come at my moments of ease.”  The song almost falls about four minutes in, but they pull it together with Plant joking “wasted, wasted land … EVERYONE WASTED!”

“No Quarter” reaches twenty-five minutes this night.  Unlike other performances, Jones’ piano improvisation is both creative and purposeful.  He plays a gentle little melody pregnant with expectancy and hope before Bonham comes in with drums and Page on guitar.  Jones returns to that theme later in the song, after Page’s guitar solo leaves the audience devastated.

“Dazed And Confused” is the other epic marathon, reaching almost thirty-five full minutes.  Page favors a pastoral melodic tune before the “Woodstock” section, and the long improvisation is very intense.

The encores begin with the short reference to “Whole Lotta Love.”  In the ensuing improvisation Page plays the riff that he would later use for “Ozone Baby,” recorded in Stockholm in 1978 and released in 1982 on the final Led Zeppelin album Coda.  Page then plays the theremin, gets into some heavy-metal funk and leads the band into “Heartbreaker” (instead of the expected “Black Dog.”)  The rest of the band seem caught off guard by the change, but quickly get into it.