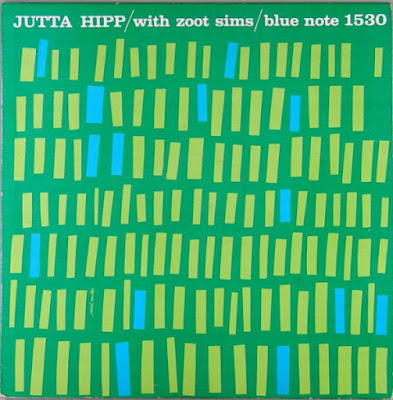 
The title is Jutta Hipp With Zoot Sims, but it should be the other way around.


No knock on Jutta Hipp. She's great—a lively, fluid pianist who really could have been a big player in the 1950s bop scene if she hadn't suddenly disappeared and dropped out, forever. This is her date—a 1956 recording with a wonderful hard bop quintet. And if she weren't totally overshadowed by Zoot Sims, listeners might say, "Wow, that's the album where she really broke out."

Except she really is overshadowed by Zoot Sims, who is a non-stop dynamo on every single track. He's one of those rare tenors who play equally well on speedy bop numbers and smoky ballads. It's not that Hipp isn't interesting; it's that Sims is more so. He dominates the album, partly because he takes the lead solo every time, and therefore sets the pace, and partly because he's a whirlwind of interesting sounds.

Hipp was a virtual unknown at the time, and a rarity—a German and a woman who could play bluesy piano like Horace Silver. Sims, by contrast, was famous from various big bands and as one of Woody Herman's "Four Brothers." They make an unlikely pair, but they play well together.

The album starts with a generic blues jam called, appropriately, "Just Blues." The credits say Sims wrote this, but it sounds entirely improvised to me—like one of those Jazz at Philharmonic things, where everyone riffs on the same blues chords for 10 minutes. It's fun.

The CD continues with Sims on a smoldering version of the ballad "Violets for Your Furs." It says something that he's equally captivating on the blues and ballads. An upbeat bop number called "Down Home" follows, and then, two cuts later, a wonderful take on "Wee Dot," the ultimate hard bop tune recorded definitively by the The Jazz Messengers only two years earlier. The Hipp-Sims version won't make you forget Art Blakey and Clifford Brown, but it's marvelous in its own way.

The only down side? The weak performance of trumpeter Jerry Lloyd. He tries so hard to keep up and doesn't even come close. On the solos, he spits out short phrases, stops, tries again, stops, and never quite gets it. And he's so low in the mix that you wonder if he was playing in the back of the room or if Rudy Van Gelder forgot to give him a mic.

The CD ends with a fast romp on the George Gershwin classic "'S Wonderful." It's a joyous rendition, so I feel guilty complaining that I can't hear the original melody anywhere. I guess they're playing on the Gershwin chords, but I wouldn't want to vouch for it. Still, much fun.

Anyway, get this CD. I don't know if it's Zoot Sims best ever, but I can't imagine there are many better than this.
Posted by Zen Archer at 6:18:00 PM 1 comment: Links to this post 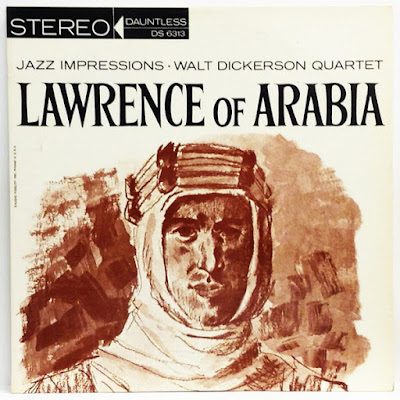 
Once in a while it's nice to listen to a different take on a familiar score. Here's one we're very familiar with, as it's a favorite, but we've never heard it like this before. This was a big deal movie with a famous score. Jack Marshall & Shelly Manne covered the theme, as did The Ventures. The Walt Dickerson Quartet, with the killer rhythm section of Henry Grimes and Andrew Cyrille plus Austin Crow on piano, fo a swinging take on it after two different intros, one in a middle eastern style and another in a loungey Martin Denny sort of style. (Who is Austin Crow?)

Grimes anchors "This Is the Desert" with a looping bass figure that provides a hypnotic environment for the rest of the band to solo.

Then there's a two-part "Motif from Overture", the first part being a waltz run through a suggestion of Jarre's opening music for the film and the second being more free. This is really almost a unique record in its combination of material and execution and everybody's playing is amazing.

"Arrival at Auda's Camp" is immediately familiar though with such different instrumentation and feel that you might do a double take to reconcile the recognizable theme with his up-tempo jazz rendition.

After that comes another two-part piece, "Nefud Mirage". The first part is a strong and energetic modern jazz workout while the second half, is much more spacious and atmospheric, even balladic in places.

The record concludes with "The Voice of the Guns", kicked off with some machine-gun snare playing by Cyrille and with impressive bass work by Grimes throughout.

This quartet is just fantastic and it's a thrill to hear them do something like this! 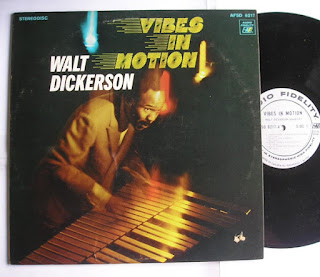 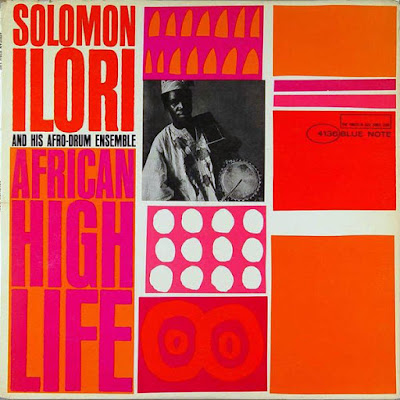 The Nigerian-born Ilori arrived in the US in the late '50s and recorded the first six tracks on this album—the original African High Life release—in 1963. They're pleasant, if unspectacular, palm-wine highlife outings from the West African tradition, distinguished by some masterful drumming, but diminished by strangely inept alto saxophone contributions. (Saxophonist Hosea Taylor is more convincing on flute, but even here, he's eclipsed by Ilori's pennywhistle, winningly showcased on the Irish sea shanty-derived "Follow Me To Africa.")

The separation between the drums isn't great on the recording, and there's too much tinny top on the call and response vocals—but traditional West African music wasn't engineer Rudy Van Gelder's main area of expertise, and recording technology in the early 1960s wasn't what it is today. By the time the final three tracks here were recorded, Van Gelder had it down more sympathetically.

Each of these three tunes runs approximately thirteen minutes and includes extended horn, traps and African drum solos. Elvin Jones' thrilling and uplifting interaction with the drum choir of Ilori, Chief Bey, Roger Sanders, Ladji Camara and Sonny Morgan is a feature of the mid-tempo groove of "Gbogbo Omo Ibilie" and the hotter and more intense "Agbamurero." Their dialogue continues on the cool-down closing tune, "Igbesi Aiye," which gets into some fine cross-rhythmic work.

Donald Byrd (trumpet) and Hubert Laws (tenor saxophone and flute) both contribute convincing modal solos to each tune, giving a taste of the aesthetic Pharoah Sanders and Alice Coltrane would develop later in the decade.

Ilori went on to work Harry Belafonte, Miriam Makeba and Hugh Masekela. It's taken forty years to release these latest tracks, but they're resoundingly well worth the wait.

One of Blue Note's less typical releases and a real suprise that is now thankfully available again thanks to the superb Connoisseur Series.While a very strange release in that it is by an African drummer playing High-life with hints of jazz,a little digging suggests it is not completely out of character.Blue Note had released a number of cross-cultural drum based LP's via Art Blakey.These however explored the link between Latin and Jazz rhythms.What also makes this reissue so special is the inclusion of three extra tracks that came from a different session and have never seen the light of day before.Normally I am against such measures and am often driven to distraction by inclusion of endless alternate takes that seem to mar the RVG series.The CD however always seem to delve that bit deeper and bring new gems to the table.In this case the three extra tracks make the CD essential.While the original LP is a fine example of jazzy high life featuring some inspired drumming and vocal chanting it is these extra tracks that stand out.They also feature some well known faces unlike the original line up.There is Donald Byrd,Elvin Jones & Bob Cranshaw adding a heavy jazz feel to the superb drum work of Ilori and his friends.The tracks consist of three long pieces that blend heavy modal passages of playing with the driving drum patterns of the high-life genre.The results are wonderful and makes for some great summer music.It was this sort of experimentation and forward thinking (remember this came out in 1963) that made Blue Note such a huge influence in shaping modern music as it is today.
Posted by Zen Archer at 5:12:00 PM 1 comment: Links to this post 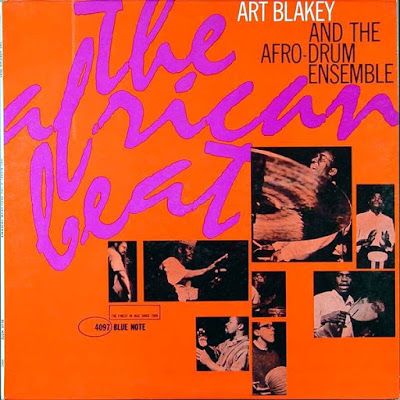 Bridging cultures, Art Blakey combined powerful African rhythms and American jazz melodies on a session that Blue Note reissued recently because the album explores roots common to all of jazz. Blakey’s ensemble for this 1962 project included artists from both worlds: Solomon G. Ilori and James Ola. Folami are from Nigeria, Chief Bey is from Senegal, and Montego Joe is from Jamaica.

Man, does Art Blakey play loud on this session! Gentle melodic instruments are served with severe punctuation as Blakey attempts to add his drum set in contrast to the more natural sounds. Strong bass work from Ahmed Abdul-Malik holds it all together. Native drums and smaller percussion instruments set up hypnotic rhythms that form a seamless foundation. Yusef Lateef provides aural images of Northern African dancing women on "Obirin African" through an exotic flute arrangement. "Ayiko, Ayiko" serves to demonstrate a thorough combination of the two cultures as Lateef pours out spirited tenor saxophone jive alongside a relaxed folksong tune. The longest piece on the album, "Love, the Mystery of," places oboe in the featured role in front of various chants, hypnotic percussion and a strong syncopated bass. Art Blakey brought together an ideal membership for his searching project, but laid it on much too harshly each time he decided to add his own drum kit participation.

In the late 1950s and early 1960s, Art Blakey's fascination with drums went beyond his own playing behind the vaunted Jazz Messengers. He began enlisting multiple drummers, first to chair the Messengers with him (as on the fantastic Drums Around the Corner) and then as stand-alone ensemble like the one that plays on The African Beat. Blakey's nine-drummer wall of rhythm is fronted by Yusef Lateef on horns--and occasionally percussion--and bassist Ahmed Abdul-Malik. They play tunes that stand on thick carpets of cymbals, congas, log drums, maracas, and more. As a result, they produce massive soundscapes with floating horn lines over the top, something that conjures Egypt and Manhattan at once. The only downers with the session are the fade-outs that close off the rich dialogues happening across continents, but these come after such a wealth of melody and energy that it's easily forgivable. And while Blakey could easily have powered this band to ungodly speeds, he keeps things midtempo so that everyone is locked into a groove and moves as a magical unit.
Posted by Zen Archer at 4:46:00 PM 1 comment: Links to this post