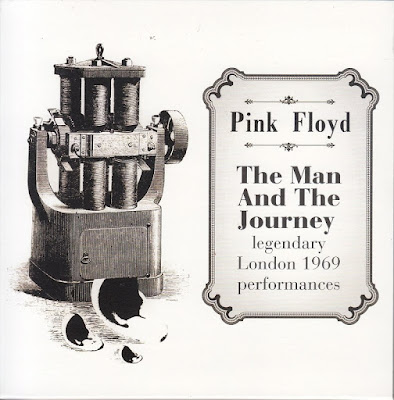 
In early 1969 there started to be a major shift in the Pink Floyd’s live performances, gone were the psychedelic free from dance raves, now the band was starting to be embraced by a more intellectual crowd, one that would want to quietly listen to the music and the band’s ability to not only recreate the music on their records, but expand upon it, yes it was the early days of what would become Progressive rock. So instead of investing is lighting and projectors, the band would Cutie their wages by investing in their sound system, the early culmination of the investment was certainly the Azimuth Coordinator, a 360 degree surround sound system. To showcase the new direction, the group would take existing material and present it in a way that would also include a bit of their theatrical influences also, the music would form two long form pieces of music, the individual songs would become movements of the main themes. These early explorations were given names, the first half would be referred to as “The Man” with a running theme of a persons routine in a daily time span. The second half would be called “The Journey”, a theme that could be more open to interpretation of an inner mind to possibly a theological journey. This early experiment would be the group’s first sojourn into a conceptual piece of music and be the foundation for much of the output of the following decade.

Disc 2 (59:24) The Journey: The Beginning, Beset By Creatures Of The Deep, The Narrow Way (Part 3), The Pink Jungle, The Labyrinths Of Auximenes, Behold The Temple Of Light, The End Of The Beginning. Encore: Interstellar Overdrive. Bonus Track: Nightmare / Daybreak (Part 2)

Billed as “The Massed Gadgets Of Auximenes – More Furious Madness From Pink Floyd”, the London debut of The Man And The Journey would be performed at the 2,500 seat Royal Festival Hall, quite a feet considering the group was banned from the venue a couple years prior. With the revolutionary sound system still in its early stages, the aftermath of the performance left the group a bit disappointed and while press reviews were mainly positive, most thought of it as a good rehearsal. What the performance did was to give confidence to the group and to promoters that they were a group worth promoting, and certainly the group could stay the course of musical vision.

There are two tape sources for this performance, the first is from Anthony Stern, who was asked to film the entire performance yet did not go through the correct channels and was only able to film the groups rehearsals the day of the event. The 25 minute documentary is the source of the first part of this set. The recording is excellent, clear and detailed yet very fragmentary. You do hear some snippets of dialog and you can get the sense that Roger Waters is certainly the one in charge and giving much direction. It should be noted that the video does circulate in trading circles and is a fascinating piece of Celluloid Pink Floyd history.

The second recording is an audience source of the complete concert. It is a fair to good yet distant recording, the press on this title claim it is from a new tape transfer. This concert was previously circulated on two main titles, first is The Massed Gadgets Of Auximenes (Highland HL 282) a title that has eluded me for some time, so my only previous copy of this show was on CD-R as The Massed Gadgets Of Auximenes (Harvested CDR 009). When compared to the Harvested release this new release has a layer of hiss not found on the Harvested title, it is most notable at the beginning of the concert, Daybreak (part 1) is Grantchester Meadows and is performed acoustically making it difficult to hear and enjoy the song. Much of this early performance of The Man is improvised instrumental pieces, save for Daybreak and Sleep and at times can be a challenging listening experience, yet once one finds a quiet time, for me at night when the bustle of the day is over, I found myself picking up detail I did not hear during the day.

The second half performance of The Journey is much more concise as it contains more structured pieces of music. The early pairing of Green Is The Colour > Careful With That Axe Eugene aka The Beginning > Beset By Creatures Of The Deep is nice, the early versions of Eugene / Beset have a fast pace to them quite different than the versions that will evolve over the next few years. The Pink Jungle sounds very interesting, like a bubbling soundscape and one of the few themes to have carried over from the Syd era of the Floyd. The group get a nice ovation after The Journey is complete, some punter screams out “Interstellar Overdrive”, his cries will be rewarded as that is the nights encore after which another loud ovation and in true Floyd fashion the last thing you here on the tape is a “Wow”, very fitting. There is a bonus track, Nightmare / Daybreak in much better quality, the source is again from the Anthony Stern tape and even though he was not allowed to film the band he did anyway and this is all that exists of the evening performance as he was discovered and promptly kicked out!

Disc 4 (56:38) The Journey: The Beginning, Beset By Creatures Of The Deep, The Narrow Way (Part 3), The Pink Jungle, The Labyrinths Of Auximenes, Behold The Temple Of Light, The End Of The Beginning. Encore: Set The Controls For The Heart Of The Sun

After the London premier at the Royal Festival Hall in April, the Floyd would play various gigs around the UK, a few were recorded for their next record, the half live half studio Ummagumma plus some sporadic festival appearances. The group would return to London to play the prestigious Royal Albert Hall in June 1969, a concert billed as “The Final Lunacy”. For the occasion they would be joined by the brass section of the Royal Philharmonic and The Ladies Of The Ealing Central Amateur Choir for the ending of The Journey. There is one tape source for this concert, sadly incomplete missing Daybreak (part 1), and Work. The audience recording is a solid good just a bit distant with very little hiss and was recorded by a chap named Bernard, who captured the event nicely. The best that circulates is a 1st Gen, and this version found on this new release sounds like that version of the tape.

Being more clear and detailed than the April performance, the band’s playing during this concert is also more confident and have played it several times, there is a level of comfort as well. Sleep is a variation of Quicksilver from the More soundtrack, the breathing over the lush soundscape is particularly enjoyable, Nightmare is not an instrumental piece as found on the earlier performance but is now Cymbaline, again from More with an intense middle section.

The End Of The Beginning aka Celestial Voices from A Saucerful Of Secrets is very long, Richard Wright starts on the Halls massive pipe organ sounding quite majestic, the Philharmonic Brass comes in a bit awkwardly but get it together quickly but when the women’s Choir comes in it is really very nice, they add a spiritually epic feel to the piece. One listen and you can almost here the origins of Atom Heart Mother, I am sure this had a major influence on the band. An excellent version of Set The Controls For The Heart Of The Sun finishes off the evenings festivities and reportedly a Pink smoke bomb was let off, infuriating the Hall management who reportedly banned the Floyd! An excellent end to a piece of Pink Floyd history.

The packaging for this title is incredible, the typical mini LP sleeve with four mini sleeves for each CD, the pictures on each tie in with each other, the 8 page booklet is adorned with Relics style illustrations as well as liner notes from The Lazy Goalkeeper, it also includes a breakdown of each piece of both suites. The CD’s also have pictures on them, of 60’s era Marvel Comics mixed in with The Man And Journey graphics. For Floyd collectors, like myself, this release is like a wet dream. Excellent packaging and very relevant material that fills a gap in my collection as I have precious few documents from 1969, perhaps other labels should take notice of a release like this. So far I am blown away by the Eat A Peach Floyd titles and cannot wait to see what they do next.
Posted by Zen Archer at 6:47:00 PM