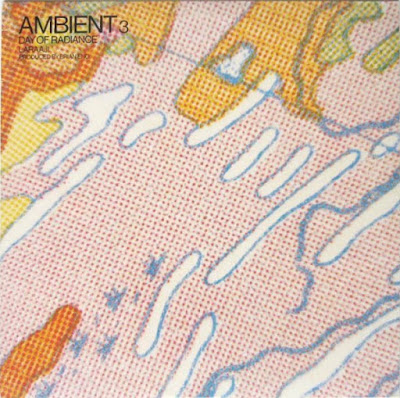 Serendipity was in full effect the day Brian Eno strolled through New York’s Washington Square Park and came across Laraaji playing his plangently chiming autoharp, and dropped a note in his busker’s hat inviting him to make a record. Born Edward Larry Gordon, the actor-musician Laraaji had already released one album, 1978’s Celestial Vibration, and explored the concept of cosmic music for some years using electrified and adapted versions of the zither and hammered dulcimer. He believed that these and similar metallophonic instruments like gongs induce a trance state that breaks down the self’s boundaries and loosens the bonds of time.

Not that the first side of Day of Radiance is relaxing, exactly: “The Dance” seems to flood your mind with almost-painful brightness. But the flipside’s two-parter “Meditation” gently unspools folds of glimmering texture in a slow-motion cascade. Although Radiance was a career highpoint and reached his broadest audience, Laraaji would record many more wonderful albums (including Flow Goes the Universe, for Eno’s latterday label All Saints). The fact that Laraaji’s other main occupation is working as a laughter therapist reminds us of the higher purpose—at once practical and mystical—behind Radiance. This is music for healing and making whole. –Simon Reynolds


Edward Larry Gordon was a comedian/musician attempting to work his way through the Greenwich Village clubs in the '70s when one day he impulsively traded in his guitar for a zither, adopted the name Laraaji, and began busking on the sidewalks. Brian Eno, living in New York at the time, heard his music and offered to record him, resulting in this singular, unusual album. Laraaji uses an open-tuned instrument with some degree of electrification (and, presumably, with studio enhancements courtesy of Eno), which creates a brilliant, full sound. The first three pieces, "The Dance, Nos. 1-3," are rhythmically charged and propulsive, with tinges of Irish hammered dulcimer music mixed with a dash of Arabic influence. The layered production gives them a hypnotically captivating quality and an echoing vastness, inducing a dreamlike state in which the listener happily bathes. The two parts of "Meditation" are arrhythmic, ethereal wanderings, still effective if less immediately riveting. Day of Radiance is considered an early new age masterpiece and, while it shares certain aspects with the genre (including a heady mystical aura), it has far more rigor, inventiveness, and sheer joy of playing than the great majority of its supposed descendants. It possesses a sense of timelessness that has enabled it to quite ably hold up over the years.
Posted by Zen Archer at 9:54:00 AM