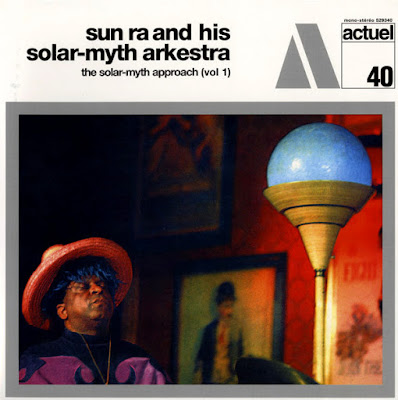 A collection of all-out free improv avant-garde takes from the late 1960s/early -70s by the mightiest of moogy space nuts, but it’s not as inaccessible as you might think. Sun Ra dabbles in moog synthezisers for the most part, with some tracks being almost purely solo fumbling with manipulated, woozy and muffled keyboard sound, but there are some combo pieces where the arkestra either does ensemble free improv work in the B-movie-Egyptian „exotica“ free jazz style while Sun Ra reacts to them with tentative, full clusters (and disappears here and there completely) or erratic „solos“. Here and there they all fall into compositions with chorus and melody with an occult group chant („The Satellites Are Spinning“), but it almost seems like an accident, induced by collective trance. „They’ll Come Back“ is a classic little combo piece with a ‚normal‘ instrumenation in Sun Ra’s shamanized post-bop style.

Overall, this is extremely sketchy, but quite appealing as it is the kind of free improv that doesn’t bash you over the head with dissonance and noise but the kind that develops a trance-like, soothing atmosphere after you stop worrying about procedure and relevance – maybe while you float through your living room in a cup of green tea. Available as a twofer with its follow-up selection on The Solar-Myth Approach Volume 1 & 2.

One of Sun Ra's more experimental sets (and that's saying something), 1970's The Solar-Myth Approach, Vol. 1 is an eclectic set of tapes from sessions that date back to 1967 and include some of Sun Ra's earliest experiments with Moog synthesizers (the clatteringly primitive solo "Scene III, Took 4" sounds like it could have come from the very first time he experimented with the machine) and evidence of his increasing interest in dissonance and repetition. For example, the opening "Spectrum" sets various horn and reed players against each other in such a fashion that they sound woozily out of tune, even though they're playing in the same key; like most of the rest of the album, this piece is built on the most minimal compositional skeleton, with little in the way of melodic development or counterpoint. The pieces are also recorded with typically eccentric instrument groupings; most of the ten-minute "Legend" is an extended duet for trombones, and only the rollicking "They'll Come Back" has a typical small-combo lineup. Those who are into Sun Ra's most non-traditional musical ideas should look no further.
Posted by Zen Archer at 3:10:00 AM