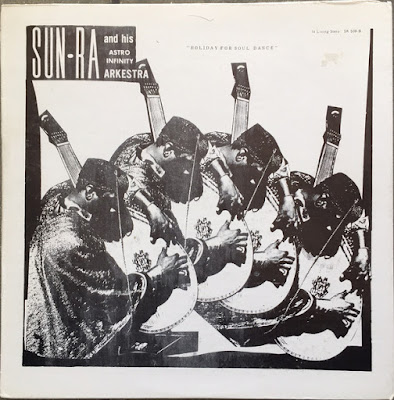 "Early Autumn" recorded at Wonder Inn, Chicago 1960.
The rest of the tracks were recorded at Elks Hall, Milwaukee June 14, 1960.

Note that the personnel on the cover is known to be incorrect (dating from the mid-to-late 60s Arkestra).

Holiday For Soul Dance is as close to the jazz mainstream as any Sun Ra album. A rarity in that it contains no original compositions by the leader, Holiday offers seven Tin Pan Alley standards (two by Gershwin), as well as a new work ("Dorothy's Dance") by Arkestra trumpeter Phil Cohran.

Compiled from recordings made in Chicago around July 1960, it was released on Saturn a decade later. The album title, in fact, was configured from words plucked from the track listing. The release was one of five to include songs captured in a marathon 1960 recording session at RCA Studios (and/or possibly Hall Recording) before Sunny's departure for New York. Like most of these delayed releases, Holiday for Soul Dance was less a planned album than a collection of songs that fit thematically.

The LP back cover lists 14 musicians, but in fact the personnel appears to consist of a tight septet of Arkestra mainstays, minus the larger rotating musical family. The song choices reflect a nightclub set, and affirm Sunny's enduring fondness for traditional bandstand repertoire. The Arkestra interprets these standards with respect and dignity, offering few hints of the pan-galactic notions swirling in the bandleader's mind at the time. Yet the arrangements—particularly on the uncharacteristically stringless "Holiday for Strings"—display Sun Ra's typically masterful craftsmanship. To the discerning ear, idiosyncrasies abound, yet Sunny refuses to sacrifice accessibility. Solos by the band's brass and reeds are tasteful and restrained, but charged with emotion as the compositions require. "I Loves You Porgy" and "Body and Soul" demonstrate Sun Ra's tender way with ballads, while the rest of the tunes swing—the juxtaposition of styles providing the "soul" and "dance" respectively. He even manages to namedrop himself in the final track.

"Early Autumn" features the robust baritone vocals of Ricky Murray, who later made an encore cameo on The Futuristic Sounds of Sun Ra (Savoy, 1961), singing the standard "China Gate."

There’s much beauty to be found in this collection of jazz standards mostly performed in quartet and quintet settings, with the occasional septet.

John Gilmore’s tenor playing has started to enter new rhythmic territory, and he mostly seems to focus on the upper register of his instrument during his solos. Marshall Allen finally gets promoted to alto sax after mostly playing flute since joining the band in early ’58, and we get to hear his sometimes gentle, sometimes swooping approach for the first time, and he’s clearly got a lot to say.

Whilst most of this album is played straight there are some unusual touches, for example the re-structuring of the melody of ‘But Not For Me’, the horns introduction to ‘Day By Day’ and their arrangement on 'Early Autumn'. Personally I'm not really a fan of Ricky Murray's voice on that latter track, the only vocal track here, but it's a lovely album.