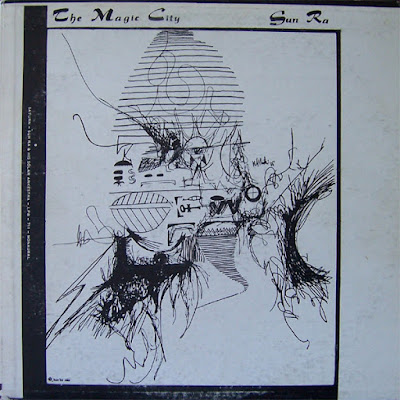 Sun Ra embodies many of the best and brightest aspects of the weird, the avant-garde, and the downright alien experimental jazz underground of the late 60s. Sun Ra effectively pushed the genre's boundaries and limitations more than any other jazz musicians could have ever hoped to. One would be hard-pressed to find a jazz musician with a catalog anywhere near as surreal, otherworldly, and varied as Sun Ra'sis. His music is characterized by the creation of otherworldly soundscapes. The focus of his music is pointed towards uncompromising improvisation and spontaneity. The Music found on this album (and many others) is predicated by his fusion of avant-garde compositional elements with freakish instrumental manipulation and improvisation. Philosophy also plays a key role in Ra's music. His music was essentially the birth of Afro-futurism. His artistic ethos was based on the readoption of technology, imagery, and genre norms from predominantly white. This idea has become the foundation of Afro-Futurism. Use his his Af his for Af for Af for Af for Af for. Afro-futurism, his his his his his for his for his for. Afro-futurism is a concept that has been explored in film, contemporary art, music and literature. Works by George Clinton, Jean Michel Basquiat, Public Enemy , and even Black Panther, ideology of Ra's intergalactic jazz.

His music during the late fifties and early sixties. This approach is deconstructionist jazz bridge can clearly be Observed on albums Jazz in Silhouette, Lanquidity, Atlantis , and in this case The Magic City . The compositions are featured on the basis of the pervasive reformation of jazz.

One of Sun Ra's bridge defining releases during his Free Jazz Era is his 1966 album The Magic City . The album's name is a reference to Ra'shome town, Birmingham, Alabama. More details on "Birmingham, The Magic City". According to John F. Szwed, author of Space is the Place: "The ae and child," Sonny could look out the window and see the Magic City. "It's rather ironic that this album is so closely related to Ra 's hometown, because it is a citizen. Saturn, an otherworldly and an angelic figure. spread his music. The Magic City is, in essence, and the reimagining of Birmingham. According to Ra, the near thirty minute title track is an attempt to depict Birmingham without a cruel, grim, and racist past. It's an attempt to grant the listener a glimpse at a city devoid of its flawed and corruption history. However, the idyllic and utopian imagery is juxtaposed by aggressive rampages of free-jazz improvisations. This creates a kind of dichotomy between Ra and his band. The album is mainly built on Ra and his ensemble. raplays longer more scripted moments that function as interludes to surreal and chaotic improvisations. He would then point to the album for the album. Juxtaposed idealized and realistic versions of this city. Ra felt that this emphasis on spontaneity would lead to more impassioned performances, and it certainly certainly did.

The Magic City is built almost completely. In essence, The Magic City is Raand his Arkestra's collective experience in Birmingham. This album brilliantly displays the potential of free jazz and avant-jazz. To me, it stands as one of the boldest conceptual experiments in the entirety of free jazz and is a personal favorite of mine. If you like Sun Ra's hectic and utterly insane jazz compositions, in the intergalactic veneer, then you'll probably enjoy this album quite a bit. If you do not like Sun, Ra and free jazz, then you will find a hellish and unpleasant experience.
Posted by Zen Archer at 3:59:00 PM