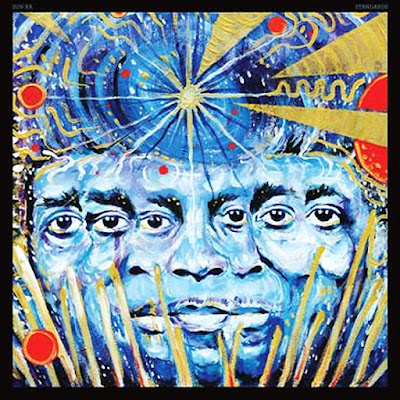 
Sun Ra, the extraordinary, outlandish, and sometimes controversial pianist, is often described as an “acquired taste”, with a massive and diverse catalog. This release is a good place to start for uninitiated or dismissive listeners. The album showcases Ra’s grounding in the jazz tradition, with unique takes on standards like “Time After Time,” “Easy to Love,” and “But Not for Me”. Not unordinary for Sun Ra, the recording process was informal; “Can This Be Love?” was recorded in his Chicago apartment in 1955; he is accompanied only by the great Wilbur Ware on bass. The other five tracks, which feature, among others, Ra’s longtime associate John Gilmore on tenor saxophone, were recorded at the Choreographer’s Workshop rehearsal space in 1962 and 1963. The album is finally receiving its first ever vinyl release with a psychedelic color pressing, exclusively for Record Store Day 2018.

A really unusual setting for Sun Ra – given that the legendary jazz figure is working here on a host of American songbook standards – and not the cosmic tunes of his own creation! And yes, as you might guess, there's an offbeat feel to almost all the performances here – which stand as a great way of illustrating the deep respect for jazz history that Ra had, even though he was always pushing the music in different directions! There's a number of moments that are quite respectful of the melodies, while others are a bit more offbeat

Jazz great Sun Ra (born Herman Blount) has an imposing reputation as the iconoclastic purveyor of wildly unusual and unconventional music. His influence is felt far beyond the confines of jazz, and that influence encompasses more than music: his attitude, his onstage sartorial choices and his self-mythologizing were all part of what made Sun Ra important.

No one know how many albums Sun Ra recorded and released; informed estimated put the number at well over 100. Many of those were in pressings of a mere 75 copies. And his interstellar preoccupation is well-documented on many records. But one of his more unusual – and, paradoxically, one of his most conventional – releases is Standards. Like any Sun Ra LP, it’s tough to definitively peg its release date, but it seems to have first come out on CD in 2001.

Standards is drawn from at least two distinct performance. The recording of “Can This Be Love?” dates from 1955 and feature Sun Ra on piano with Wilbur Ware on upright bass, captured on tape in the pianist’s Chicago apartment. Though the fidelity is quite similar (and fine at that) the remaining tracks date fomr the middle of the 1960s, and feature a small ensemble of Sun Ra plus longtime associate John Gilmore and Walter Miller, Ronnie Boykins and Lex Humphries or Clifford Jarvis on drums.

The faithful and tuneful readings of well-knows standards – an uptempo run-though of Jule Styne and Sammy Cahn’s “Time After Time,” George Gershwin’s “But Not for Me” and so on – may shock and surprise Sun Ra aficionados weaned on a diet of discs like Super-Sonic Jazz and We Travel the Space Ways, but Standards shows an accessible side of the man, a characteristic not often explored.

Standards is recommended for those wanting to get into the music of Sun Ra, but they should do so with the understanding that – wonderful as it is – it’s not representative of his body of work as a whole. The Record Store Day 2018 release — the album’s first-ever on vinyl — features new cover art and off-white swirl vinyl that may bring to mind a tasty dish of strawberry ice cream.

A terrific document: the highly eccentric, controversial pianist performs standards under the most informal circumstances. "Can This Be Love?" was recorded in Ra's Chicago apartment in 1955; he is accompanied only by the great Wilbur Ware on bass. The other five tracks, which feature, among others, Ra's longtime associate John Gilmore on tenor saxophone, were recorded at the Choreographer's Workshop rehearsal space in 1962 and 1963. The recording quality is more than passable, and the music is swinging from beginning to end. "Time After Time," "Easy to Love," and "But Not for Me" are all played faster than usual.

Those who dismiss Ra's original music will need to digest these recordings, which clearly demonstrate Ra's (and Gilmore's) grounding in the tradition. Admittedly, however, Ra is a bit all over the map during his solo on "But Not for Me."