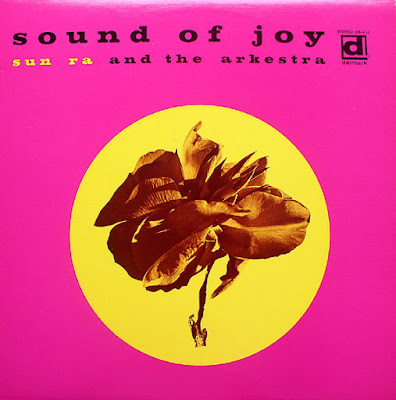 
The cover states this was recorded in November 1957. However, in the Sun Ra Omniverse book, Robert L. Campell wrote that this was recorded "toward the end of 1956."
This material was originally recorded for the Transition label, but they folded before the album could be released.
Six of these compositions were first released on Visits Planet Earth in 1966. Tracks A3, B2, B3 and B4 are the same recordings as on that LP. Tracks A2 and A5 are present in different recordings from another session on that LP.

The history of the record - Ra recorded it in 1957 for Transition, but they went out of business and it didn't come out until 1968. Transition did release a Ra album in 1956, "Sun Song", before they went under. So Ra had practically no visibility in the consumer market until the late 60's, while making incredible music. He released two albums on his own Saturn label (small-scale)in 1956 and 57, "SuperSonic Jazz" and "Jazz in Silhouette", and later released many sessions from the late 50's on his Saturn label; these are now available on CDs on the Evidence labels. One Saturn that he put out in 1967 (before this material had been issued by anyone) contained 4 of the tracks recorded here ("Sun Ra Visits Planet Earth", Side B of the Saturn LP and tracks 1 - 4 of the must-have Evidence CD).
The session here is a good one though I feel the mastering is not as good as on the louder Evidence releases (the 4 tracks lifted from here sound stronger on "Visits Planet Earth", with all frequencies boosted). Had this been released in 1957, it could have and should have been well acclaimed and might have thrust Ra into the limelight. The tracks are lovely orchestrated big-band jazz.

Recorded in December 1956, the second album Ra recorded for Tom Wilson’s label is a much more sedate affair than Jazz by Sun Ra and Supersonic Jazz, both recorded earlier in the year. The frantic pace of some of the first album is mostly absent, as are the more typical big band arrangements. The first half focuses more on Ra’s idiosyncratic compositions, which do not sound like the jazz music of the day and some have taken to comparing to the type of music known as ‘exotica.’ The band are clearly having a lot of fun with these pieces, and it’s hard not to burst out laughing with all of the daft ‘chinese-isms’ of ‘Overtones of China’, assisted and abetted by one member of the band clearly going beserk with a bunch of gongs.

Side A includes one fairly typical hard bop tune composed and performed by the two baritone sax players in a quartet setting, and the second side focuses on more typical ‘jazz’ like sounds. Unfortunately, I find the second side’s opener, ‘Ankh’, to somewhat drag for the first half, and I find it really doesn’t help the flow of the album. It’s a corny sounding melody over a fairly slow swing beat. Perhaps Ra himself sensed this, as when it’s his turn to solo he delivers one of his most bonkers sounding solos yet and thereafter a second theme is introduced by the horns and the piece is much improved. ‘Saturn’ and ‘El Viktor’ are wonderfully convoluted jazz performed at a cracking pace, although the former isn’t quite as energetic as the version recorded and released earlier in the year as a single.

The playing is a lot looser here than Sun Song too, the Arkestra feel a lot more at ease and you can hear all the performances come through. This improved dynamic allows Sun Ra's piano to come out in a way that's really gorgeous--it's something I often miss on his other albums (though check out his live 77 solo piano performance!)

It's worth mentioning that a lot of the Sun Ra standards are here (Two Tones, Ankh, Saturn, Reflections in Blue...plenty of songs will hear again in different iterations.) What we end up with then is an early collection of some of Ra's best songs with some really solid performances that actually swing!

With Sound of Joy, everything just seems to be right. I think Angels and Demons may be a stronger release as far as pushing the arkestra ahead musically, but being progressive isn't all that counts. Sound of Joy finds the middle ground and makes a small masterpiece out of it.

One caveat for the collector: about half the tracks here are also collected on the Evidence CD 'Visits Planet Earth / Interstellar Low Ways', so if you already have that disc, this might be a tough purchase. Unfortunately, one of my favorite songs here doesn't make it on to the Evidence disc.
Posted by Zen Archer at 2:12:00 PM