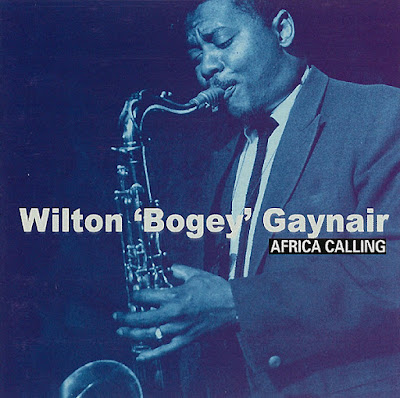 Unreleased album that follow up to the "Blue Bogey" album on Tempo.
Recorded at IBC Studios, London, June 1960.

Jamaican tenor saxophonist Wilton "Bogey" Gaynair, whose passionate double-barrelled playing (and take no prisoners technical facility) illuminated the British hard bop scene in the late '50s, is today more or less forgotten. He made one headlong charge of an album, Blue Bogey, in '59, before disappearing into obscurity (or to be precise, into Germany, which at the time amounted to the same thing). He resurfaced for a short while in the early '80s with Kenny Wheeler and Alan Skidmore in Third Eye, before returning to steady, but internationally uncelebrated work in Germany.
Yet if either Blue Bogey or its followup, Africa Calling—the latter now released for the first time ever, since the original commissioning label Tempo went bust shortly after the sessions—had been recorded for Blue Note, they'd be sitting alongside the Dexter Gordon and Jazz Messengers classics in your collection today, Rudy Van Gelder would have made a remaster, and Mosaic would have put together The Complete Blue Note Sessions Of Wilton Gaynair. They really are that good.

Like its predecessor, Africa Calling is a cannon blast of uncompromising hard bop, out of Coleman Hawkins and Don Byas via R&B and the blues. The closest thing to a ballad is the merely mid-tempo "Rianyag"; every other track is a rush of big-boned bravura tenor. Even "The Way You Look Tonight," a ten-minute joust between Gaynair and a spectral Illinois Jacquet, and the only non-original on the album, is taken at a pace. The rhythm section is deeply and astonishingly soulful; pianist Terry Shannon was in '60 the local contemporary equivalent to Horace Silver and Sonny Clark, and his playing is as exuberant and alive as Gaynair's. But it's Gaynair who is centre stage most of the time, and he roars and soars from start to finish.

Gaynair, who died in '95, was an alumnus of Kingston's famed Alpha Boys School, along with Joe Harriott and Dizzy Reece and ska stylists Don Drummond, Rico Rodriguez and Cedric "Im" Brooks. On leaving Alpha, he started his career solidly on the good foot, working with Ossie Williams in a forerunner to Count Ossie & The Mystic Revelation Of Rastafari, before moving to Europe in '55.

There isn't a trace of reggae on Africa Calling, but there is a heap of blues, roots and passion. A masterpiece, restored to us at last.
Posted by Zen Archer at 4:57:00 PM