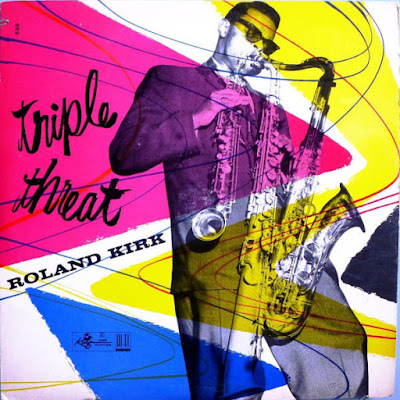 Arguably the most exciting saxophone soloist in jazz history, Kirk was a post-modernist before that term even existed. Kirk played the continuum of jazz tradition as an instrument unto itself; he felt little compunction about mixing and matching elements from the music's history, and his concoctions usually seemed natural, if not inevitable. When discussing Kirk, a great deal of attention is always paid to his eccentricities — playing several horns at once, making his own instruments, clowning on stage. However, Kirk was an immensely creative artist; perhaps no improvising saxophonist has ever possessed a more comprehensive technique — one that covered every aspect of jazz, from Dixieland to free — and perhaps no other jazz musician has ever been more spontaneously inventive. His skills in constructing a solo are of particular note. Kirk had the ability to pace, shape, and elevate his improvisations to an extraordinary degree. During any given Kirk solo, just at the point in the course of his performance when it appeared he could not raise the intensity level any higher, he always seemed able to turn it up yet another notch.

Kirk was born with sight, but became blind at the age of two. He started playing the bugle and trumpet, then learned the clarinet and C-melody sax. Kirk began playing tenor sax professionally in R&B bands at the age of 15. While a teenager, he discovered the "manzello" and "stritch" — the former, a modified version of the saxello, which was itself a slightly curved variant of the B flat soprano sax; the latter, a modified straight E flat alto. To these and other instruments, Kirk began making his own improvements. He reshaped all three of his saxes so that they could be played simultaneously; he'd play tenor with his left hand, finger the manzello with his right, and sound a drone on the stritch, for instance. Kirk's self-invented technique was in evidence from his first recording, a 1956 R&B record called Triple Threat. By 1960 he had begun to incorporate a siren whistle into his solos, and by '63 he had mastered circular breathing, a technique that enabled him to play without pause for breath.

In his early 20s, Kirk worked in Louisville before moving to Chicago in 1960. That year he made his second album, Introducing Roland Kirk, which featured saxophonist/trumpeter Ira Sullivan. In 1961, Kirk toured Germany and spent three months with Charles Mingus. From that point onward, Kirk mostly led his own group, the Vibration Society, recording prolifically with a range of sidemen. In the early '70s, Kirk became something of an activist; he led the "Jazz and People's Movement," a group devoted to opening up new opportunities for jazz musicians. The group adopted the tactic of interrupting tapings and broadcasts of television and radio programs in protest of the small number of African-American musicians employed by the networks and recording studios. In the course of his career, Kirk brought many hitherto unused instruments to jazz. In addition to the saxes, Kirk played the nose whistle, the piccolo, and the harmonica; instruments of his own design included the "trumpophone" (a trumpet with a soprano sax mouthpiece), and the "slidesophone" (a small trombone or slide trumpet, also with a sax mouthpiece). Kirk suffered a paralyzing stroke in 1975, losing movement on one side of his body, but his homemade saxophone technique allowed him to continue to play; beginning in 1976 and lasting until his death a year later, Kirk played one-handed.

The debut album by jazz multi-instrumentalist Roland Kirk, originally released on King [this submission], re-released in US in 1962 on Bethlehem as Third Dimension and in 1976 again on Bethlehem Records as Rahsaan Roland Kirk - Early Roots and in UK on Affinity. The original album received limited distribution and only became widely known after the Bethlehem Records re-issue, a few years prior to Kirk's death.

Kirk's debut shows an intriguing willingness to experiment within the established jazz idiom
"Triple Threat" is the debut album by multi-instrumentalist Roland Kirk. Originally released on the Bethlehem label in 1957, the album features Kirk on tenor saxophone, manzello, and strich, (playing all three at the same time in some instances!) along with pianist James Madison, bassist Carl Pruitt, and drummer Henry Duncan.

The music introduces Kirk's innovative concept of playing multiple reed instruments at once, harmonizing the bluesy melodies of pieces like the opener, "Roland's Theme" and "Slow Groove." In the latter, Kirk even harmonizes with himself occasionally during his solo, which also stays largely within the realm of blues language. "A la Carte" and the closing track, "Triple Threat" have the familiar upbeat, "jump jazz" feel and Kirk makes good use of his harmonizing concept to build the intensity of the simple melodies of the pieces. The rhythm section plays competently, though never very imaginatively (other than a very nice piano solo on "Roland's Theme).

The classics "Stormy Weather," and "The Nearness of You," are interesting for their use of overdubbing, which was still a fairly unexplored technique in the world of jazz recordings at the time. Kirk uses the overdubbing to solo with himself on the three woodwind instruments, an approach which works fairly well on "Stormy Weather," though "Nearness" becomes somewhat cluttered and aimless. Another result of the busy overdubbing of the horns is that the rhythm is pushed even more to the background and is relegated to a mere timekeeping role.

It's an interesting debut, with plenty of innovative ideas and generally solid playing. Kirk shows that he has plenty of interest in experimentation and pushing the boundaries of jazz recording, and even though not all of the experiments are completely successful, the album is still certainly worth a listen for fans of Kirk, or for those interested in exploring his early music that set the stage for his later experimentation.

When the pre-Rahsaan Roland Kirk stormed the jazz scene in the mid-'50s, certainly nobody was ready for his virtuosity, as he demonstrated ability, not gimmickry, to play the tenor sax, manzello, and stritch simultaneously. Triple Threat is his introductory foray into this arena, as he presents a program of half standards and half his basic bluesy originals taken into this upper realm of multiphonic capacity. Of the covers, the ballad "Stormy Weather" has Kirk playing counter-melodies rather than harmonics on his horns, and it is remarkable. "The Nearness of You" is a bit distant in its production values with Kirk using tentative or staggered phrasings, and "Easy Living" has the lead played on the manzello, with the multiple horns only on the final phrase of the melody. The originals are pretty simple, with a repeat swing groove setting off the jam "Ronald's Tune" and Kirk working the controlled, non-exploited harmonics of the three woodwinds on "Slow Groove"; using a happy shuffle R&B feeling on mostly tenor for "A La Carte"; and finishing up with the now famous 12-bar blues bopper "Triple Threat," which was his signature dish. The liner notes of this recording have always been irritating bordering on condescending, implying that the tenor sax was always a more popular instrument and misidentifying the manzello and stritch as a "straight alto" and "straight soprano" when they were actually distinct instruments, exclusively played by Kirk. No matter -- this is a marvelous introduction to the greatest soloist in the history of jazz and, despite its very short running time (under 30 minutes), is a true pivot point in modern music.