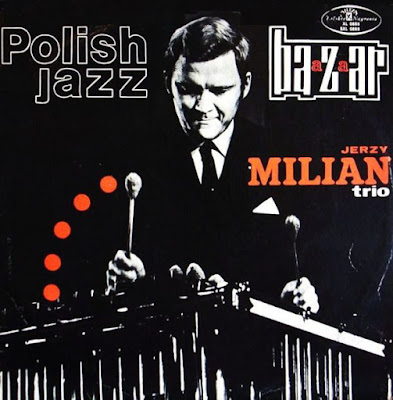 One of the most important albums in the history of Polish jazz. The trio under the leadership of eminent vibraphonist does cross stylistic, acoustic and formal boundaries. Bach-like cadences combine with hot swing, while orient-inspired improvisations with serialism. Classics!

Released in 1969 as part of the legendary Polish Jazz Series by the state owned Polskie Nagrania / Muza label. The album was recorded in a trio format, with Milian playing vibraphone and marimba, bassist Jacek Bednarek (who also plays the oriental gidjak on one tune) and drummer Grzegorz Gierlowski. Two members of the legendary Polish vocal quartet NOVI: Ewa Wanat (who adds vocals on five tracks) and Janusz Mych (who adds flute on one track) also participate in the recording. The original album presents eight original compositions, seven of which are composed by Milian and one is co-composed by him and Krzysztof Komeda.

In retrospect this is definitely one of the most idiosyncratic albums in the Polish Jazz Series, presenting one of the first occurrences of the Polish / European Chamber Jazz, which was an amalgam of modern Classical and Cool Jazz elements with many different less audible influences, like early World Music, Free Jazz, Ambient (before it was even called that) and others. The vocal parts by Wanat are completely spine-chilling, typical of her brilliant and unique style, which was the crucial ingredients of the NOVI magnetism. It is definitely a must to all Polish Jazz enthusiasts, wherever they might be on this globe (and beyond).
Posted by Zen Archer at 2:54:00 PM 3 comments: Links to this post