Neil Ardley
1978
Harmony of the Spheres 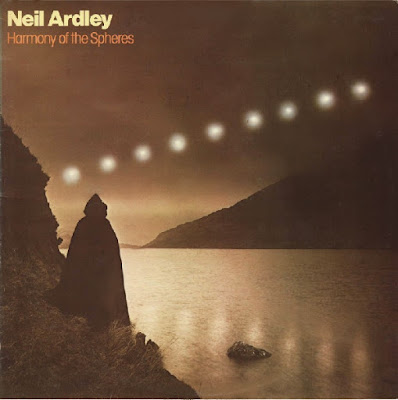 01. Upstarts All
02. Leap In The Dark
03. Glittering Circles
04. Fair Mirage
05. Soft Stillness And The Night
06. Headstrong, Headlong
07. Towards Tranqility

Recorded at Morgan Studios, London, from July to September 1978.

Neil Ardley based this 1978 album on the ancient idea of the Harmony of the Spheres, the idea that each planet produces a musical note related to its orbit. It was reasoned that, as everything in the heavens is perfect, the notes must sound together to produce a perfect harmony. Neil Ardley synthesized the actual harmony of the spheres, deriving the frequencies of the notes from the orbital periods of the planets. It can be heard in the all-synthesizer track Soft Stillness and the Night, and it is appropriately mysterious and dramatic.
The album features John Martyn on guitar over a rich orchestral sound mixing electronic with acoustic instruments and voices. Harmony of the Spheres was the subject of a 30-minute film directed by Peter Walker and shown on ITV's The South Bank Show in 1979

Harmony of the Spheres was composer Neil Ardley's final album for a major label. Released by Decca in the U.K. in 1979. This is the record many of Ardley's most ardent (no pun intended) fans and jazz purists have dismissed out of hand. Simply put, both groups are wrong. The primary reason for this dislike is two-fold: first, the ubiquitous use of synthesizers. Given that this is a conceptual recording of the title, derived from the complex notions of the ancient Greeks, Ardley could find no acoustic instruments that could actually reproduce the sounds required. He assigned musical notes to each of the planets and discovered that the ratio of the orbit times of Mercury and Pluto (assigned the highest and lowest tones, respectively, because of their distance from the sun) were virtually identical to the ratio of frequencies of the sounds of the upper and lower range limits of human hearing. That this entire schemata is only approached and achieved once on the entire album, on "Soft Stillness & the Night," is immaterial. Ardley composed an entire suite around these sounds, the "harmony" as it were, and came up with a stellar jazz-rock set, that combines some of the very finest elements of prog, jazz improvisation, funk, and rock composition to hit record stores, and sounds distinctly different from anything else in his catalog. The cast on this brilliant album includes trumpeter Ian Carr and members of his band Nucleus, vocalist Norma Winstone, Tony Coe and Barbara Thompson on reeds and winds, Geoff Castle, Trevor Tomkins, Richard Burgess, Pepi Lemer, and the utterly amazing (and largely unrecognized) Billy Kristian, whose bassline is the anchor of the entire set, and who gets in some amazingly funky playing. The other big surprise is the appearance of John Martyn on electric guitar -- playing both lead and rhythm -- his playing here goes far beyond anything to appear on his own records -- let's put it this way, he could have hung with John Goodsall of Brand X without difficulty and possesses a trunkload of soul. Check out his smokin' fretwork on the opener "Upstarts All," which complements Kristian's bass work astutely. The disjointed funk on "Leap in the Dark" would have been right at home in many clubs at the time, though its syncopation would have thrown many. Here again, Kristian shines. Carr's genius is heard bountifully on "Head Strong, Headlong," that walks a line between jazz, funk, and blues. Taken as a whole, Harmony of the Spheres is not nearly as jarring now as it was when released, and is far less a "commercial" album than it was once considered. It's a fitting testimony to Ardley's compositional and sonic genius that he employs synthesizers as not only architectural building blocks but as actual melodic instruments as well. Only a brilliant pianist and harmonist could accomplish such a thing, and Ardley was both. Luckily for us, the grand British reissue label Esoteric released this set on CD for the first time in the West in 2008.
Posted by Zen Archer at 5:47:00 PM 3 comments: Links to this post