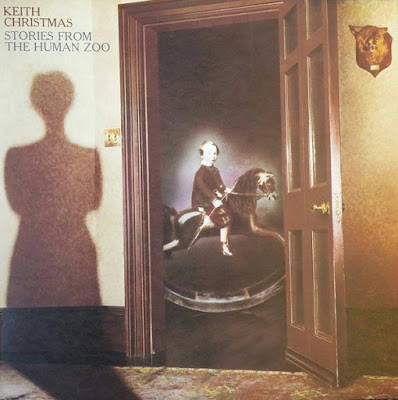 
In 1978 Keith settled into the famous Sunset Tower on Sunset Boulevard and in the 20 months that followed wrote and recorded ‘Stories From the Human Zoo‘ high in the mountains above the Pacific coast at Indigo Ranch Studios, a studio owned by Mike Pinder of the Moody Blues.

Stories from the Human Zoo was produced and engineered by Michael Boshears and features an amazing array of American musical talent in the shape of Steve Cropper and Donald ‘Duck’ Dunn from the legendary Booker T And the MG’s, with contributions from Snuffy Walden, David Kemper and Wendy Waldman.
Posted by Zen Archer at 1:46:00 AM 1 comment: Links to this post 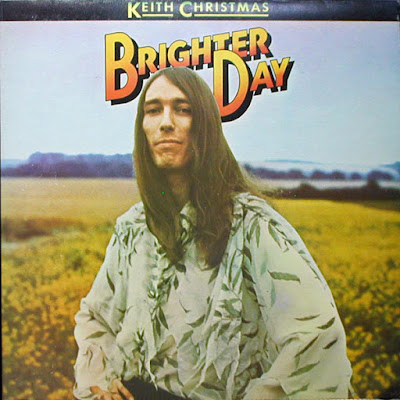 Keith Christmas first came to prominence in the early seventies following the release of his debut album in late 1969. Keith Christmas recorded two further albums with help in the recording studio from the band Mighty Baby and toured in support of those albums with the likes of the Who, Ten Years After, King Crimson and Roxy Music. It was also during this period that Keith famously played on the David Bowie album Space Oddity and featured at the first Glastonbury festival in 1971. In early 1974 Keith temporarily abandoned his solo career for a short stint as vocalist with the Esperanto Rock Orchestra and singing on the album Danse Macabre. Following this album Keith returned to solo work and was signed to the Manticore label, which was the label, owned and managed by Emerson Lake and Palmer. This album was produced by Greg Lake and Pete Sinfield and also featured a stellar cast of supporting musicians including the likes of former King Crimson members Ian McDonald, Mel Collins and Ian Wallace and former members of the Grease Band Alan Spenner and Neil Hubbard. Two singles were released from this album and although sadly neither single made the singles chart although both are now quite collectable The American version of the album differed from it's British counterpart in that it featured the track My girl in place of the track Getting' Religion. The album was well received and Keith appeared on the British television programme The Old Grey Whistle Test and performed two tracks from the album one of which was Robin Head to promote the album. Following the release of Brighter Day Keith moved to Los Angeles where his second and final album for Manticore was recorded. Following this album Keith returned to playing low-key gigs and in the early eighties tired of the music business and retired until the late eighties when he re emerged and both recorded a number of albums and performed regularly as he does to this day.
Posted by Zen Archer at 1:36:00 AM 1 comment: Links to this post 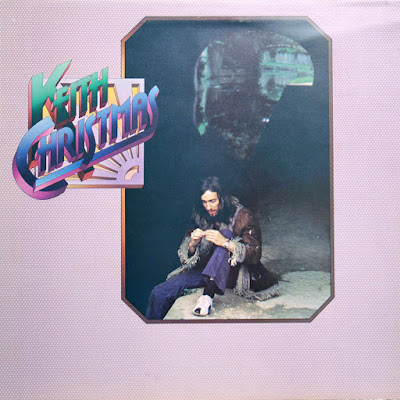 Acid Folk is one of those musicological genre headings that had to be invented retrospectively because it didn’t exist when the music it describes was extant in the late sixties. These days it’s taken to cover the acoustic singer-songwriter individuals and combos who sprang from Dylan-inspired folk-pop roots, picked up psychedelic overtones and morphed into the complexity of prog-rock – which satisfyingly describes Keith Christmas’s most creative period, up to and including Pigmy.

Originally an Essex lad, Christmas was an undergrad at Bath University (coincidentally my own alma mater at around the same time, though we never met) where he studied Building Technology in between extensive gigging on the vibrant London and Bristol folk club circuits. Never a true folkie but certainly influenced by the likes of Bert Jansch and John Rembourn, he combined an enviable fingerstyle technique on an unfashionable but strident Fender Palomino with hippie bedsitter lyricism and a reedy but distinctive voice, a combination also evident in the work of his contemporaries Nick Drake and Al Stewart. The schizophrenic nature of Keith’s career at this time – recording with session musicians but invariably gigging solo – is mirrored in the three albums he cut between 1969 and 1971, these setting his formidable acoustic guitar work alternately against orchestral ensembles and jazzy rock band backings.

Christmas has disowned his first album, 1969’s vaguely country-rock Stimulus, recorded with musicians from Mighty Baby and pedal steelist Gordon Huntley, as “overproduced”; I’d say it was rather a venture in an unsuitable musical direction for the man. He hit his stride eighteen months later with the second, Fable Of The Wings, recorded with session musicians with folk-rock credentials, which subsequently established the folk-baroque-prog template for which he’s best remembered today. There’s little to choose quality-wise between this and the ensuing Pigmy, which for me just has the edge, offering immaculate, restrained orchestral arrangements by Robert Kirby (who did the same for Nick Drake) and the LSO on its first side of introspective ballads, notably the earnest but cerebral “Timeless And Strange”, and powerful keyboards from Rod Argent and bass from Fuzzy Samuels on the other side’s trio of extended classy rockers, culminating in the extraordinary “Forest And The Shore” with its swelling, Ligeti-like choral interludes. Keith’s acoustic shimmers like a harpsichord on the top side, and his ferocious acoustic rhythm work on the flip is leavened with some fluid electric soloing. The album artwork shows him appropriately framed by a Narnia-like background, wispily-bearded, Afghan-coated and apparently rolling a joint, the true zeitgeist of the period.

Although critically his best-received works, neither Fable nor Pigmy sold in droves at the time, and after an even less successful move in a rock/soul direction Christmas threw in the professional music business. While his contemporaries Al Stewart and Nick Drake had gone on to contrasting fates – one to superstardom in LA, the other to clinical depression and an untimely death – Keith became a renovator of old houses and eventually a schoolteacher, settling in a pleasant village near Bristol and making music for his own pleasure, issuing privately-recorded small-circulation albums at intervals and occasionally gigging local pubs and small venues, his acoustic guitar mastery undiminished. Stimulus has been bootlegged for CD, but Fable and Pigmy remain unreissued and are now great rarities on vinyl; however, almost their entire contents are available on the excellent Castle compilation CD Timeless And Strange, whose title encapsulates his music of that period and which is available direct from Keith himself at his website.

Keith Christmas -
1970
Fable Of The Wings 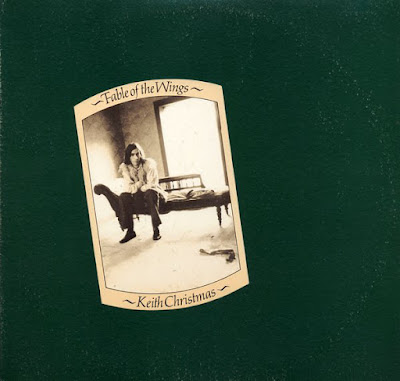 Keith Christmas recorded his first album 'Stimulus' back in 1969 when he also played the acoustic guitar on David Bowie's first album 'Space Oddity' and appeared at the first Glastonbury Festival. Throughout the seventies he recorded four more albums 'Fable of the Wings', 'Pigmy', Brighter Day' and 'Stories from the Human Zoo' while touring with and supporting acts like the Who, King Crimson, Ten Years After, Frank Zappa and Roxy Music. This was Keith's second album and was released in 1970.

While Keith Christmas' second album was an improvement over his debut, there was still the sense that it was a stretch of his talents to fill an entire record with decent material. In its favor, it had some nicely integrated, varied arrangements that show more imagination than many other British folk-rock recordings of the early '70s: the jazzy piano-dominated vamp of "Waiting for the Wind to Rise," the lovely female backup harmonies on "The Fawn," the languid tempo of "Lorri," the gothic organ of "Kent Lullaby," the Mellotron-acoustic guitar-piano combination of "Hamlin," the rapid whirl of acoustic guitar picking on "Fable of the Wings." About half of the songs were mighty pretty, particularly "Hamlin" and the delicate "The Fawn." Christmas was good at establishing an attractively melancholy musical setting, but his rambling lyrics just couldn't hold up their part of the weight, and he was given to tracks that went on and on for way too long before fading, particularly on "Waiting for the Wind to Rise." 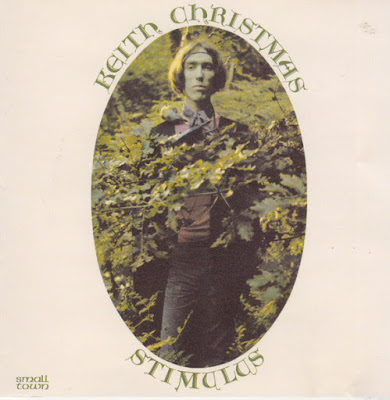 Stimulus was originally released in 1969 on the RCA label and is a true lost treasure of the 60s. Here we see Keith backed by members of Mighty Baby as well as Matthews Southern Comfort's pedal-steel guitarist Gordon Huntley who, all together, have created a beautifully styled gem of the late 1960's.

As was popular at the time, the emphasis on long tracks Trial & Judgement and / Know You Can't Loose showed off Keith's great songwriting ability and the gift for extended musical musings. 1969 was a busy time for Keith as with the release of Stimulus he also found time to play the acoustic guitar on David Bowie's first album Space Oddity and later appeared at the very first Glastonbury Festival.

Fable Of The Wings and Pigmy followed in the next few years, during which time Keith toured with many of the top bands of the day, including the Who, Ten Years After, King Crimson and Roxy Music.

In 1974 he joined the Belgium-English 70's rock band The Esperanto Rock Orchestra as their vocalist and appeared on their 1974 album, Danse Macabre, produced by Pete Sinfield.

That same year Keith returned to solo work and produced Brighter Day which was issued on the same label as Pete Sinfield, which was Emerson, Lake and Palmer's Manticore label.

This release offered a tougher perspective than previous albums while Stories From The Human Zoo, recorded in Los Angeles and released in 1976, featured assistance from several American musicians, including Steve Cropper and Donald 'Duck' Dunn.

After taking time out from the music scene in 1981 Keith re-emerged at the end of the 80's with a fresh outlook, rejoining the folk club circuit with renewed enthusiasm and back to the recording studio. Forming the blues band Weatherman in 1991 he issued an album the following year.

In 1996 the excellent Love Beyond Deals was released on the famous HTD label. Love Beyond Deals was produced by Ashley Hutchings and featured a fantastic collection of guests from the folk world . Yet another change of direction was to follow with a highly acclaimed instrumental album Acoustica in 2003.

2006 and Keith releases his first ever truly solo CD Light of the Dawn and just continues to tour and release material and has been described as 'a songwriter at the peak of his powers'. 2011, and a 5 track EP called Fat Cat Big Fish was released and even this year as we go full circle from Stimulus to the present day. Check out Keith's 2012 album Live at the Pump for a continued journey into the wonderful world of a true all-round singer songwriter of our time.
(Liner notes)
Posted by Zen Archer at 1:07:00 AM 1 comment: Links to this post