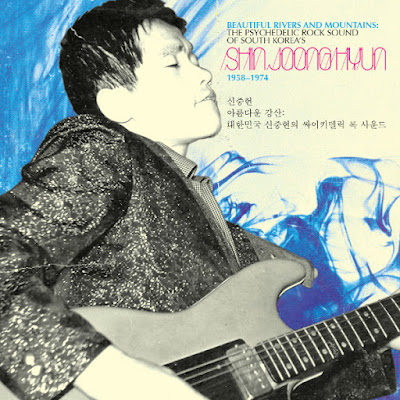 
Shin Joong Hyun’s tale is personal, spiritual, and deep, not only reflecting the full spectrum of human emotions, but one that produced reverberating echoes of sound, some beautiful and life-giving, others restless and ungovernable. For the first time outside of Korea, Shin’s music will be readily available to music lovers the world over. Light In The Attic are thrilled to release Beautiful Rivers And Mountains: The Psychedelic Rock Sound Of South Korea’s Shin Joong Hyun, a career spanning CD, 2xLP, and Digital Download compilation of the diminutive guitarist, songwriter, producer, arranger, and talent developer.

Inspired by jazz, soul, and traditional Korean music, Shin started his career in the mid-1950’s, performing for US troops stationed locally after the Korean War armistice of 1953. While his English language skills were limited, the young player had no trouble communicating through his trusty electric guitar, but Shin was no mere 6-string slinger for hire, he was able to communicate something far beyond your average professional musician. Production work and extensive songwriting followed, not to mention a steady stream of electrifying performances. Gaining momentum by the moment, Shin developed popular success across South Korea molding protégés like singing duo the Pearl Sisters and folk-psych songbird Kim Jung Mi into top pop stars. From there it was hit after hit. The late 1960’s rock explosion and an influx of imported music from The Beatles, Jimmy Smith, and The Jefferson Airplane all informed and inspired Mr. Shin to elevate his own craft. Even experimental trips via a crew of local hippies also took the music man to new heights despite Korean law forbidding such rebellion. Drug use was illegal and punishable as a serious offence. Park Chung-hee, then President of South Korea began to closely monitor Shin’s “subversive” activities. After refusing to write a song in praise of the political leader, the musician was labeled unpatriotic and his career was instantly snuffed-out through a series of surveillance, torture, and institutional confinement.

If US hadn't had military bases in Korea, providing income and inspiration for Shin to explore rock and soul music, he might never have developed as a musician.

According to one story I heard, Shin was actually invited to the US by an American record company interested in his talent... but his manager hid the invitation from him for a year, lest his cash-cow leave the country. That could have been his "Jimi Hendrix goes to England" moment... but it wasn't.

Also, if timing had worked out a little differently, he wouldn't have become the Korea legend he is at all: he'd signed a contract and taken the payment to travel to Vietnam to perform for American troops there, when word came to his manager that The Pearl Sisters' song "Nima" was his first real hit, and he decided to wiggle out of his contract, stay in Korea to keep trying as a producer and songwriter. A few days one way or the other and he would not have been in Korea at all to become what he became for Korean music.

Shin's singers kept leaving him as soon as they got famous. He simply never found the right muse or collaborator, the way Keith Richards found Mick Jagger and Jimmy Page found Robert Plant. We could speculate on reasons why his groups never stayed together, but the fact is he never had a band lineup together for longer than a few years, and every new vocalist meant the old songs might not fit.

Maybe if he'd been a bit better of a vocalist himself, he wouldn't have needed that, or if he'd done things a little differently whilst collaborating, or found a vocalist with the right temperament, one of his singers would have stuck around to be his Mick Jagger... who knows? But the fact is, he had to keep starting from scratch.

If he'd just recorded a song kissing President Park Chung-hee's ass that one time, the entire narrative of Korean rock music could have been completely different, and the (great though they were) Korean singers of the early 80s could have been starting from a much more interesting place than from scratch. I mean... (looks around nervously) say what you want about artistic integrity (looks around nervously again) ...given the situation at the time, he had to know what the fallout of that choice would be, right?

I mean, he got cut off just as he was peaking as a recording artist and producer, truncating his "Mega Producer, Taste-Maker" phase (imagine JYP or Lee Soo-man if they like, rocked, or ... a hard rock Quincy Jones, or Phil Spector with more guitar and without criminal charges), where he could have steered the course of Korean music for decades. We got a shadow his knack for starmaking in the '80s, boosting In Sooni and Kim WanSeon, but way less than we would have if he hadn't been banished to the doghouse for half a decade, while pop music moved on without him. He might have been doing his "Sir Paul McCartney tour" right now instead of being the "Hey why doesn't everybody know about this Korean guy? He's really good!" guy.

Of all the artists on my playlists, Shin Joong-hyun is the most tantalizing, both for the amazing stuff he created, and for the sheer scope of the woulda-coulda-shouldas of his career. Imagine if Brian Wilson were a little more mentally stable. And could rip a guitar riff like Keith Richards. Imagine if Jimi Hendrix were also a producer and starmaker on par with Berry Gordy Jr.. Imagine if Neil Young could also lay down a solo with the power of Jimmy Page, and also spring a dozen other popstars as a producer. What he did was enough to peg him as the #1 most influential K-pop musician in Korean music history. Who knows what Shin Joong-hyun could have been if things had broken right for him instead of always going sideways!

While this was not the end of Shin’s musical story, for an all-too-brief moment in Korean cultural history, Shin Joong Hyun and his talented accomplices laid down a trove of recordings that have slowly reverberated far from their native land. Beautiful Rivers And Mountains: The Psychedelic Rock Sound Of South Korea’s Shin Joong Hyun features Korean/English lyric translations, unseen pictures, beautiful graphic design from Strath Shepard (Pacific Standard), fully restored and re-mastered audio by Timothy Stollenwerk (Stereophonic) extensive liner notes by Kevin “Sipreano” Howes (Jamaica-Toronto series, Rodriguez, Monks, Mowest comp) and Shin Joong Hyun himself. With loving attention to detail and Shin’s full blessing, I trust you’ll find this album as addictive as a bottle of your favorite Korean soju. So let’s raise a toast to Shin and his musical life! As they say in Seoul, “Gun Bae!!!”
Posted by Zen Archer at 3:35:00 PM 2 comments: Links to this post 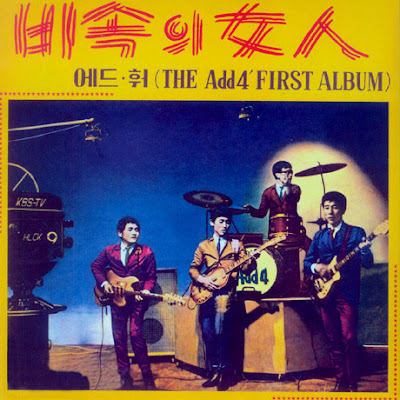 The Add 4 is considered as the first rock group formed in the Republic of Korea. This band was formed in 1962 by "the founder of Korean rock", Shin Jung-hyeon. He started his music career with a nickname called "Jacky" in the US forces Korea from 1955, when he was 17 years old. Actually, he had already published his solo album called "Hiki Shin Guitar Melody" in 1959. The reason why he is considered as the founder of Korean rock is because of not only that he introduced rock music into Korea first, but also the unique style of his music. That is why he was the first Asian artist who was given a Custom Shop Tribute Guitar by Fender(We will have more closer look at him later).

This album has really huge importance in Korean pop music history, as it was the first rock band music album in the Republic of Korea. All the songs featured in this album were originally composed by band members; in other words, there was no copy nor cover song in this album. What is more, the featured songs were brand-new considering the time period as most tracks are based on rhythm & blues style which only few has introduced in Korea at that time. The greatness of the album can be proven by numerous cover songs; especially, one of the most famous songs in this album, 비속의 女人 (The Woman in Rain) has been remade by 장현 (Jang Hyeon), 김목경 (Kim Mok Kyung) , Galaxy Express, and etc. Also, this album features 커피한잔 (A Cup of Coffee), which was later sung by Pearl Sisters who made the revival of Soul music during 1960s and 1970s. After this album, the Add 4 called themselves as 'The Ventures of Korea.'

This is a really interesting and enjoyable album from early Korean rock, under the influence of rock’n roll, late twist area, at times the pre-Beatles area mostly some tracks more in the crooner/pop song music area. The guitars are attractive and calm, the percussion is interesting as well. They play a bit like a soft rock band with a primitive honesty like in garage rock, but in a more subtle way and also a more sophisticated way of performance, more like a TV show band, while in fact with a more wild, honest and creative side. Some tracks have nice harmony backing vocals, with some small parts of well fitting backing orchestration, and occasional instruments like twist’n roll sax or piano arrangements. The more song/chanson tracks are mostly sung by a female voice. A very enjoyable, rewarding release.
Posted by Zen Archer at 3:02:00 PM 1 comment: Links to this post