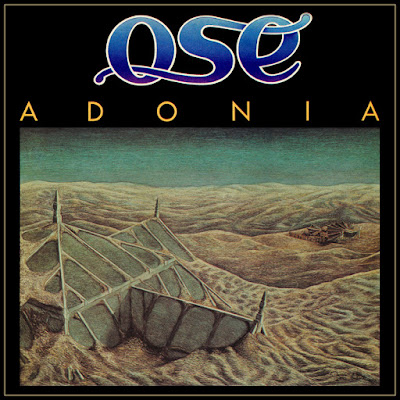 OSE was the project of French multi-instrumentalist Herve Picart. He plays moog, organ, guitar, bass and slide guitar. He also composed all the songs here. He brought in an Electronic legend and fellow country -man Richard Pinhas from HELDON who also plays guitar and moog but also sequencers and synths. Richard was responsible for arranging all of the electronic parts which of course is most of this record. Add drummer Francois Auger also from HELDON and we have an incredible trio.
This was released in 1978 the same year HELDON released "Interface" a similar album to this one but one I enjoy more for it's more powerful and dynamic sound. Same with HELDON's followup from 1979 called "Stand By", two albums I prefer to "Adonia" although the cover art for "Adonia" is one of the most beautiful pictures I've seen.

"Approche Sur A" opens with about 3 1/2 minutes of faint spacey sounds with twittering over top. This is tasteful as picked guitar joins in after 2 minutes. Before 3 1/2 minutes the song kicks into gear as we get this louder electronic beat which has a dramatic affect. The flavour changes slightly before 5 1/2 minutes. This is melodic and mid-paced and it's hard not to bob my head to this. It picks up before 7 1/2 minutes and becomes more serious sounding as the drums join in. The guitar arrives after 10 minutes ripping it up over the electronics and drums. So good! This continues almost to the end.

"Orgasmachine" opens with electronic beats as spacey synths come in over top. Slide guitar after a minute. Man this is good! Sequencers before 2 1/2 minutes as the guitar steps aside. Some brief guitar returns around 3 minutes. "29 H 08 MN" is my favourite song on here mainly because of the guitar. Solo moog to start as an electronic beat arrives a minute in and soon electronics twitter over top. The guitar arrives before 4 1/2 minutes then drums and it sounds incredible, like HELDON's two albums from this same time frame.

"L'aube Jumelle" opens with spacey synths blowing over the electronic soundscape. It's dark and melancholic. Relaxed organ joins in as the same mood continues. I think that's bass after 5 1/2 minutes as it trades off with the guitar as spacey sounds continue. Soon bass and guitar join forces in this relaxed and mellow tune. It does turn louder after 7 minutes. Beautiful stuff, quite moving.

"Retour Sur Adonia" ends the album as we get an electronic beat with spacey sounds over top. I'm not a big fan of that melody because it reminds me of something I don't like but it's brief although it is repeated later. An okay song to end it.

Not as adventerous or powerful as HELDON's two albums from the same period but man this is easily a 4 star album for me. I'm a sucker for guitar in Electronic music and the addition of drums is the icing on the cake.
Posted by Zen Archer at 12:46:00 AM 1 comment: Links to this post 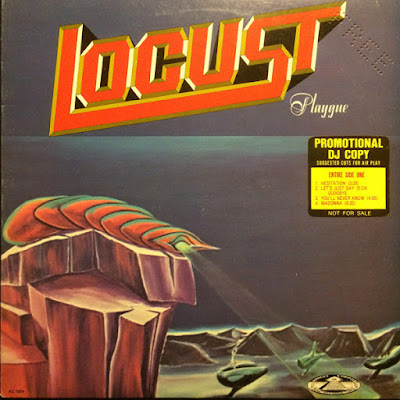 This extremely obscure proto arena rock act sprang from Iowa in the early 70's, becoming legendary in their home state while remaining unknown just about everywhere else. Their local fame brought them to Annuit Coeptus Records, who issued their sole release, "Playgue" in 1976. Though the band regularly landed supporting slots for many of the bigger acts touring through Iowa, they never managed to break through to very many other regions outside of the midwest.

So what about the music? Taking on a sound remiscent of Morningstar or early Styx, the band assembles an interesting batch of songs that seem complex in places, yet underdeveloped. With capable vocals, quirky melodies and pitch perfect harmonies, they certainly had the chops to do something spectacular. As it stands, though, "Playgue" is an unremarkably pleasant affair through and through. With lackluster production that sounds more like something engineered in the 60's, alot of the music here suffers from bad sonics. Had the production values been more contemporary, perhaps Locust could have developed their sound more elaborately. The band did split a few years later, frustrated by lack of visibility and not much is known about the members subsequent activities, though bassist Court Hawley would end up in macabre theatrical metal act, Impaler, almost a decade later. 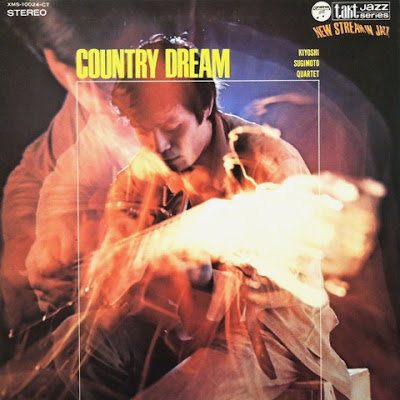 First solo album recorded for the New Stream In Jazz collection of the Columbia' Takt Jazz Series, by one of the most finest japanese jazz guitarist. Sugimoto who was sideman for Yuji Ohno, played also with trumpeter Terumasa Hino, worked for arranger Norio Maeda, but best known as a member in group, the Count Buffalos of drummer Akira Ishikawa. The Kiyoshi Sugimoto Quartet features Motohiko Hino, Yoshio Ikeda and Hiromasa Suzuki in charge of arrangements. Titles include only compositions of Hiromasa Suzuki except Country Dream by Kiyoshi Sugimoto. All tracks arranged by Hiromasa Suzuki.
Posted by Zen Archer at 12:01:00 AM 4 comments: Links to this post