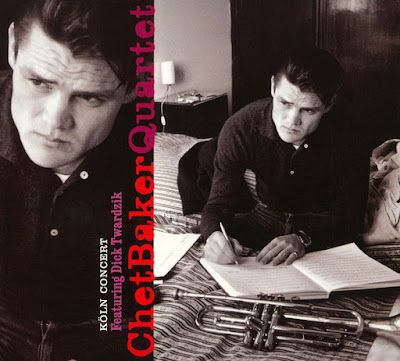 16 page booklet including an interview with Chet Baker by Gudrun Endress for the Jazz Podium magazine, 1978.

Unreleased for half a century -- and worth the wait. Documenting a complete West German live appearance from October 9, 1955 (including an announcement from promoter Gigi Campi and some impromptu dialogue from Chet Baker himself), The Köln Concert Featuring Dick Twardzik captures a harder, more soulful dimension of the trumpeter's work absent from his concurrent studio dates. There's real heat simmering below Baker's icy-cool tones, and he invests familiar compositions like "Imagination" and "I'll Remember April" with new verve. No less notable is his support staff, featuring pianist Richard Twardzik in one of his final performances before his fatal heroin overdose just 12 days later. His contributions here are shapely and supple, each note a poignant reminder of the immense talent he squandered away.

This is an entire live show recorded on the Chet Baker Quartet's 1955 tour of Europe. The show is recorded in decent sound for 1955. Obviosly, it's in mono. The horns, piano and drums are well heard. The bass is maybe a bit muddy. Probably a little better sound than Bird at the Hi-Hat. Maybe a little lower fidelity than the Konitz with G. Mulligan Quartet, (Pacific-Blue Note), disc. If you never heard of Dick Twardzik, figure that Bird performed with Twardzik and dug his playing. (That's a testimonial likely to stir me to want to listen). Chet Baker announces Yellow Tango, (one of Twardzik's compositions) as a feature for Twardzik and rhythm section, Pete Littman (d) and 007 (b). The quartet also has guest saxophonists, one of them being Hans Koller, joining the quartet for the last few tracks. There is a little bit of tape garble/distortion/drop out during a few seconds of the sax solo during one of those ensemble pieces. The liner notes are rather critical of the performance. I personally believe, Twardzik's efforts are nascent avante garde and the fans and critics wern't quite ready in 1955. (Be reminded Cecil Taylor's, first album was in 1956.)

All that being said, this cd presents a decent performance by a highly talented working jazz group near their collective peak in respectable sound. Sadly, the young pianist with the quartet, Dick Twardzik, wasn't long for this earth. He died October 21 of that year. This cd presents a welcome addition to the Twardzik trio material previously available on the Pacific label and the Chet in Paris Vol. 1 material featuring Twardzik previously available on the Barclay label.
Posted by Zen Archer at 7:02:00 PM