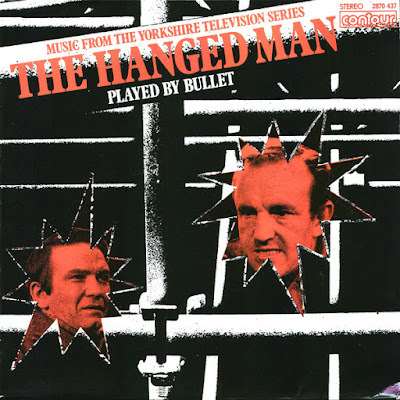 Bullet is the band with the performer credits for 'The Hanged Man' soundtrack. The music for this soundtrack was composed by Alan Tew and all cuts were taken (and re-edited) from two library records from the Themes International imprint Alan Tew - Drama Suite Part I & Alan Tew - Drama Suite Part II .
The members of Bullet were session players (for KPM Music and Themes International Music): Les Hurdle (bass), Barry Morgan (drums), Alan Parker (Guitar), Frank Ricotti (percussion) and Alan Hawkshaw (keyboards) with additional members of the Max Greger Orchestra (brass and reeds). The score for 'The Hanged Man' (their only long player as Bullet) was recorded in Munich, Germany.